BEIJING – James Palmer, a journalist from Beijing, reports about the ongoing plight of the disabled in China. His article deserves attention:

“95% of orphans in China have special needs,” quotes James Palmer from one of his sources. They are disposed of by their parents who, in China, mostly are allowed only one child. Ideally that should be a boy –a healthy one. Most handicapped have little access to education, and, so Palmer’s argument, there’s a pervasive lack of empathy for their struggle.

Famously, during the Beijing Para-Olympics 2008, China’s handicapped were briefly paraded and showcased to the world’s media. China eventually raked in 211 medals, including 89 gold. That was more than Great Britain and the United States combined (which ranked #2 and #3 in the medal count). Critics said it was largely due to a nationwide Soviet-style program to identify and domesticate an army of disabled athletes ready to win the crude metals for the glory of their motherland.

China thriving cities offer little comfort as their infrastructure, the transportation system, and all governmental institutions, including schools and universities, lack meaningful support for people with disabilities –so they stay at home; or go performing, or begging in the streets (many refer to themselves as ‘self-employed).

Some clever entrepreneurs have already tapped into the artistic talent pool of this largely underestimated minority group. They have initiated prestigious dance shows like ‘China Disabled People’s Performing Art Troupe‘ or (controversial) tourist attractions like ‘The Kingdom of the Little People‘. 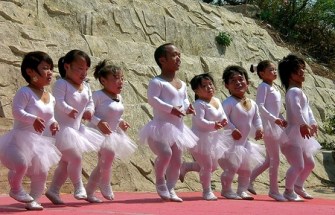 Yet, at the same time, reports are surfacing in the media that some “ruthless recruiters often prey on the mentally disabled” as a form of modern slavery. All these examples above have in common that people with disabilities are separated from the rest of society, not integrated.

City-life is already an improvement to the horrors that awaits the disabled in the countryside, explains Palmer, where Buddhist suspicion and glaring Confucian prejudices against the canji ren (lit: the deformed) crushes down on their families who gave birth to imperfect offspring. In Buddhism this often translates into bad karma or sins in one’s previous life.

“Children who are severely disabled are often kept in their homes for reasons of protecting their families “face.” –Tom, a blogger

READ MORE The Plight of the Mentally Disabled in China

James Palmer sees hope in the charity work of the Christian community in China (both foreign, but even more so, local Christians) and – surprisingly – Taoism. Taoism, Palmer argues, has always taken the world as it is and embraces diversity in the form of its many not so perfect deities and heroes all coming with a sense and purpose into this world. But the real heroes, he admits, are the brave individuals who form interest groups and fight for better treatment, more rights, and access to better medicine and education.

Your author always knew that something was strangely wrong with Beijing’s metro system the moment he set foot in it. After a while it became strikingly obvious: there are no elevators whatsoever. But then, I never saw a wheelchair (or baby-cars, for that matter) either, so maybe that’s why at first I thought nothing of it.

As to universities, if the disabled were willfully excluded from higher education, we had no way of knowing for sure because we didn’t meet any to discuss their struggle. Of course, before 2004, there were the crippled beggars around Shanghai’s People’s Square, Nanjing Road, and the French Concession in Xu Jiahui. I remember that once a Chinese student told me not to give them any money, because they were all “agents of the hidden beggar king.” There were rumors that many beggars mutilated themselves, cutting off flesh here and there, or a leg or arm, so that they could beg for even more money. 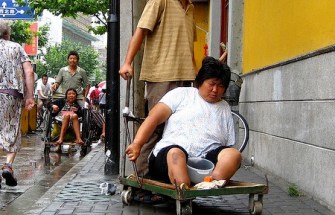 As Palmer noticed, in this competitive society, employers are highly trepidatious about hiring ugly, retarded or deformed people. They are bad for business, the bosses say. Yes, there are quota-laws in place, but many local employees, highly aware of Chinese superstitions and customs, are happy to pay the fines, Palmer says. It’s better than inviting bad fortune into the house.

“Such feelings are not unique to China. Every society has long-standing prejudices against the disabled. Until the rise of sentimentality in the 19th century, mocking imitation of the elderly, the lame, the blind or the mad was common practice in Europe.” –James Palmer 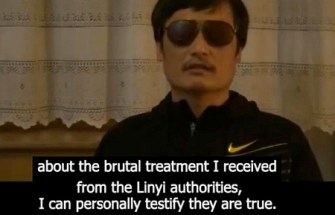 This all said, it seems a bit unfair, and your author always feels like this, to measure China against the living standard and level of charity in developed countries. China has still over 150 million citizens living in absolute poverty. And those 200 million migrant workers, often admired by Western economist as the sure sign of China’s economic progress, are so grossly underpaid, maltreated and exploited, that demanding nationwide access, say, to guide dogs for the blind may seem a bit pathetic compared to other human rights problems of China’s authoritarian leaders. But it matters dearly to those in need. 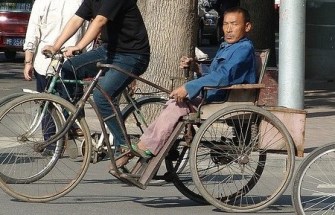 To be true, the entire Beijing subway system, a milestone for the Chinese civilization, was purposefully designed NOT to be nice to the handicapped. It literally appears as if some party official at some point had decided that Beijing didn’t want the crippled and impeded to access the metro –they can drive by bus and car, no?

A recent advance in 3D imaging techniques helped spark the biggest ever discovery of North American cave art.
Starts With A Bang

Time isn’t the same for everyone, even on Earth. Flying around the world gave Einstein the ultimate test. No one is immune from relativity.
Up Next
Technology & Innovation

Bitcoin ATMs Coming to the US This Month

Austin and Seattle, echelons of early adopters and “Keep My City Weird” bumper stickers, will be the first cities in the US to receive Bitcoin ATMs. After a successful pilot […]