Xue Yifan And Her Cool Graduation ‘Group-Photo’ Inspire A Nation

Except if you have the coolest graduation ‘group photo’ in the entire country in 2014: Ms Xue Yifan (薛逸凡) is THE ONLY GRADUATE IN PALEONTOLOGY major of Peking University (PKU), the China Daily reports, largely because few parents and students lack understanding what the subject is all about: 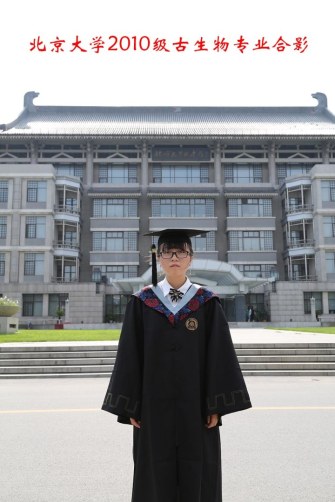 RELATED How A Single Picture Can Make You Famous In China

When Yifan posted her somber official 2014 graduation “group photo” (in front of the iconic PKU main library), little could she know that the shot would soon get viral. (China has over 500 million active internet users).

This wouldn’t be China if there wasn’t a Confucian twist to it. In this country, education is holy and often seen as the golden way to shine in an ocean of eager people, letting alone earning respect and saving face for oneself and one’s family. It also makes education supremely competitive, creates an over-supply of scholars, and drives down salaries. Once an occupational niche is discovered, within a single year competitors are drawn to it.

It is Good To Be The Only One

In an interview with the People’s Daily, a humble and modest Xue Yifan describes herself as ordinary but determined and motivated woman doted by the love of her parents. At the age of three, she recalls, she liked to draw a lot, and watched a lot of Wild Life documentaries on TV as well as popular cartoons such as Tom and Jerry or Journey to the West. Her parents were always supportive of her educational goals: “As long as you do what you love, everything will turn out just fine,” they said.

But being the only one isn’t always easy, the scholar recounts her experiences at one of China’s most elite universities: “It also generates a lot of stress and loneliness.”

The Dean of PKU’s Yuanpei College explained that despite the popularity of science majors in China and the allure of “mammoths and dinosaurs” stuff, letting alone evolutionary history, most Chinese students (including their parents, who often push their careers) “have limited understanding of the major.”

This may now have changed, partly because of brave Ms Xue Yifan.

READ MORE In China, paleontology is going the way of the dinosaur (by Lily Kuo)

To keep up to date with Dragons and Pandas you can follow me on Twitter: @worldethics; my website: East-West-Dichotomy.com; or my other blog: You’ve Heard About It.

Is There Room for Conservative Sexual Values?

If your grandfather published a book about his dating habits, it might read something like Mansfield’s prose. Reading the conservative professor is like listening to a juke box and sipping on malted milk.