A November Pew survey reveals a slight upward shift in public belief in climate change. A number of factors likely account for the rise in belief but the most parsimonious explanation remains a recovering economy, marked by hopeful signs of a U.S. unemployment rate below 9% for the first time since 2009.

[* New job figures are complex, see NPR discussion, but likely a lagging indicator for public of improving economy with the public receiving over the past few months a variety of signals via media and direct experience. As the WPost reports: “…the survey of U.S. households, on which the unemployment rate is based, has now shown strong job growth for four straight months — 321,000 jobs a month, on average, since August. That hints that there may be some momentum in the economy that is not being captured by surveys of employers, perhaps as a result of rising self-employment or company start-ups.”]

According to the Pew survey, most of the shift in public opinion occurs among politically moderate Republicans and Independents.  Typically across issues these are the segments most likely to shift their opinions in relation to changing events and trends, such as signs of a recovering economy. As Pew reports, little change has occurred in the outlook among conservative Republicans.

Of note, over the next year relative to the performance of the economy and other factors, it will be important to compare this possible emerging upward belief trend identified by Pew across other surveys that use slightly different question wording.  For more see this 2007 study I published at Public Opinion Quarterly, an analysis which I am currently updating by similarly comparing the past 5 years of combined survey trends. Of course, if the economy worsens — a serious threat given Eurozone woes– I would not expect the possible upward trend in belief to continue.

Below is how I described the likely strong relationship between economic performance and climate change opinion in the April 2011 Climate Shift report (see report for citations). Also see this Q&A discussion I did with Climate Central and a recent book chapter I contributed to the Oxford Handbook of Climate Change & Society.

Important to note here is that past analyses –and what we can discern from emerging trends– only allows for establishing a correlation among trends, though as I explain below, there is a well-established psychological mechanism suggesting a causal relationship.  Moreover, the performance of the economy and this psychological mechanism will interact with the level of media attention both to the economy and to climate change and how climate change is framed, especially if action is framed as damaging to a deeply struggling economy.

Social psychologists describe the public as having a “finite pool of worry.”  As one perceived risk gains attention, other risks often are bumped from concern. Perhaps no other issue has the ability to swamp public attention to a greater extent than the economy and unemployment.  Unlike the diffuse, creeping nature of climate change, the economy and unemployment for many Americans provide daily and powerful reminders of their vulnerability.

Consider the inverse relationship between concern for jobs and concern for the environment.  As Figure 4.1 displays, in 2007, unemployment stood at its lowest level since the Clinton-era boom years.  That year, an equal 57 percent of Americans named both jobs and the environment as top policy priorities.  Yet by 2009, unemployment had jumped to 9.3 percent.  When Obama took office, 83 percent named jobs a top priority, compared with 41 percent who defined the environment in similar terms and 30 percent who said global warming was a leading concern.  A similar downturn occurred between 2002 and 2003, as the economy struggled after the September 11 terrorist attacks.  The threat of terrorism along with war also likely taxed the ability of the public to turn its concern to the environment.  Gallup data reflects an identical inverse relationship between public worry over climate change and the unemployment rate over the same time period, 1997 to 2011.

In a 2010 study, economists Matthew Kahn and Matthew Kotchen investigated directly the linkages between the economic recession that hit the United States in 2007 and the subsequent downturn in climate change concern. Analyzing Google search trends, they discovered that in states with higher unemployment rates, given a limited pool of worry, individuals were much less likely to search for information about global warming.

Turning to national survey data, after controlling for demographics, they found that individuals living in states with higher unemployment rates were appreciably less concerned and more dismissive of climate change. Lastly, they examined polling data from California, analyzing the relationship between a survey respondent’s attitudes and the unemployment rate in their surrounding county.  After controlling for demographics, Kahn and Kotchen’s analysis showed that even in pro-environment California, a significant increase in the local unemployment rate could decrease the perceived priority of the environment by as much as 50 percent.

Reflecting on their three analyses, the economists concluded “the general pattern is clear: higher unemployment rates—at least when levels reach those observed during the recent recession—erode public concern about the environment.”  Conversely, they observed, elevated concern only is likely to occur during periods of relative economic boom. In sum then, the elevated public concern over climate change that occurred in 2006 and 2007 corresponded to a decade low in unemployment.

In recent years as unemployment has risen sharply, the perceived priority of the issue has dropped. Beyond this trend data, the study by Kahn and Kotchen demonstrates the strong linkages between individual perceptions of climate change and state and local unemployment. The Congressional Budget Office projects unemployment rates will not return to the 2006 and 2007 lows until 2015, suggesting that an upward shift in public concern with climate change may be unlikely over the next half-decade. 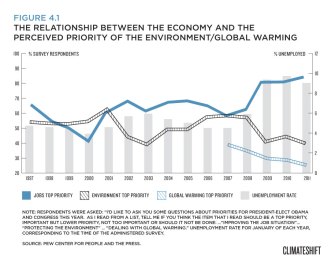 Historian Niall Ferguson responds to a recent study suggesting that the US is on the verge of a manufacturing renaissance. He believes that major legal and economic reforms would have to take place first.