Should you or shouldn’t you bring that chocolate bar to your next exam? Scientific studies have been inconclusive when it comes to the cognitive effects of sugar. Some suggest that sugar has positive effects on brain function while others disagree. Very few, however, have compared the effects of different types of sugar.

A new study from New Zealand published in the journal Physiology and Behaviour set out to do just that. It tested the cognitive effects of different sugars – glucose, fructose and sucrose – to see if they affected information processing, executive functioning and attention differently.

Sucrose, or table sugar, is broken down in the body to glucose and fructose which are metabolized quite differently. Fructose is metabolized much more slowly and is almost entirely absorbed by the liver, while glucose is metabolized widely in the body and distributed (with the help of insulin) to the muscles, kidneys, adipose tissue and brain. Notably, the brain can only use two substrates for energy – glucose and ketones (which is why ketogenic diets are touted for their cognitive benefits).

Previous studies have shown that glucose is important for maintaining self-control. Acts of self-control have shown to deplete relatively large amounts of glucose and only after restoring glucose levels does self-regulation improve. This could be why people who quit smoking, which requires great reserves of self-control, may feel the need to consume more sweets. Glucose ingestion has also been found to have a positive effect on some types of memory tasks.

The newly published study is one of the few to compare the effects of glucose, fructose, sucrose and a placebo (in the form of the artificial sweetener sucralose). In the study, 49 subjects consumed beverages containing the different types of sugars and 20 minutes later performed several cognitive tests. In addition, the researchers divided the subjects into a fasting and non-fasting group to see whether the effects of the sugars changed depending on the fasted state of the subjects.

The results showed that glucose and sucrose had relatively negative effects on the assessed cognitive tasks. The tasks measured response time, arithmetic processing and attention. In contrast, no apparent effect on task performances was found with fructose ingestion compared to the placebo. The study also found that the effects were more pronounced in the fasting group compared to the non-fasting group. 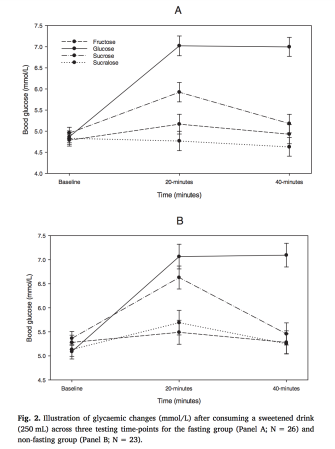 Study author Mei Peng, a lecturer in sensory science at the University of Otago told PsyPost:

“Our study suggests that the ‘sugar coma’ – with regards to glucose – is indeed a real phenomenon, where levels of attention seem to decline after consumption of glucose-containing sugar. While the sample size is relatively small, the effect we observe is substantial.”

Peng concludes that further research is needed to quantify how different brain regions change after sugar consumption. This will help us better understand how attention deficits arise and will help us improve our eating behaviors.

Related
Neuropsych
Daily caffeine intake temporarily alters your brain structure
Compared to people who took a placebo, the brains of those who took caffeine pills had a temporarily smaller gray matter volume.
Thinking
Why you should laugh at yourself, according to Seneca and Nietzsche
“It is more human to laugh at life than to lament it.”
Hard Science
The violence of the Tonga eruption is a wake-up call to watch other submarine volcanoes
Out of sight, but not out of mind.
The Present
How circular economics can make us happier and less stressed
Entrenched business wisdom says that community-led economic systems are pure fantasy. Douglas Rushkoff disagrees.
The Learning Curve
The art of asking the right questions
The right questions are those sparked from the joy of discovery.
Up Next
Culture & Religion
Why the era of social media is coming to an end
Studies and Facebook creators are seeing social media in a much more negative light.