The Power of Negative Gossip: Coloring How We See the World, One Rumor at a Time 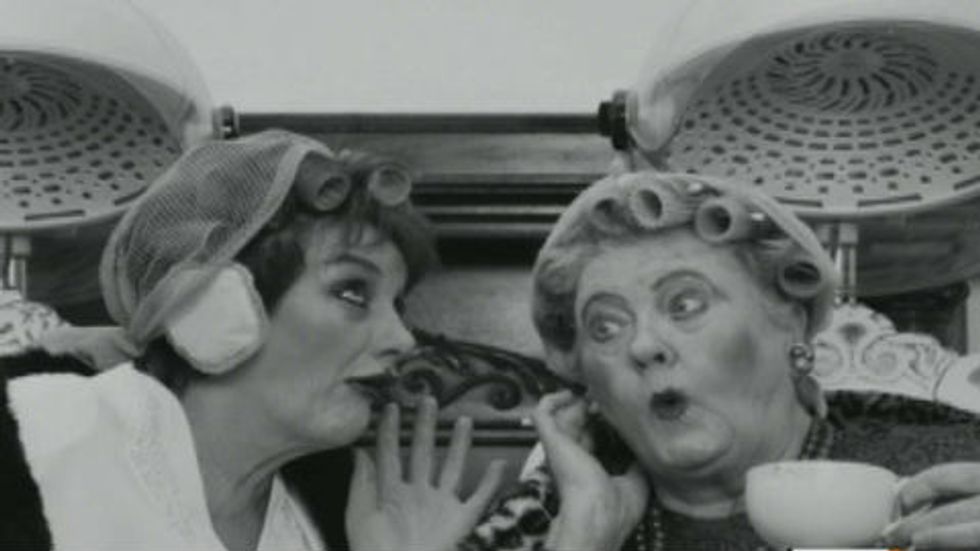 Gossip: you can’t avoid it. And maybe, you shouldn’t want to. Scientists have argued that gossip is an important tool for social cohesion and information transmission, allowing us to function more effectively in an ever-larger society. Moreover, it’s an important tool for affective learning: it can give us a sense of who would make a good ally—or who we should avoid—even in the absence of direct contact. But can gossip influence our minds on a more profound level? Recent findings presented in this month’s Science suggest that yes, it can. Gossip, it turns out, can influence something as fundamental as visual processing – especially if that gossip is negative.

How gossip affects our actual perception of the world

In the study, researchers used a typical paradigm used to study visual processing, binocular rivalry. Binocular rivalry results from two different images (for instance, a tree and a cat) being presented to each eye. The images then compete for dominance, and we end up consciously seeing only one of the two images (for instance, the cat), while the other image is suppressed. But after a few seconds, the images flip: now, we see the tree, and the cat disappears. The process repeats, and we see a series of alternative pictures: cat, tree, cat, tree, etc. However, the two images are not necessarily given equal playing time. One might actually dominate and be visible for a much longer period of time than the other. Often, this happens because of simple physical characteristics of the image (i.e, luminance, contrast), or because of its content (for instance, emotional images tend to dominate over non-emotional ones).

In this case, subjects saw neutral faces, with exactly the same visual properties. These faces were paired with a house. In theory, neither image should have been dominant, and none of the faces should have stood out from one another. However, there was a crucial prior step. Each face had first been associated with a piece of gossip – either positive, negative, or neutral.

What happened? Faces that had been paired with negative gossip dominated far longer than any other stimulus. This was not true of either positive or neutral gossip. Hearing something negative about a person, then, can actually influence our basic visual processing, causing us to choose to focus on that person over other possible people (and objects).

The consequences of focusing on the negative

So, gossip—especially of the nasty kind—not only influences our perceptions in a more abstract sense (Who do we like? Who don’t we like? Who matters?), but also in a very literal sense, physically changing the way we see the world.

Is this a good thing? Some might argue that yes, it is. It could help protect us from people who do bad things: we focus on them for longer, learn more about them and their behaviors, and in so doing, are better able to deal with the consequences and identify similar bad events, like lying or stealing or cheating, in the future.

However, what about false gossip, or the malicious spread of rumors – something that has become increasingly widespread in the world of social media? Or even a simple mistake resulting from misinformation? We’d be more likely to hone in on that, too. And what we’d learn in that case would not necessarily be true or even helpful. And consider the person in question: the extra scrutiny that comes from our biological, physical focus on him because of the negative gossip comes at a high price to reputation – and one that can’t be undone by a simple addition of positive information, since, as the research has shown, positive information does not carry the same privileged weight. That makes remedying a mistake (or a malicious stab) all the more difficult.

That last point holds even for true negative gossip. We might be able to correct something we did, or make up for it in some way, but the negative event will haunt us for far longer and will remain much more salient – something that’s especially true as our mistakes follow us in perpetuity in cyberspace.

And here’s the kicker: when we focus in on someone because of some negative gossip, whether it’s by actually looking at him longer in person, or choosing to read more about him online, we might not actually realize we’re doing it. That’s the power of simple visual processing. Something to remember the next time we do something gossip-worthy ourselves – or find ourselves drawn to some negative gossip on others.