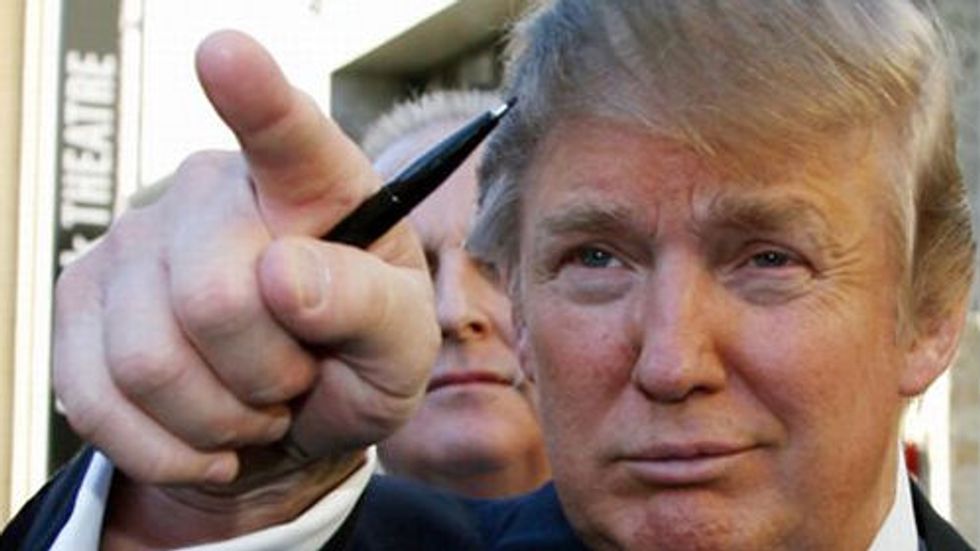 Donald Trump was born in 1946. 34 years later, in the third edition of the Diagnostic and Statistical Manual of Mental Disorders (DSM), the American Psychiatric Association’s hefty volume of mental disorder classifications, the term “Narcissistic Personality Disorder” (NPD) first appeared as a diagnosable disease – Trump would doubtless say it was created in his honor (characteristic #1 of NPD: An exaggerated sense of self-importance). After all, the newly-minted personality disorder made its debut only nine years after he took the helm of his father’s company… and renamed it from Elizabeth Trump & Son to The Trump Organization.

The most recent DSM, DSM-IV, is currently under extensive revision, with DSM-V scheduled for publication sometime in 2013, and both its listed diseases and their definitions are undergoing extensive scrutiny and contentious debate. On the chopping block are five of the ten or so so-called personality disorders, including NPD. Among the reasons for the cut are the frequent overlap between disorders, the general lack of stability of symptoms, and the range of those symptoms in reality, as compared to the either/or approach of the manual (either you have a disorder or you don’t). So, before NPD becomes a thing of the past, at least in its current form, I thought we’d take a moment to reflect on some less than artful choices – or the things that make Trump look like he just stepped out of the fourth edition, symptom by symptom.

A caveat: I am obviously exaggerating, both Trump and narcissism. But debate on personality disorders, classifications, diagnoses, and treatments is well worthwhile, and a colorful spokesperson never hurts.

So, without further ado, Trump’s quotable illustration of the hallmarks of NPD, defined according to DSM-IV as, “A pervasive pattern of grandiosity (in fantasy or behavior), need for admiration, and lack of empathy.” The disorder is indicated by at least five of the following:

1.     An exaggerated sense of self-importance (e.g., exaggerates achievements and talents, expects to be recognized as superior without commensurate achievements)

A sense of one’s own importance, a grandiose feeling that one is alone responsible for any achievement is a hallmark of the narcissist. Grandiosity is one of the central tenets of a narcissistic personality. Narcissists tend to take credit for everything, as if no one else contributed to the end product. Witness Trump’s declaration that, “When people see the beautiful marble in Trump Tower, they usually have no idea what I went through personally to achieve the end result. No one cares about the blood, sweat, and tears that art or beauty require.” What do you know: not only is Trump a developer and an artistic visionary, but he seems to be a stellar architect and construction worker as well.

And history will agree (naturally). “Anyone who thinks my story is anywhere near over is sadly mistaken,” says Trump. Sadly, indeed.

How many presidential runs does it take for the process to be defined as a preoccupation rather than an occupation?

I’d leave it at that, except for the existence of this little gem: “My fingers are long and beautiful, as, it has been well documented, are various other parts of my body.” Not only all-powerful, but all-beautiful, too. The man has it all.

3.     Believes he is “special” and can only be understood by, or should associate with, other special or high-status people (or institutions)

To narcissists, the “little people” or anyone beneath them (which is mostly everyone) don’t matter. Trump’s lambasting of Rosie O’Donnell is a good case in point: “Rosie O’Donnell called me a snake oil salesman. And, you know, coming from Rosie, that’s pretty low because when you look at her and when you see the mind, the mind is weak. I don’t see it. I don’t get it. I never understood – how does she even get on television?”

Clearly, Rosie lacks the power to understand the dazzling intellect that is Donald Trump. Trump needs someone of equal status to appreciate his immensity. But it can’t be Larry King, because as he told King, “Do you mind if I sit back a little? Because your breath is very bad. It really is. Has this been told to you before?”

No matter the sincerity, as long as the praise comes frequently and at a high enough volume. Says Trump, “All of the women on The Apprentice flirted with me – consciously or unconsciously. That’s to be expected.” Clearly. Admired, wherever he may go, even when he’s talking about himself in the third person, as in, “Love him or hate him, Trump is a man who is certain about what he wants and sets out to get it, no holds barred. Women find his power almost as much of a turn-on as his money.”

As he puts it, “Nobody but a total masochist wants to be criticized.”

The world owes the narcissist everything; he, in turn, owes it nothing.

I think Trump’s attitude can be summed up with this approach to marriage: “I wish I’d had a great marriage. See, my father was always very proud of me, but the one thing he got right was that he had a great marriage. He was married for 64 years. One of my ex-wives once said to me, ‘You have to work at a marriage.’ And I said, ‘That’s the most ridiculous thing.’”

6.     Selfishly takes advantage of others to achieve his own ends

I don’t have a quote for this one, but perhaps we can talk to one of his ex-wives.

Narcissists don’t sympathize with the feelings of others. Who are these “others,” anyway? No one matters except for me.

I won’t recreate the Rosie rampage in full, but sentiments like, “I’ll sue her because it would be fun. I’d like to take some money out of her fat ass pockets,” capture the spirit.

8.     Is often envious of others or believes others to be envious of him

Here, it seems like Trump is dominated by the second sentiment, the expectation that everyone is envious of his success. Everyone wants to be Trump. As he puts it, “The old rich may look down their noses at me, but I think they kiss my ass.”

Again, other people don’t matter. They can be treated like nothing, because who are we kidding – nothing is the closest description of what they are.

Clients don’t matter. As Trump puts it, “When I build something for somebody, I always add $50 million or $60 million onto the price. My guys come in, they say it's going to cost $75 million. I say it's going to cost $125 million, and I build it for $100 million. Basically, I did a lousy job. But they think I did a great job.” Take them for the suckers they are; that’s the ticket.

Other businesses don’t matter. As Trump says, “If you want to buy something, it’s obviously in your best interest to convince the seller that what he’s got isn’t worth very much.”

Too bad. We need a good candidate. Because according to Trump, “One of the key problems today is that politics is such a disgrace. Good people don’t go into government.”