The 43 Things 'Prometheus' Taught Me (About The Future & Science) 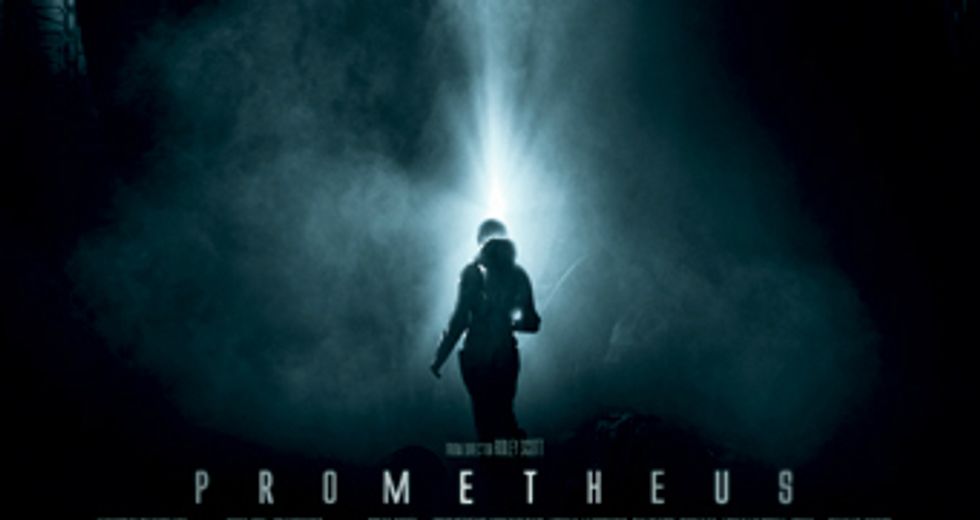 Films, books, comics and so on are important topics to look at critically. You use the evidence presented in the medium to see whether the action depicted stands up against the light the plot provides: if it does not, it's inconsistent and probably bad. You, as an audience member, will probably be insulted if, say, a film treats characters as strong, then weak, red-haired then black-haired and so on, for no discernible reason. One just needs to consider the mess of Southland Tales to realize this.

I just recently saw the film 'Prometheus'. I loved this film: visually stunning, some great performances, and plenty of openness about tackling major themes of creation and meaning. However, despite my love of this movie, there are still some elements that I found wanting. Specifically with the story and writing.

'Prometheus'... "taught" me a number of things that the creators, particularly Ridley Scott and Damon Lindelhof, think the future will bring. I'm glad they've provided me with an education.

Here's a list of 43 things that I am now aware of (apologies for the weird spacing and font-size. I'm not sure what's happened.)

1. English girls grow up to be Swedish women.

2. Little hammers can excavate entire caves; it's possible to date cave-paintings from a casual glance.3. When going on 4-year space missions, it's silly to ask what the mission is.

4. Having exactly the same genetics means we can still look completely different; also, chimpanzees are an anomaly. And who said anything about dinosaurs?

5. After billions of years, there's no point evolving or having an anatomy change. And yes, this is despite the fact that your species is shown creating life, possibly on Earth, which, according to 'science' started billions of years ago.

6. Speaking of science, we learn biologists, when confronted with the corpse of an alien, run away.

7. Aborting aliens is an everyday occurrence that is not worth mentioning to fellow crew members, none of whom have really done anything but follow your commands.

8. After having your stomach ripped open and an alien ripped out, you can still walk, scream and run away.

9. Black goo can turn you into one of the infected from '28 Days Later' or give you eye fish. Whatever.

10. It's possible to leave an alien planet on an alien ship to find the original aliens, with nothing but a vaguely headless android and a sense of revenge. Food and water are not necessary.

11. People in impressive recorded videos, from four years before, know the positions, even seating-wise, of the audience members in the present.

12.When casting for old men, it's better to take a good-looking middle-aged actor and let a retarded bonobo loose in the make-up room with the actor tied to a chair.

13. Sex between two extremely beautiful specimens of humanity is not worth showing, even vaguely, in a movie focused on beautiful visuals.

15. Geologists who map complex cave-systems using fancy round robots, who are in constant contact with the ship, who have a live-feed hologram of the entire cave, can still get lost.

16. When making the greatest scientific discovery in the history of our species, it's not important to be in awe, celebrate, or show normal human emotion that would convey how enormous it is.

16. Sprouting nonsense statements like "I choose to believe" is something a scientist from the future will say because we all know science is based solely on personal choice.

17. After one day of investigating an alien building, because there was no friendly alien there, ready to tell you all its secrets, it is necessary to turn to alcohol.

18. Androids will kill humans to test a vague scientific theory.

19. It's not necessary to tell anyone you're pregnant with an alien baby creature monster. Indeed, it's necessary to treat everyone as if they're trying to harm you, despite them having given you no reason to think that and despite the possibility that they would probably want to help you.

20. Biologists will stick their hands into cobra-snake-penis monster aliens but run away from long-dead headless alien corpses.

21. It's ok to take your helmet off, despite the fact that oxygen is only one aspect of what makes breathable air and doesn't mean there aren't alien bacteria and spores that could probably kill you (since we have no defenses having never been to this place before).

22. It is necessary to allow your android to press as many buttons as possible on an alien artifact.

23. It is completely fine to walk into a foreign, alien place without armed protection because … science.

24. You shouldn't take it personally or even care when the person funding your missions says he's dead but then isn't. And then he really is.

25. People have different surnames to their daughters, despite the daughter conveying every reason to think she's not married (get billions of light-years away from Earth, sleep with good-looking men because they ask if you're a robot).

26. Science has decided there isn't that much difference between billions and millions of miles because... lightyears.

27. Running in a straight line is the only strategy from a donut-shaped ship that is collapsing perfectly on its side.

28. It is necessary to assert yourself as "in charge" of this ship and dictate what scientists may and may not do, despite them thinking otherwise, and then never leave the ship.

29. You can burn a person's lover and she won't yell at you or show that much contempt for you.

30. Fire destroys everything, including alien bacteria and diseases.

32. When you see weird hologram recordings of the Engineers, you don't need to question too deeply what they're running from (can't be the black goo, since they run into the room with it).

33. You don't need to wonder why the Engineers were leaving star maps to a weapons testing facility.

34. Learning human languages means you can read and speak alien languages perfectly, enough to make a big green-grey guy stroke your hair (before ripping your head off).

35. It's OK to destroy all life as long as you created it. It's not important to wonder why they want to kill all of us and want to do so, in such an ineffective manner.

36. You can persuade a pilot you've spoken to a few times to commit suicide because he's a "soldier".

37. Also, it's not necessary to inform him there might be other ships that the Engineer pilot can use anyway (to be fair, I don't think she knew, but that's still her ignorance that David quickly overcame).

38. If a pathetic, tiny pink creature who is sweaty and yells at you (i.e. a human female) tries to kill you, it's more important to kill her than simply leave in the hundreds of other ships on the planet. This is despite the fact that you could probably have gotten onto one of these ships and used a big gun on her tiny ship, which you could identify because you have eyes.

39. Despite the 'Alien' franchise indicating aliens start off as small as puppies, then grow, it's OK to show the 'first' alien as almost adult size despite the Engineer not being that much bigger than us and matching us 100% genetically.

40. It's not necessary to go back to Earth to warn your species about a possible threat and the findings of your mission; instead you should try find that threat yourself with all the power of your… revenge and a half-broken android, to "get answers", because your previous encounters with this species indicates they're willingness to do so.

41. You can't immediately go back to Earth, to stock up, supply, get an army, and then find these giant, powerful and smarter beings because… you'll waste time. They only haven't bothered humans for billions and billions of years but you never know! No time for restocking.

42. How does Weyland know the Engineers would have the secret to immortality? (Real Answer: The fact that they haven't evolved over billions of years might be an indication. But Weyland doesn't know that they looked the same billions years ago. Only we do.)

43. Why does Weyland think they will tell him the secret, assuming they have it?

I also highly recommend this video by the wonderful guys at Red Letter Media which raises many similar questions (promise I only saw it after my own list), but done in a much more humorous way. Please do add your own and also let me know if you can think of an explanation for some of these. Some have already tried (and seem reasonable).

UPDATE: I hadn't seen it before writing, but the best (film) critic, Film Crit Hulk has just recently published his review. As always, he is a must-read for brilliant insight, remarkable arguments and lessons in creating beautiful and fulfilling works.