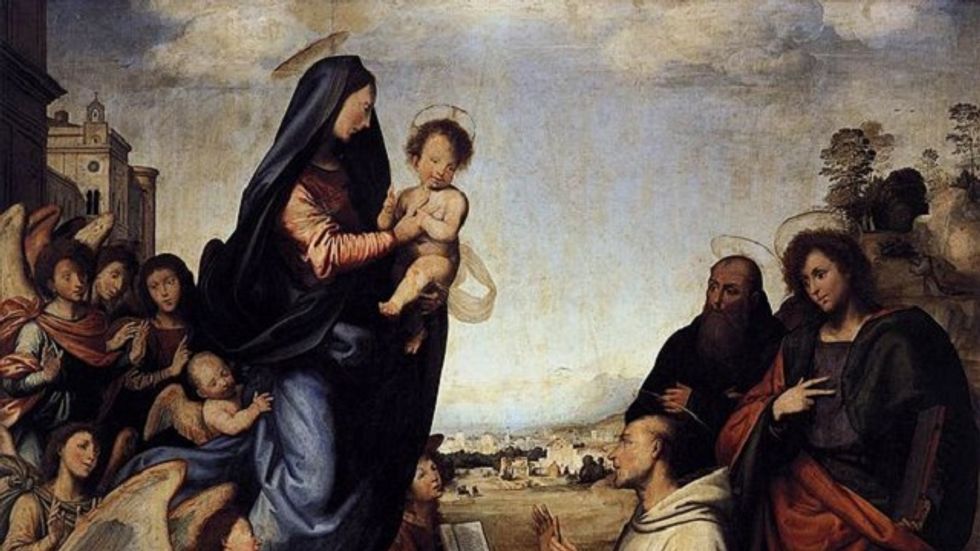 It’s commonplace to imagine the people of the period we know now as the High Renaissance, centered in Italy from the 1490s to the 1520s, looking at the works of Leonardo, Michelangelo, and Raphael and thinking, “What a lovely Renaissance we’re having…” But, as Alexander Nagel explains in The Controversy of Renaissance Art, not everyone bought into the ideals of the Renaissance at that moment. In fact, Nagel sees the High Renaissance as an art historical and cultural turning point so steeped in controversy that controversy becomes “a condition of the art.” Instead of a fossilized, static time of great figures admiring one another’s greatness, the Renaissance in Nagel’s argument reemerges as a tumultuous time of experimentation and searching that is fluid, unresolved, and intellectually and spiritually challenging. Although, as Nagel admits, the Renaissance no longer stands triumphantly at the center of art history as an academic discipline, The Controversy of Renaissance Art might just return it there, not in triumph, but in the timelessness of its human uncertainty.

Nagel, professor of Renaissance art history at the Institute of Fine Arts at New York University, sees the High Renaissance sitting between the calm of the 1400s and the church-imposed “calm” of the post-Reformation second half of the 1500s. Between those two very states of calm, the artists of the High Renaissance embraced a sense of “againstness,” Nagel suggests, in which they reexamined the very idea of religious art and reinvented it in the light of neoclassical humanism and other intellectual movements of the time. The power of the art lies not in the answers it might find but in the restless energy of the search for those answers.

This search for what religious art should or could be begins for Nagel with the debate over the proper function of imagery. He begins by quoting the charismatic and doomed Dominican preacher Savonarola, who denounced the introduction of recognizable portraits in religious art as a distraction from the message of the image—a tension between the making of beautiful pictures and the making of pious pictures, with artists as prominent as Botticelli ranking among the worst offenders. A turn towards modernity and increased realism just made things worse. “Religious art everywhere had started to depict recognizable people in contemporary clothing and settings,” Nagel writes, “provoking the clerics to charge that it wasn’t religious art at all—that it was simply pictorial curiosity or, worse, a form of masquerade, where figures of saints became pretexts or disguises for secular portraits.” When the Virgin Mary began to look too much like the prettiest girl in town, the boundaries of religious art were strained, if not erased. Throughout The Controversy of Renaissance Art Nagel continually connects ideas and images to express how the two collided during this period.

“The rise of painting in this period was a highly improbable, surprise victory,” Nagel explains after showing how sculpture had previously held the top spot of religious art. Thanks to new ideas of perspective, painting learned to mimic sculpture’s illusionary qualities. In turn, sculpture struck back with a new emphasis on antique statuary. “If actual ancient statues came down through history in pieces,” Nagel believes, “the Western pictorial imagination had preserved an image of ancient statuary in its original wholeness and functional context.” Statues symbolized permanence and preeminence—the stuff of rulers. Religious art crowned Christ as the King of Kings through statuary that, in some cases, literally toppled the old statues from their pedestals. When some critics saw putting the humble Suffering Servant on a pedestal as a contradiction, the crucifix emerged as an “anti-statue.” The tossing and turning of ideas in these works and artists can be dizzying, but Nagel always manages to maintain order in the chaos of controversy.

Just when the images begin to swim in your head (and when you understand how they must have swirled in the heads of those living in that time), Nagel examines the “soft iconoclasm” some artists offered as the latest solution to the controversy. Launching from a high altar in Vicenza festooned with precious stones that he calls “the most abstract altarpiece of the Italian Renaissance,” Nagel rockets through this school of near abstraction that resists the zero tolerance of “hard” iconoclasm as well as the wild abandon of previous religious imagery. Variations on the tabernacle, the vessel in which the Eucharist is stored, mark a “Christocentric reorientation,” Nagel shows, after all the experimentation with saints and Virgins that had gone before.

One of the great pleasures of Nagel’s narration is his ability to pull the perfect illustration to give form to his argument, quite often from the works of artists barely known by most people, if at all. The big three of Leonardo, Michelangelo, and Raphael find their way into the discussion, but seeing the role that a second teamer such as Fra Bartolomeo with his The Vision of St. Bernard (shown above) played in the discussion, even influencing Raphael and Michelangelo, helps broaden the scope of the discussion of the Renaissance beyond the usual “greatest hits” format. I’d never heard of Andrea Riccio before, but after reading how his statue of Moses bearing rams’ horns alluded to both the Greek god Zeus and the Egyptian god Ammon, thus setting off a three-fold theological thunderstorm, I wanted to learn more, and wondered how many other controversial artists wait silently to be rediscovered.

Alexander Nagel’s The Controversy of Renaissance Art does what every great art history book aims to do—make you see the overly familiar in an unfamiliar way. Fusing religious and intellectual history with art history, Nagel comes up with a visually and verbally complex but compelling tale with no final answers but scores of fascinating questions. In our own time of unresolved religious controversy and conflict, some might turn to the art of the Renaissance for some kind of definitive answer. As The Controversy of Renaissance Art proves, the only “answer” the Renaissance can offer is the consolation that we have always had unresolved questions and, perhaps, always will. The beauty of faith and art is not in the finding, but in the seeking.

[Many thanks to the University of Chicago Press for providing me with a review copy of Alexander Nagel’s The Controversy of Renaissance Art.]