Superman and the Case of the Wronged Artists 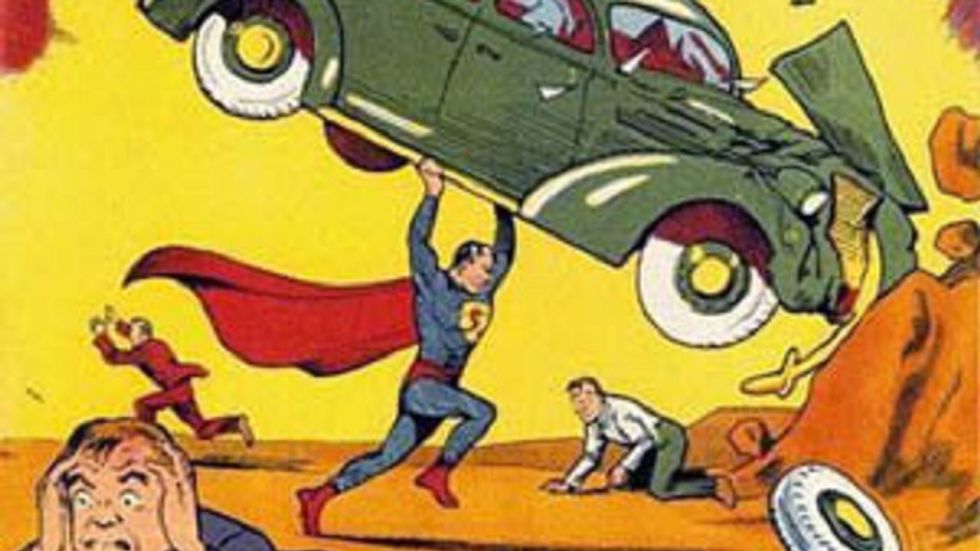 When Man of Steel opened in theaters on June 14, 2013, it pulled in $116.6 million USD that opening weekend alone. Superman remains a box office bonanza in his eighth decade of existence, continuing the billion-dollar tradition sparked originally by Joe Shuster’s eye-catching cover for Action Comics #1 (detail shown above). Despite all that success, Superman’s creators—artist Shuster and author Jerry Siegel—saw precious little of it. Brad Ricca’s Super Boys: The Amazing Adventures of Jerry Siegel and Joe Shuster—The Creators of Superman tells the exciting story of two Jewish Cleveland teens finding one another and then creating one of the most iconic figures of American (and world) popular culture, but makes you feel the soul-crushing aftermath of two young men exploited by the comic publishing industry and then cast aside, ultimately dying in near poverty. Super Boys will thrill every fanboy with juicy details of how Superman became Superman, but it will also sadden and anger with the tragic details of corporations crushing creativity. If it were a comic book story, Siegel and Shuster might have called it “Superman and the Case of the Wronged Artists.”

One hundred and thirty dollars. That’s all the “Super Boys” received in exchange for the rights to Superman back in 1938. Brad Ricca’s website offers an interactive “check” asking you whether you’d sign if you were in their shoes. In hindsight, it seems obviously foolish, but back in 1938 nobody knew Superman or superheroes or a future filled with summer blockbusters and blockbuster sequels. With an offer from the comics company to work on their creation, Siegel and Shuster looked at the still-Depressed American economy around them and took the offer. As Ricca puts it plainly, “When the dust settled, Jerry and Joe weren’t so much blackmailed or bamboozled; they were bullied. The creators of Superman were bullied.” Sitting here in 2013, surrounded by another age of worker exploitation and corporate greed run amok, Siegel and Shuster’s plight seems far too familiar.

Ricca, a native Clevelander himself, however, manages to recall the electricity and raw energy of Siegel and Shuster’s origins. Both from Jewish families that fled Europe’s anti-Semitism, the two young men almost instantly recognized one another as soul mates—infatuated with movies, insatiable consumers of the new genre of science fiction, longing to impress girls. Ricca excels in recreating the environment in which these two young men moved and took pieces from in the creation of their most memorable (and, for them, heart-breaking) character. Shuster’s self-improvement through bodybuilding scheme provided a wide array of strongman poses he used for the Man of Steel. Siegel’s study of Edgar Rice Burroughs’s Tarzan and John Carter of Mars impressed upon him the power of the story of an “alien.” Shuster assembled his Superman from photos of Jesse Owens’ superhuman Olympic feats, movie Tarzan Johnny Weissmuller’s manly head, and the futuristic look of Flash Gordon and Buck Rogers. Siegel, in addition to putting much of his own nebbish, spectacled self into the Clark Kent alias, based Lois Lane on a real-life Lois he pined for from afar and even based the evil Lex Luther on Cleveland’s own Gilded Age political fixer/villain Mark Hanna. Ricca’s a great detective who gathers together all the usual and unusual subjects that make up the tangled web of artistic creation. (Ricca’s side sleuthing into the death of Siegel’s father also reveals new meanings behind the sons and fathers that pervade the Superman story.)

The fun, early days soon give way to the dark decades, especially after World War II, when DC Comics decided that Joe and, especially, Jerry were more trouble than they were worth. As Ricca points out, the duo often sneaked in snide comments about their situation. In just the sixth issue of Action Comics, Jerry and Joe have Superman confront a fraudulent “personal manager” making money off his name, mirroring the exploitation the artists were feeling at the time. Cast away from their creation, Siegel and Shuster scrambled for work. Siegel continued to write stories and even created a second lasting super figure in The Spectre, a supernatural Superman of sorts. Faced with failing eyesight and painful hand trouble, Shuster turned to the dark side of comics illustration and worked anonymously for “adult” comics such as Nights of Horror. Joe drew obvious copies of Superman/Clark Kent, Lois Lane, and even Jimmy Olsen in sadomasochistic poses for these magazines. “It may be unnerving for some to see Clark, Lois, and Jimmy involved in weird acts of bondage, but there is no mistaking the pedigree,” Ricca writes. “Joe might have looked at it as the ultimate revenge against National [holders of the Superman copyright]. Something made him put so much work into it.” It wasn’t until 2009 that comics historian Craig Yoe recognized the connection, hidden in plain sight just like Superman’s reporter alter ego.

Shuster’s naughty drawings eked out what little revenge he and Siegel could manage in their mostly one-sided legal war to recover the rights to Superman. When the TV series Adventures of Superman (starring George Reeves) came out in 1952, Jerry threatened to go on a hunger strike until getting a share, but the media largely ignored him. Joe resorted to selling furniture in the 1960s as his finances worsened. Jerry’s daughter remembers him sadly selling off the last of his Superman effects. Not until the mid-1970s, when the Christopher Reeve-starring film Superman began production, did Siegel and Shuster find any relief. Begun with Jerry’s press release placing a “curse” on the movie, efforts by comic artists Neal Adams and Carmine Infantino (and the pressure of so much negative press on the corporation) won Superman’s creators a modest settlement and the restoration of their names as the creators of Superman. Although the cheers of moviegoers upon seeing their names flash on the silver screen must have been heartening, it was a classic case of much too little, too late—Joe died in 1992, with Jerry following 4 years later.

“The story of the creation of Superman is about many things,” Ricca sums up. “[I]t is just as much about the beginnings of corporate America and its relationship to popular culture as it is about artistic creation and familial relationships. It is a story about the haves and the have-nots.” Super Boys: The Amazing Adventures of Jerry Siegel and Joe Shuster—The Creators of Superman, like the comic books of Siegel and Shuster’s day, gives you very clear-cut good and bad guys, but manages to still tell a complex story in a lively, personal way. Ricca’s personal ties to Cleveland and to the history of comics itself add a warmth and humor to his delivery that make this tragic tale more readable, despite even knowing how it ends. Just as Man of Steel presents a darker, more complex Superman to a mainstream audience, Super Boys presents a darker, more complex origin tale that reveals not the Kryptonian but his creators as darker, more complex, and ultimately more human than previously suspected.