Is Jackson Pollock the Most Famous American Artist We Know Nothing About?

Was Jackson Pollock more than just “Jack the Dripper”? 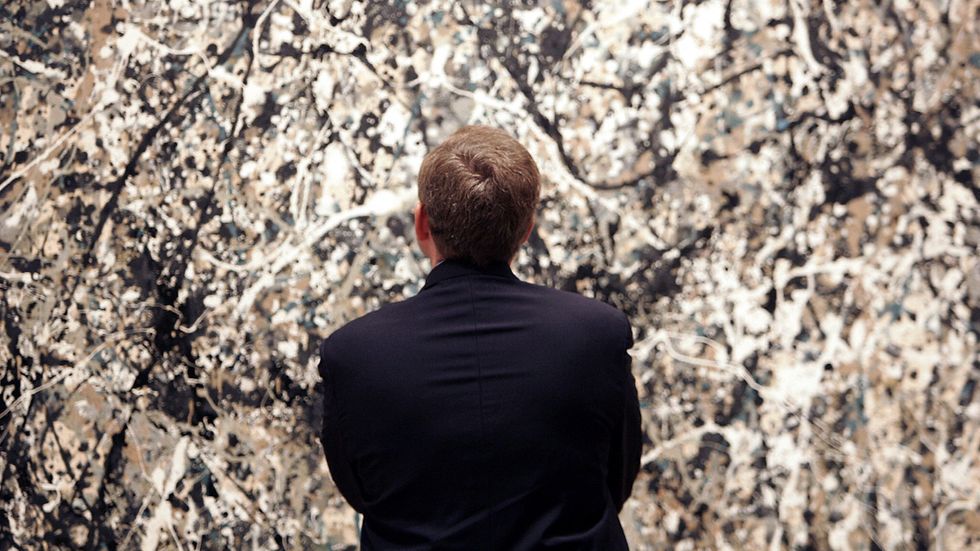 For a long time, the stereotypical idea of the famous American painter was Jackson Pollock, king of the Abstract Expressionists. Opinionated, belligerent, iconoclastic, and inventive, Pollock and his drip paintings ushered in a new, uniquely American school of art that drew the attention and often derision of the art world and the merely “art curious.” Yet, love him or hate him, everyone had a clear picture of the man who came to be known as “Jack the Dripper.” However, a new retrospective at the Museum of Modern Art in New York hopes to educate the public on how Pollock was much more than just his signature style and to wonder at what might have been if he hadn’t been so self-destructive.

For many, Pollock is the American version of Vincent Van Gogh in terms of the tortured genius archetype. Pollock struggled for years not only for recognition, but also for a style worthy of recognition. Pollock didn’t invent drip painting. (Janet Sobel, whose paintings Pollock saw in 1946, may have invented it, if you don’t count the paint-pouring experiments of Dadaists such as Max Ernst decades before Sobel.) But Pollock took drip painting to new heights, helped in no small part by the championing of Clement Greenberg, who hitched his critical fame to Pollock’s ascendance through works such as One: Number 31, 1950 (shown above), a classic drip, all-over work that sets a kind of stylistic baseline in the MoMA exhibition Jackson Pollock: A Collection Survey, 1934–1954.

Before the “Jack the Dripper” reign of stylistic terror, however, Pollock wandered in a stylistic wilderness, searching for that signature approach that fit his vision and temperament. We’re so used to classic, confident Pollock that works such as The Flame (shown above) seem not just pre-mastery works, but works by an entirely different artist. There’s certainly a beauty and energy in such works, but without the Pollock signature, they would have been entirely forgotten today. But even these early works are known as part of the Pollock canon if only as early misfires before the full barrage of genius.

But among those early misfires are some interesting shots in the dark. Seemingly every documentary ever done about Pollock features at one point or another Hans Namuth’s 1951 film capturing Pollock in the act of painting. (Even the 2000 biopic Pollock starring Ed Harris refers to Namuth’s film as a film-within-a-film.) What a different picture we would have if we could see Pollock screen printing (as in the example shown above), a medium more associated with Andy Warhol, perhaps the prime candidate for an anti-Pollock. The MoMA show features screen prints, engravings, lithographs, and drawings in addition to the typical classic drip and non-drip paintings. For a long time even the MoMA kept these Pollock items out of the public eye and, therefore, outside the art historical narrative, as if they would muddy the waters of a clearer perception of Pollock. Now, finally, even the MoMA sees that the truly clearer picture of Pollock is a muddier, messier, more human one of restless invention rather than one-note genius.

The Tate Liverpool recently closed a similar exhibition titled Jackson Pollock: Blind Spots. Blind Spots focused on “black pouring” paintings by Pollock made between 1951 and 1953, when he felt personally and creatively trapped by the drip painting style he had adopted and struggled to move beyond. Already labeled as a genius for that genius style, Pollock feared what awaited him if he ventured too far. The “black pouring” works in many ways represent Pollock peering into the dark abyss of a future of downward failure even bleaker than his youthful struggle upward. In Portrait and a Dream (shown above), painted just three years before his alcohol-fueled, fatal car accident, we see Pollock drip away on the left, but now freed of color, as if he wanted to strip away the style one layer at a time.

On the right, another outpouring of black suggested a face (perhaps his own) to Pollock, so he indulged in some portraiture. For me, Portrait and a Dream embodies Pollock’s dream portrait of himself as an all-around, enduring artist and not just a master of a faddish style. Perhaps the time has come for us to indulge in similar dreaming and picture the Pollock that could have been, the artist that wanted to shed the style that shot him to fame, but quickly became imprisoning. With Jackson Pollock: A Collection Survey, 1934–1954, the “real” Pollock is free at last, just as we the public are free at last to recognize that we really didn’t know his art at all, but can now enjoy these new lessons.