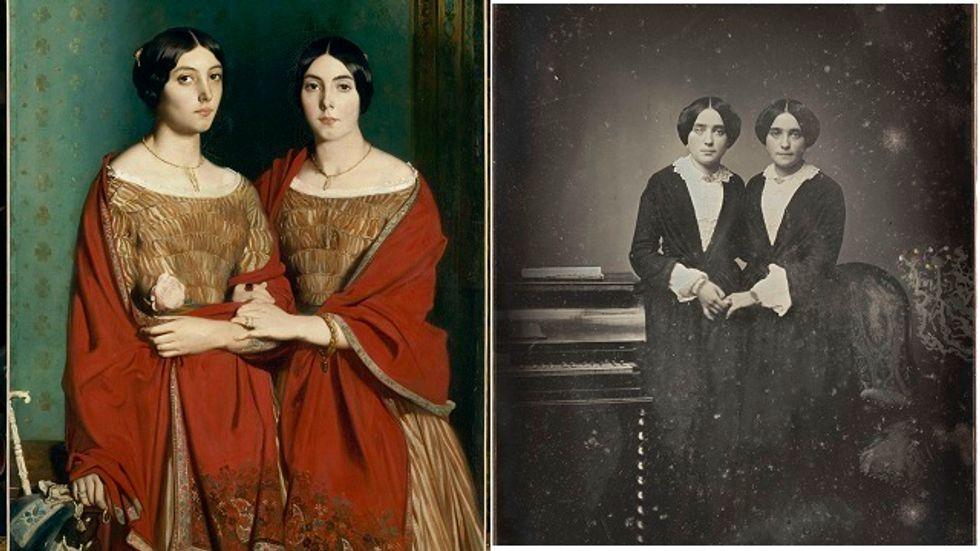 When painter and showman Louis-Jacques-Mandé Daguerre burst onto the scene in 1839 with his Daguerreotype—one of the earliest forms of photography—“Daguerreotypemania” quickly ensued. The art world quickly took notice of the new kid on the block, both negatively and positively. Dominique de Font-Réaulx’s simply titled Painting and Photography: 1839-1914 tells the not so simple story of how photography came to influence the world of painting, and vice versa. “[C]oncentrating less on immediate links between a photo and a given work of painting or drawing,” de Font-Réaulx instead focuses “on the manner in which photography gave rise to a paradigm of representation at once original yet familiar.” Painting and Photography: 1839-1914 outlines how what started as competition soon became an alliance of vision that changed the way we see forever.

de Font-Réaulx, chief curator at the Musée du Louvre in Paris and senior coordinator in the Louvre Abu Dhabi project, masterfully sets up the pre-1839 scene first, allowing you to step back in time and appreciate just how revolutionary and challenging photography first was. Photography enters just as the influence of the Paris Salon declines and the Romantic ideal of the “artist as hero” rises. “The requirement that an artwork should extol—in the service of God or king—was gradually being overlaid by a desire to communicate feelings and effects,” she writes. Daguerre, thanks to the help of Francois Arago (who anointed Daguerre the father of photography over other contenders such as Nicéphore Niépce and William Henry Fox Talbot), assumed the mantle of artist-hero with his “magical” means of capturing images through light onto his eponymous creation. From there, photography continued to grow in influence, not only in popular culture, but also in painting itself. “Intimately linked to painting, through its choice of subject matter, its representational idiom, but also through the multiplication of the image brought by its dissemination,” de Font-Réaulx writes, “photography gave rise to a new relationship to reality and its representation, which then boomeranged on its elder sister.”

Photography’s big break came at the very first two World’s Fairs: 1851 in London and 1855 in Paris. Photography shown at those fairs by Gustave Le Gray, Henri Le Secq, Hippolyte Bayard, and others argued for the new medium’s status as fine art just as many photographers literally argued for exhibition space at Salons and museums. Charges of commercialism, industrialism, and the banality of reproducing quotidian life in all its ugliness clung to photography and even became smears against “photographic” realist painters such as Gustave Courbet.

Slowly, however, photography found a place alongside painting. “Photographic depictions played a key role—though one little noticed and commented on at the time—in a newfound attention to novel motifs and to the transience of the atmosphere,” de Font-Réaulx argues. Placed on a page facing a seascape photo by Le Gray, Courbet’s 1869 painting The Wave clearly owes a debt to the photograph’s ability to capture the fleeting moment for the painter to capture once more. La Havre’s Auguste Autin’s photographic series of atmospheric effects may have influence a young man from his same town—Claude Monet—to paint the series of paintings that would found Impressionism. de Font-Réaulx dazzles with a selection of convincing examples illustrating her points without ever losing sight of the bigger picture of the paradigm shift in painting spurred by photography. Likewise, she shows the reciprocal effect on photography, particularly in portraiture, such as in the anonymous portrait of two sisters eerily similar to Théodore Chassériau’s painting (shown above), where photographers borrowed painter’s “tricks” to elude the limitations of the still-young technology.

Jean-Léon Gérôme emerges from the pack not only as a transitional figure, but as a different kind of hero adopting photography rather than rejecting it. A teacher as well as an working artist, Gérôme accepted photography as just another means to achieving aesthetic goals and taught his students  to feel the same. A prominent Orientalist, Gérôme actually trumpeted his use of photography as a way of boosting his documentary credibility. de Font-Réaulx’s masterfully reads Gérôme’s 1861 painting Phryne before the Areopagus, which features a bravura female nude based on a photograph by Nadar, as a statement on “the latent ambiguity surrounding the academic and the erotic nude” complicated by photography’s offering of an actual, rather than ideal woman’s body. Such little battles and little triumphs fill Painting and Photography: 1839-1914.

Seeing Gérôme’s name made me think instantly of his pupil, American artist Thomas Eakins, who made great use of photography in his work.  Alas, Eakins fails to appear, as do many non-French artists of the period who made use of photography in their painting. de Font-Réaulx defends (justifiably) the book’s French focus by arguing that “it was in that nation that the arguments relating to [photography’s] nature, function, and use were most amply rehearsed,” with “the Paris Salons [the place] that the artistic maelstrom brewed and continued to rage until the end of the nineteenth century.” However, the author does manage to venture abroad occasionally to great effect: to America, where Timothy O’Sullivan’s photos helped spread the mystique of the American West; and to England, where Pre-Raphaelite photographer Julia Margaret Cameron, de Font-Réaulx writes, “for the first time, in the service of a new and subtle vein of aesthetic grace, [used] the hitherto photographic accident of ‘soft focus’… to significant artistic purpose.”

Writing of painters (such as Fernand Khnopff) who denied their use of photography, critic Ernest Lacan described those painters’ relationship to photography as “like a mistress whom one cherishes but hides.” Dominique de Font-Réaulx’s Painting and Photography: 1839-1914 allows nineteenth century French painting finally to allow its “mistress” photography to come out of the closet. Many studies of the photography-painting link in regards to individual works or individual artists have appeared in the last few decades, but de Font-Réaulx’s study aims at an overarching theme that recreates the controversy itself as it played out in the galleries, studios, and in the images themselves. Written in an engaging, accessible style that never compromises on academic rigor, Painting and Photography: 1839-1914 provides a template for studying the early influence of photography on painting (and vice versa) for years to come.

[Many thanks to Rizzoli USA for providing me with the images above and a review copy of Dominique de Font-Réaulx’s Painting and Photography: 1839-1914.]