Can We Learn to See How Artists See? 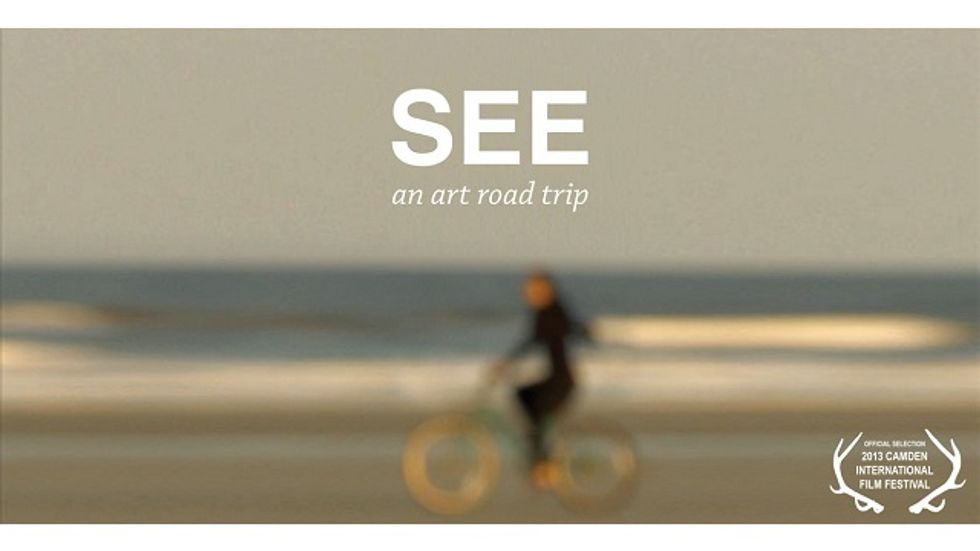 We all dream of mastering a skill like a pro—to skate like an Olympian, sing like an Idol, or go to the hoop “like Mike.” What if we could learn to see how an artist sees? “It’s so important to move through the world with this kind of wonder,” artist Bo Bartlett says of putting on an artist’s eyes in SEE: An Art Road Trip. “It all passes so fast.” Directed by Bartlett with his wife and fellow artist Betsy Eby and filmmaker Glenn Holsten, SEE challenges and inspires us to see the world through an artist’s eyes not necessarily in hopes of making art but, more importantly, in hopes of our appreciating the beauty that rushes past us and our high-speed everyday lives. Part road trip, part art history lesson, and part existential drama, SEE at all times conveys a vision of a more aware, more visually activated life that most of us only dream of but can finally experience, if only fleetingly, through these pros’ eyes.

Both a realist artist with heavily symbolic content and an insightful filmmaker, Bo Bartlett sees the world with an artist’s eyes but combines that vision with a poetic, philosophical voice. (Read some of his website’s seasonal musings to get the full effect.) When Bartlett married Betsy Eby in 2007, they united not just their lives, but also their unique artistic styles. Eby works in encaustic, specifically colored beeswax, which she torches to create “nature-based abstraction,” as described in the film. (See a video of Eby “painting with fire” here.) Thus, realism and abstraction, but both rooted in nature, came together in their relationship, which naturally spilled over into that most ancient of journeys—a quest, in this case a quest to capture the essence of seeing.

The concept for SEE is deceptively simple—two people in a car crossing America with a camera and a dog in search of beauty and how one can become fully open to embracing that beauty. Their trip and the film itself could easily have detoured into indulgence—two beautiful, talented people so clearly deeply in love that you might envy them to the point of hatred—but they steer clear of such potholes and never lose their sense of invitation, a beckoning to become an artist of seeing and living in the beauty we see. Bo and Bets’ “excellent adventure” takes us along for the ultimate art lover’s road trip, essentially completing my personal “bucket list” in under an hour: Robert Smithson’s Spiral Jetty, Walter de Maria’s The Lightning Field, Gutzon Borglum’s Mount Rushmore, the quilters of Gee’s Bend, the Whitney Biennial, Norman Rockwell’s home and studio, Winslow Homer’s Prout’s Neck coastline, a Maine lighthouse Edward Hopper painted, the Olson House in Andrew Wyeth's Christina's World and other paintings, and even the Cadillac Ranch. They somehow manage to fit in a lunch, complete with blueberry pie a la mode, with Wyeth and his assistant/model Helga Testorf that may be the last filmed interview with the artist before his death in 2009.

If Bartlett is the voice of SEE (a false dichotomy since Eby’s an equal partner in the philosophical conversation), Eby is the body. (In addition to providing a body for SEE, Eby, a classically trained pianist, helps provide a soundtrack by performing much of the music herself.) Rather than the “transparent eyeball” of Ralph Waldo Emerson's essay “Nature” that could be a presence-less presence as it sees, SEE emphasizes the physicality of seeing—the necessity of being there and “seeing” with your whole self. When Eby approaches Smithson’s Spiral Jetty, we get a true sense of the scale of that work not as it engulfs her but rather as it embraces her (and, vicariously, us) into its strange, swirling beauty. Similarly, Bartlett shoots Eby from below at Mount Rushmore and momentarily places her sculpted features among those of the presidents, visually cutting those monumental figures down to everyman (and everywoman) size. Walking, stretching, dancing, bicycling, and even trampolining, Eby conveys materially the joy of seeing and being seen by her beloved. Even though SEE “completed” my bucket list for me, it only makes me want to be there to see it for myself more.

Into the film and Bartlett-Eby’s marital bliss, fate complicates matters as Bartlett begins to experience vision problems. After some fuzzy medical advice, they eventually learn that a tumor pressing against Bo’s optic nerve requires surgery. Could there be anything more tragic than the idea of an artist going blind? Through pure synchronicity, Bartlett’s ailment underscores the value of the gift of sight as well as the finite nature of that gift. Accompanied by footage of their car driving through the night around a bend, Bartlett ponders his future and muses on how life is like a bending road that you have to trust goes on beyond what we can see at that moment. SEE manages to include Bartlett’s dilemma into the drama not by exploiting it, but rather by making it all part of the bigger picture. At another point, Bartlett neatly encapsulates the goal of the film as challenging everyone to become “activated” by “seeing everything as art” flush with “great meaning,” akin to a dream state in which “everything has intentionality, everything is beautiful.” Even that tumor contains an odd, ironic beauty in that its moment of discovery comes in the middle of a project about the discovery of true seeing and its momentous value. The last images we see in SEE show Bartlett in a hospital room preparing for the surgery that could either save or end his sight—an unforgettable, cliffhanger embodiment of the high stakes of vision for us all.

Spoiler alert—Bartlett’s surgery succeeded and he still paints today, with little difference between his pre- and post-surgery paintings save for how we (and maybe he) perceive them. Did Bartlett paint Blind Tom in 2010 thinking “There, but for the grace of God, go I”? After watching SEE, it’s impossible not to think such things in the face of a sightless possibility. SEE: An Art Road Trip will open your eyes to the gift of sight and activate in your soul the grace of appreciating everything from works of great art to images as simple as the way the wind ripples through a dog’s fur as it sticks its head out the car window. SEE: An Art Road Trip takes you on a joy ride in every sense of the word and shows you what you’ve been missing all along.

[Many thanks to Bo Bartlett and Betsy Eby for providing me with access to and the image above from their film SEE: An Art Road Trip, directed by Bo Bartlett, Betsy Eby, and Glenn Holsten.]