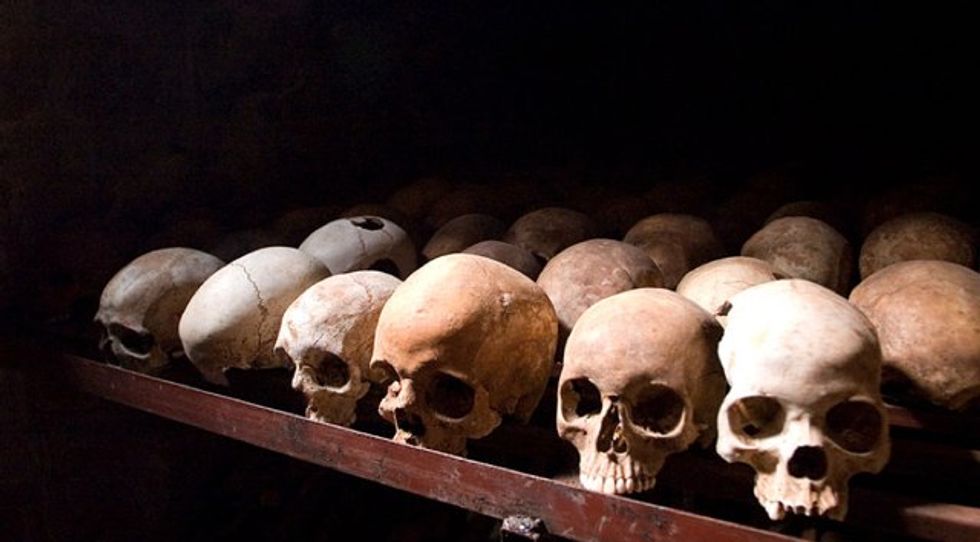 Doing any networking this week? If you aren't, you probably feel you should. For a generation we've been hearing that rich social lives will find us jobs, get our chores done, preserve our sanity and even make us live longer and healthier lives. In policy jargon, these ties to other people create a major asset—our "social capital." This is why do-gooder organizations promote social capital from Afghanistan to Zimbabwe. Yet social networks have, as this paper puts it, a "dark side." During the Rwandan genocide in 1994, it reports, people with robust social networks were more likely to take part in the massacres. It was their less connected neighbors who abstained.

The paper, in this month's Journal of Conflict Resolution, is based on research conducted in Rwanda in 2009 by its aptonymically named author, Omar Shahabudin McDoom. (The published paper is paywalled, but you can get an earlier version of the entire paper here.) McDoom worked in Tare, a community in southwestern Rwanda, which had 647 households in 1994. In April 1994 its population was about 6 percent Tutsi. Then militant Hutus organized the mass slaughter of the Tutsi throughout the nation. By the time the genocide ended some three months later, slightly more than 6 in every 10 Tutsi in Tare were dead, and about a quarter of the community's adult Hutu men had participated involved in the killing. That made it a fairly typical Rwandan community.

McDoom surveyed 116 Hutu men in Tare about their social ties—37 who had participated in the genocide (which he defined as actually harming another human being, not simply manning a roadblock or passing on messages) and 79 who had refrained from joining the slaughter. (He also interviewed individuals at length about their experiences.) Each of the men who participated in genocide had, on average, 20 social ties. Men who did not kill had markedly smaller networks, with an average of 13 connections each.

This was a general effect—killers and mutilators had generally larger social networks, so they had more ties of all kinds, to both other participants in slaughter and to non-participants. However, we all know not all social ties are alike—connections to parents are different, for instance, than connections to fellow church-goers or co-workers. Did some kinds of connection have more influence?

The answer, McDoom writes of his statistical analysis, is yes: ties of kinship and neighborhood were influential in a way that other social connections weren't. Having relatives who were involved in the killing increased the odds that any given man would have participated himself. And close kin ties (parents, brothers, sisters, children) had more impact than more distant forms of family relation. On the other hand, for any given individual, having more neighbors in a social network increased the odds of his having participated—whether or not the neighbors did. McDoom thinks this might reflect the difference between types of ties—neighbors might simply be efficiently passing along information (the more neighbors, the more news you get about the massacres and your potential to join in) while family might influence each other with their actions (if my uncle took part, then why not me?). Other kinds of social connection had no particular influence on their own, though having more ties in general made a man more likely to join in the killing.

So what is it about social networks that makes them helpful to genocidal killers? McDoom thinks there are three traits that matter. First, networks spread information. Following the assassination of Rwanda's Hutu President Juvénal Habyarimana on April 6, 1994, hardline Hutus broadcast their anti-Tutsi call to arms via social ties. Almost all the Rwandans in McDoom's survey had received that message via word of mouth, not radio or other media. For example, several interviewees mentioned a local politician named Rekeraho, who'd been cooperative with Tutsi during the first days of the crisis. But after attending a political meeting in the nearby town of Butare, this man came back to Tare with the message that the Tutsi were the enemy. In other words, McDoom writes, Rekeraho acted as the node between one network, in a nearby large town, and the more peripheral network of Tare.

Secondly, social networks in Tare were tools for recruiting killers. The organizers of the genocide naturally used their social networks (friends, relatives neighbors, fellow churchgoers) to find men to take part in the killing.

Finally, social networks were an effective means of spreading the material rewards of the genocide to the killers, and (to a lesser extent) shaming and punishing those who did not join in. This mattered because money or some material gain was the most common motivation people ascribed to the killers in the interviews McDoom did to supplement his analysis. As one of his subjects put it: "In the first few days people went by force. But later they went willingly because they saw they could get property like roofing tiles and mattresses."

For that to be true, though, then the perpetrators' social contacts should have been made up mostly of other perps. Instead, McDoom notes, the killers' social networks were full of both participants in mass killing and non-participants. Killers had larger social networks than non-killers, but the people in their networks were not like-minded. Moreover, as he writes, if each man's social network was created by "birds of a feather" flocking together, then the links people choose—friends, spouses, church, political ties—should have been most influential. It is in those voluntary links, after all, that the birds find one another. However, he found that social connections people don't choose — family, neighbors—had the most influence.

Now, it's not news that, as McDoom puts it "social networks and social ties, the sources of social capital, have a dark side." The mafia and al-Qaeda are both dense social networks, after all. Robert Putnam, whose Bowling Alone did so much to spread the idea that social capital matters, pointed out in that book that some social ties (the sort that bind people within their own group) do not promote harmony across ethnic or other boundaries, and in fact can do the opposite.

Still, while the influence of social networks has been invoked to explain the spread of good and bad habits, from voting to overeating, they haven't been much used to understand violence. In the field of genocide research, the debate still tends to focus on individuals. Some search for the key traits that make one person more prone to engage in genocidal acts. (Here is an example.) This hasn't gone so well; people with the supposedly crucial trait keep turning up as both killers and non-killers. This leads others to maintain that the killers are no different than anyone else, and so look for large-scale political, economic or ecological explanations. If we can't find some psychological indicator, the cause must be some force that effects everyone. (The Rwanda genocide has been blamed on the country's high population density and its farming methods, for example.) Yet these explanations also falter before the variety of people's responses: Why are some people affected by the general force and others immune?

A network approach, McDoom suggests, provides a new level of analysis—finer-grained than some nation-wide explanation but more realistic than a theory that looks at each person in isolation. Perhaps there, in the details of their relationships, we can find the reason one neighbor will take part in murder while another refuses. Such an understanding could provide tools for disrupting networks that are facilitating mass violence, or at least point to who is most vulnerable to the temptation to kill. And it would get us to stop thinking that social capital is inherently a good thing.

Illustration: Skulls at the Genocide Memorial, Nyamata, Rwanda. Via Wikimedia.