How Alchemy Led to the Modern Economy 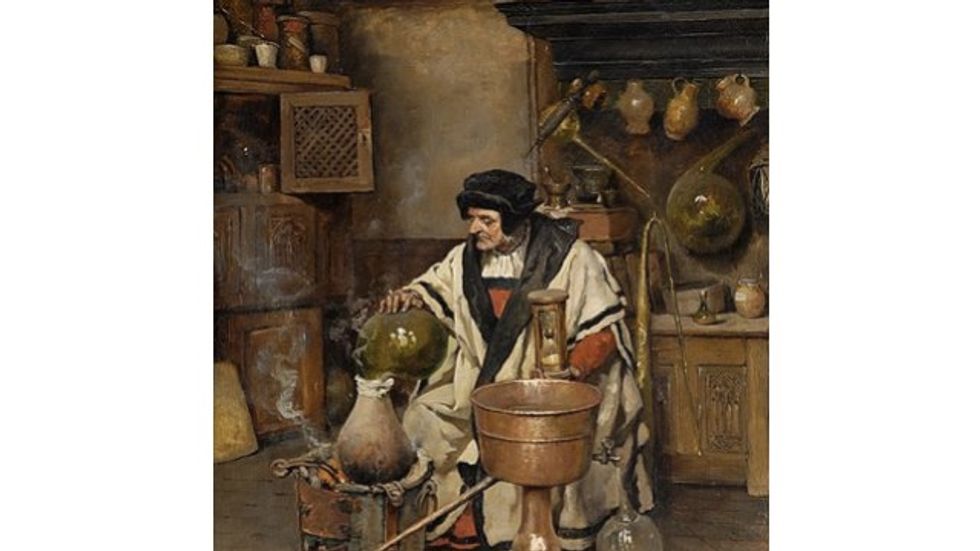 For a certain kind of economic conservative, the cardinal sin of modern governments is printing money whenever they please. Currency's value should be tied to something real, they say, as it was for Americans before 1971, when we were on the gold standard. Let there be a natural limit on the money supply! Let people have to work to create value! Alas, as Ron Paul once said, "too many politicians believed that a free lunch was possible and a new economic paradigm had arrived. But we’ve heard that one before — like the philosopher’s stone that could turn lead into gold. Prosperity without work is a dream of the ages." That line sprang to mind yesterday as I read this fascinating post by the economic historian Carl Wennerlind. It seems advanced thinkers in 17th-century England also thought creating money from nothing was like alchemy. They didn't mean it as a diss, though. They thought alchemy was great. They wanted to wreak alchemical wonders on the money supply, and if they hadn't succeeded, there'd be no modern world.

It's often said that hard-money financial conservatism is independent of social-values conservatism, but Wennerlind's historical delvings suggest that this distinction may be more a matter of emphasis than of essence. Social-values conservatism, after all, is premised on the idea that there are eternal truths about life that we cannot improve upon. Therefore what looks like "progress" to liberals is actually a falling away from an unchanging ideal.

That view of "social issues" sounds, to my ear at least, very like the view of economics propounded by mercantilists in the 17th century. Money, they believed, existed to sustain an unchanging and natural order in society, as Wennerlind explains in his description of their views: "When money plays its proper role as a measure of value and medium of exchange, society’s finite wealth flows to its appropriate place in the social hierarchy and the balance of power between different segments of society was maintained. When the proper balance is reached it is also possible to uphold the traditional social and moral order of the body politic." When the money supply was too tight, though, the nation's order was threatened. So the government should do everything it could to keep its gold and get more from other countries (for instance, by selling more to them and purchasing less).

After the Cromwellian revolution, though, a new philosophy of money arose in England, based, Wennerlind explains, on a different premise. Society, in the new view, wasn't constantly striving to keep itself in an unchanging perfect condition. Rather, it was expanding all the time—in knowledge, power, technical ability. The new thinkers didn't see a static nation whose economy needed a fixed amount of cash. Instead, they saw an economy that would just keep growing and growing and growing along with society. "The main challenge now," writes Wennerlind, "was to find a way to expand the money stock so that it could keep pace with the ever growing world of goods."

What to do, then, about the absolute limit on the amount of gold or silver or other valuable stuff in the world? The innovators' first notion of a solution, Wennerlind writes, was obvious: Make more gold and silver, by alchemy. This was, after all, long before alchemy was read out of the precincts of respectable science (many great intellects, including Baruch Spinoza, respected the craft and some, including Isaac Newton, even dabbled in it).

Long story short: Turning lead into gold didn't work out. So, writes Wennerlind, it was on to Plan B: Create money based on trust, rather than cold, hard metal. Metaphorical alchemy replaced the literal kind, and a good bank, in the words of one of these modernizers, would be "capable of multiplying the stock of the Nation, for as much as concernes trading in Infinitum: In breife, it is the Elixir or Philosophers Stone."

Wennerlind's point here is not simply that credit replaced alchemical voodoo as a means to create more currency without having to go mine gold. He's saying that, along with alchemy, many other ideas from the scientific revolution were essential to the birth of the modern economy. For example: When money is based on credit rather than stuff, people need to be sure they can trust the currency. The guarantees devised to solve that problem, were, according to Wennerlind, much the same as the guarantees scientists offered about the knowledge they were turning up in their experiments.

As scientists explained each step of their experiments, so banks would issue honest reports of their dealings, letting the public make its judgment based on shared facts. As scientists were expected to behave with aristocratic honor and integrity, so banks would be entrusted only to a virtuous elite. As scientists sought out fraud and punished it, so the banking system would root out counterfeiters, and punish them even more severely (generally, by hanging). This is why, Wennerlind said, 17th century intellectuals did not find it at all strange that Newton should take time away from his scientific pursuits to become, in 1696, the Warden of the Royal Mint.