A new study of over 700 human brains has shown a genetic "signature" for common psychiatric disorders. 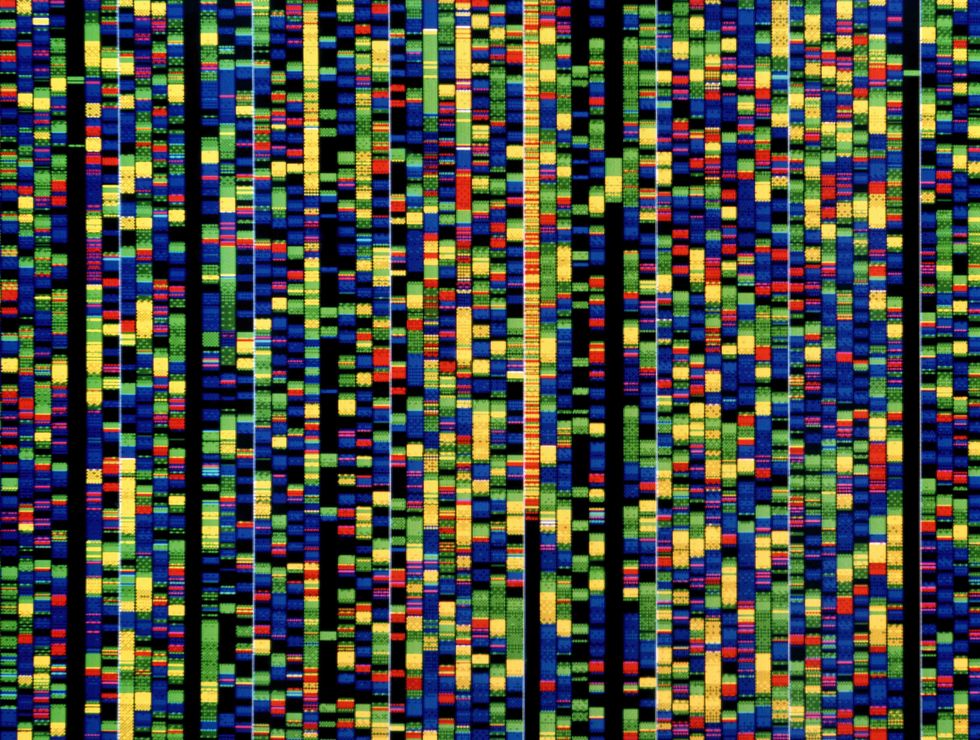 DNA sequencing. Computer screen showing a sequence of base pairs forming part of the human genetic code. The three billion base pairs that form the genetic code of human DNA (deoxyribonucleic acid) are collectively known as the human genome. (Getty)

In his book The Gene, journalist and physician Siddhartha Mukherjee borrows Richard Dawkins’s description of genes not as 'blueprints' but 'recipes' that specify processes inside of our bodies, calling them 'formula for forms.' Our understanding of disease must now consider the most elementary of molecules, he continues. In order to wrap our heads around the nature of disease, scientists "must break the world into its constituent parts—genes, atoms, bytes—before making it whole again."

One of our great strengths as humans is our ability to recognize patterns, to break down the whole into its parts to better understand how it became whole in the first place. In medicine, this has led to errant diagnoses like when the Greek physician Hippocrates identified the four humors—the notion that all disease stems from one of four bodily fluids (though in fairness, autopsies were taboo when the Greek physician lived). While some patterns are highly speculative, we’re getting better at recognizing ones that matter. A groundbreaking study recently published in the journal, Science, has discovered patterns of genetic activity that overlap with five major psychiatric disorders: alcoholism, autism, bipolar disorder, depression, and schizophrenia. This revelation could help researchers develop potential treatments for each of these diseases. For the first time, it also provides a physical basis for some of our most common disorders.

Analyzing data from the postmortem brain tissue of over seven hundred human brains, researchers found similar levels of certain molecules in those suffering from autism, bipolar disorder, and schizophrenia. Further analysis found links between bipolar and depression, as well as depression and autism.

The conditions show activation of astrocytes, star-shaped glial cells in the brain and spinal cord. Among their many functions, these cells provide biochemical support to the cells that help form the blood-brain barrier, provide nutrients to nervous tissue, and play a role in the repair and scarring of the brain and spinal cord after traumatic injuries. The 'signatures' researchers discovered in this study affect how brains cells communicate with one another.

Many disorders have physical characteristics that help define the problem. This has not been the case with psychiatric disorders. By identifying the gene expression of the above disorders, this new research could help create a physical checklist for doctors to use in future diagnoses. “We’re on the threshold to using genomics and molecular technology to look at [mental illness] in a way we’ve never been able to do before. Psychiatric disorders have no obvious pathology in the brain, but now we have the genomic tools to ask what actually goes awry in these brains.”

The researchers mention limitations in the study. Genetic variation, they write, is only one driver of expression variation. Environmental factors must be taken into consideration. But they did take precautions in their assessment. To counter against antipsychotic medication the volunteers might have been on before they died, the researchers gave PCP to nonhuman primates to evoke psychosis, then treated them with antipsychotic meds to observe the genetic activity.

Geschwind compares this research with genetic breakthroughs occurring in cancer studies. He calls this study a 'road map' to help in discovering the underlying mechanisms at the foundation of these seemingly disparate disorders. Instead of diagnosing patients on observation alone, for example, genetic testing could offer more precise analyses of potential conditions and treatments in the future.