Why legal marijuana businesses are being kicked off social media

A number of marijuana companies are kicked off social media without explanation, which is going to force the cannabis industry to answer questions of identity. 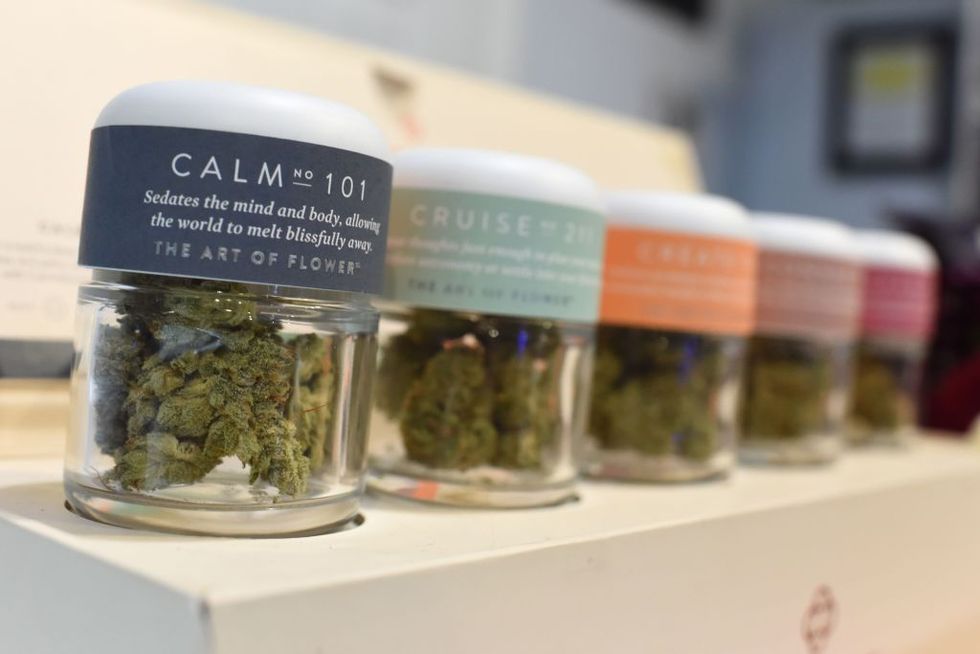 Marijuana for a calming effect is for sale at the Higher Path medical marijuana dispensary in the Sherman Oaks area of Los Angeles, California, December 27, 2017. (Photo by Robyn Beck/AFP/Getty Images)

While the debate over the role technology companies played in allowing foreign influence to affect American elections is raging, a quieter battle is unfolding behind the scenes. While this skirmish is nowhere near as consequential as Russian trolls blasting out Jesus memes to denounce Hillary Clinton, for the burgeoning marijuana industry a high hurdle has been placed in its path. Yet marijuana is going through a growth spurt and no one can foretell what kind of adult it will become. The marketing of cannabis has always been comedic: tie-dyes and lava lamps and short-term memory lapses. As the bud now earns growers serious cash (and states serious tax revenue), new entrepreneurs are desperately trying to scrub the plant’s image clean.

CBD oils, some psychoactive, some not, are packaged like high-end lotions, with clean fonts and health-focused logos. One vape company sells blends like “Bliss,” “Relief,” and “Sleep,” using our current scientific understanding of Indica, Sativa, and hybrid strains to dose you. While plenty of companies retain hippy pinks and oranges, this push toward social and medical acceptance is forcing us to rethink how marijuana should be presented.

Which is where some companies are running into trouble. As CNET reports, one Las Vegas dispensary’s Instagram account has been deactivated on six different occasions. When business owners requested assistance from its parent company, Facebook, the only response they received was having their account shut down again.

An answer to their dilemma is (kind of) offered on Instagram’s guidelines, however: “Offering sexual services, buying or selling firearms and illegal or prescription drugs (even if it’s legal in your region) is also not allowed.”

Those parenthetical marks say much in few words, though ambiguity is not really cleared up as to why some marijuana companies are continually being digitally shuttered while others have built followings untouched for years.

Which brings up an important point: how are other substances treated? Budweiser’s Instagram feed has over 286,000 followers. In its description, the company asks you to follow only if “you’re of legal drinking age,” but who knows how that request is monitored, if at all. Liquor companies have no problem maintaining their handles, which is fair given that alcohol is neither illegal (to a certain age group), nor does it require a prescription.

Tobacco companies are under much stricter scrutiny, though they’ve taken advantage of social media through a variety of means, including sponsored “reviews” and hashtags. While Facebook specifically bans the promotion of tobacco, this has not stopped companies from finding ways to infiltrate feeds. Cigars and vapes especially seem to proliferate. Again, not illegal (depending on age), nor prescribed (anymore), but given what we know about the health consequences of cigarettes, both the government and technology companies have held this industry closer to the fire.

The same holds true for marijuana: there are ways to populate Instagram and Facebook. Two hashtags, #marijuana and #cannabis, feature over 20 million Instagram posts. You’ll find a range of photos and videos, including close-ups of flowers, reviews, oils, vapes, music, and stoners taking bong hits. A quick scroll through either uncovers plenty of businesses taking advantage of free advertising, though how long they’ll last is anyone’s guess.

Or not. In 2016, two Canadian companies were booted with no explanation. A Fort Collins, Colorado dispensary has had equally bad luck. In every situation, Facebook never responds to requests for reasons, at least according to the companies.

A customer buys cannabis products at MedMen, one of the two Los Angeles area pot shops that began selling marijuana for recreational use under the new California marijuana law on January 2, 2018 in West Hollywood, California. (Photo by David McNew/Getty Images)

The existential question that must be faced is not marijuana’s legality, however. Regardless of whatever nonsense Jeff Sessions is spouting this week, states—and science—have moved on. Tech companies are going to have to catch up as well. Which brings us to a bigger question, one that must be faced by all sides in this equation, especially those involved in the marijuana industry.

If you’re going to market your product as recreational and include appropriate warnings about usage and dosage, then you should fall into the same camp as cigars and whiskey, subject to the same community guidelines. You would be monitored and punished for overstepping boundaries, but you'd also have free access to consumers through social media.

But—if you’re touting the medicinal benefits of cannabis, then you should be treated similarly as pharmaceutical companies, subject to the same clinical rigor for proving the efficacy of your product. Like the tobacco industry, pharmaceutical companies undergo intense scrutiny in advertising and marketing, even if that has too much wiggle room in America. Legislators need to reexamine how every product promoting medical benefits is marketed, including so-called natural remedies, which marijuana is often associated with.

The problem is that marijuana currently exists in an uncomfortable gray area. Part of this is due to the federal government not paying attention to advancing scientific understanding of its therapeutic benefits. This is a fight researchers and companies have to wage on legislative grounds and in the voting booth.

Marijuana businesses cannot be both recreational and medicinal and expect to play by both sets of rules, however. If they want to be treated on equal footing with other substances, companies must choose a path forward. Consider coffee: there are health benefits associated with this bean, but the innumerable coffee shops and roasters on social media generally do not post about them. Taste, aroma, eye candy, and their relationships with growers dominate their feeds.

Marijuana companies will have to solve their own identity crisis in such a manner. The reality is that some will continue to market their products in hotboxed Impalas while others will attempt to gain access to the supplements aisle. As long as this dissension exists we simply can’t expect much better from the tech companies monitoring their platforms. The hidden algorithms win again.