Is Bullying A Public Health Issue?

Lise Feldman Barrett says emotional harm is worse for your health than physical harm. The legal system needs to catch up to the science. 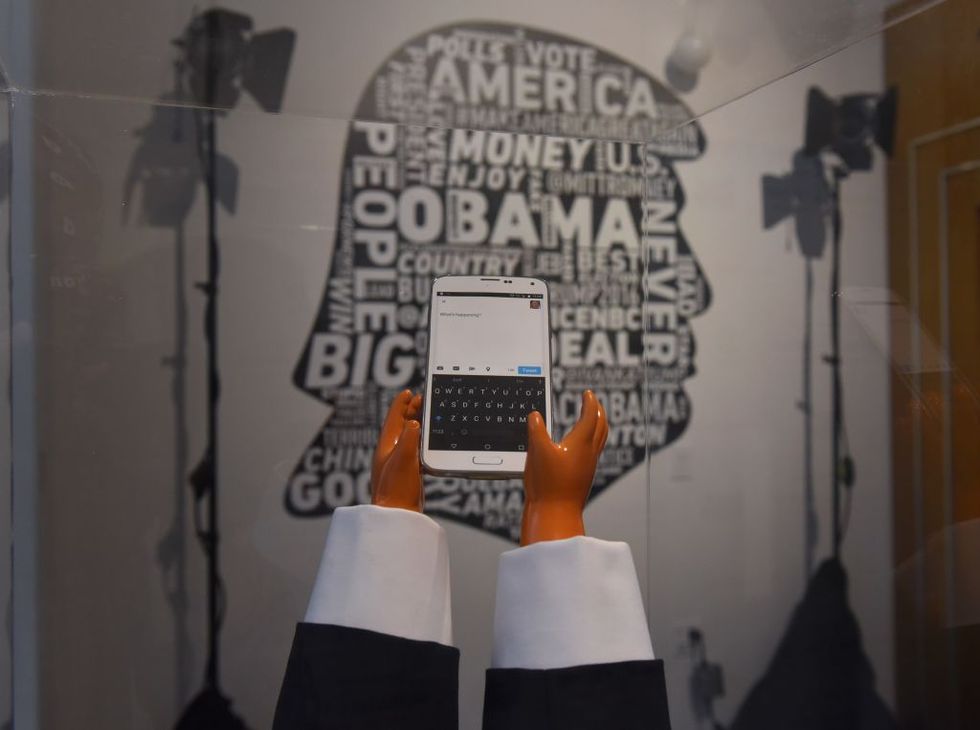 One of the items on display as 'The Daily Show with Trevor Noah' holds a press preview June 15, 2017 as 'The Daily Show Presents: The Donald J. Trump Presidential Twitter Library', the first of its kind, showcasing our Commander in Chiefs preferred vessel

Lisa Feldman Barrett does not want her leg to be broken. But she’ll choose a fractured tibia over the atrophying of her hippocampus any day. A stupid choice in the shaky world of hypotheticals, she tells me, but truth is it’s easier to mend a bone than grow back neurons.

Barrett knows plenty about neurons. A University Distinguished Professor of Psychology at Northeastern University, Barrett’s new book, How Emotions Are Made: The Secret Life of the Brain, is a groundbreaking investigation into how our brain creates emotions. While I’m going to discuss this process in an upcoming article, the timeliness of her theory on neuronal damage and justice cannot be ignored. Suffice to say that instead of being reactionary animals in a world of stimulation bombardment, Barrett believes, with plenty of evidence, that humans are creators of cognitive and emotional experiences every step of the way. Emotions don’t happen to you; you create them.

In her book she contemplates how the government treats the concept of harm:

If she were to break my leg, she says, she would be held accountable. But what if she berated me? Or inflicted casual brutality, as, say, countless trolls on Twitter every day? Communication and social skills are two reasons we’ve evolved into an apex predator that took control of the planet, yet the same skills compromise our public health when we peck out immature rants on social media. As she says, with a slight laugh,

This problem is especially damaging to children. Bullying and abuse have long-term effects. Children who are bullied become sick more easily throughout their life due to compromised immune systems. Their hippocampus and parts of their prefrontal cortex suffer neuronal death. Chances they’ll develop diabetes, heart disease, and certain cancers increase.

Even worse, their lives might be shortened. The protective caps at the end of your chromosomes are called telomeres. Each time a cell divides your telomeres are shortened. When they end up too short, you die. One of the main adversaries of telomere length is stress. Bullied children have shorter telomeres.

Barrett recalls that old trope about sticks and stones—“names can kill neurons” is how she phrases it. Since our legal system does not associate words with weaponry she believes our society is ill-equipped to deal with pervasive bullying. And this is no longer a childhood phenomenon. We elected one of the biggest. What some call strength is really destruction en masse. Yet the blame is not aimed at him alone.

If you look at what has happened to public discourse and entertainment over the last decade you can see that we have a culture of casual brutality. The way that people look at and speak to each other has really deteriorated.

She mentions network television sitcom research that investigated the frequency in which verbal abuse, bullying, and relational aggression occurs. Once every four to five minutes a character is denigrated, usually to a laugh track. The victim often responds casually, taking it in stride as if no offense has been rendered. That’s not what happens in real life.

Barrett admits she’s not a lawyer and is not equipped to deal with the specificities of law. Yet she believes emotional pain needs to be considered. In the long run it’s more damaging to the health of victims. Because emotional pain is not quantifiable in the way a broken leg is it’s difficult to measure the effects of bullying and verbal abuse. Yet over 20 percent of children have reported being a victim or perpetrator of bullying, while 13 percent have been involved in electronic bullying. Their pain and suffering is real.

Though uncertain how to approach this growing problem she says the research is crystal clear. Barrett casts aside any notion this is a liberal plea; the evidence is not debatable. And it’s not only affecting children. She links the record numbers of people on opioids and anti-anxiety and depression meds as part of the larger problem. Words can harm you.

If you and I wanted to sit down and create an environment that would make people sick and distressed, we couldn’t have done a better job, frankly. This is why people think the political climate in the United States is very seriously a public health issue.

Our toxic political climate is doing irreparable damage to the national nervous system. We can no longer turn to elected officials for guidance, which brings into question their leadership capabilities. Our life spans are being shortened tweet by tweet. What’s trickling down helps no one, perpetrator or victim. We’re all in this together. The longer it takes to realize that, the more we all suffer.