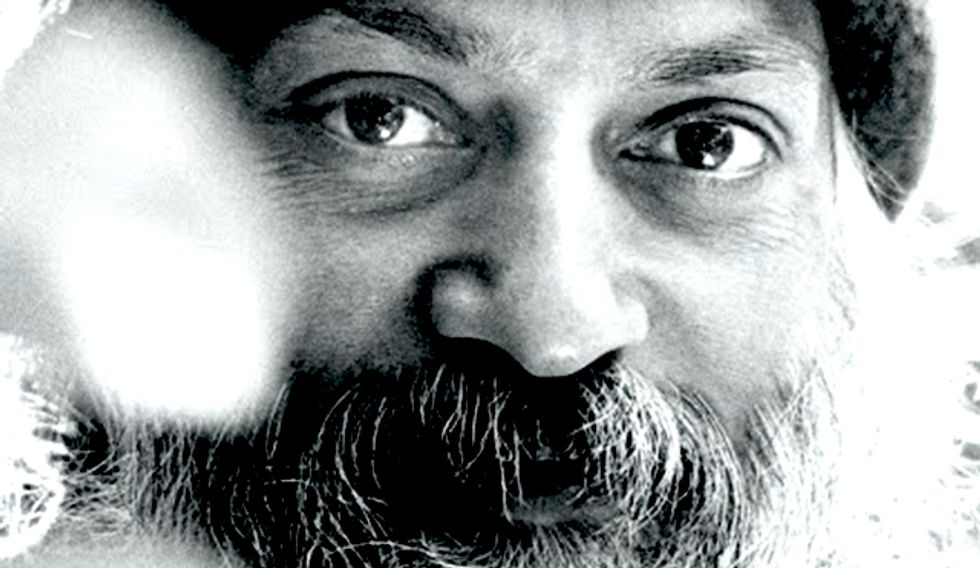 An estimated two million American adults are involved in cults. While the definition of what a cult is ranges—some claim all religions to be one—it usually involves a charismatic leader who serves as an intermediary between divine knowledge and those willing to follow him or her. Unlike the traditional teacher-student relationship in which the student is eventually on the same ground (or even surpasses) the teacher, cult leaders allow no one beyond them.

Instead of focusing on what makes a cult leader, however, I've found another question intriguing: why do some people revere ethically questionable figures that have been elevated as spiritual guides after their death?

Chandra Mohan Jain is a case in point. The Kuchwada native spent his entire life attempting to overcome stigmas attached with a small village upbringing. Renaming himself Acharya Rajneesh a few years after his supposed enlightenment at age 21 in 1953, the university lecturer became known as a dynamic and intelligent speaker, a trait that led to trouble with the Indian government. Besides his open-minded take on Tantric philosophy—he became known as the ‘sex guru’—Rajneesh railed against Gandhi, who he bitterly criticized for celebrating poverty. The idea of purposefully living in squalor would prove antithetical to Rajneesh’s entire philosophical system.

Today you’ll find Osho quotes plastered across yoga studios and social media all over the world, but during his American life he was known as Bhagwan Shree Rajneesh, yet another incarnation he assumed before moving to Oregon in 1981. He decided to move straight to the source of the income he was pulling in at his ashram in Pune. In short order he acquired an entire fleet of Rolls Royces, preaching the prosperity gospel. Let the Gandhians spin their loincloths, Osho had expensive cars to be chauffeured around in. Ninety-three in total.

Rajneesh’s American vacation was short-lived. Four years later he was deported, being detained on the east coast after attempting to flee the country. His followers had planned to poison the food supply of the surrounding region, the Dalles, as well as attempted to assassinate a local politician (as well as kill each other). Rajneesh’s early love of socialism had given way to a fond appreciation for capitalism. The locals who were giving him problems taking over the entire region for his compound would have to be forced out. He also ran into trouble for not paying property taxes.

Osho was the name he assumed near the end of his life, shortly after 21 countries denied him entry. Today you’ll find his many books, lectures, calendars and tarot card decks front and center in New Age bookshops and yoga studios, a testament to the man who wanted to stick it to the man. Free sex, a love of profit this prophet would never be ashamed of, the rebel to inspire liberal rebellions: Osho was the ideal counterrevolutionary whose life few would ever literally follow. So much easier it is to post two sentences from one of his talks than investigate his actual life.

Still, it is those talks that survive, not his reported addiction to nitrous oxide and Valium; not his advice to euthanize children born deaf, dumb or blind; not his anti-Semitism and his feelings that gas chambers quickly bring you to God; not his announcement that homosexuals created AIDS and had fallen from dignity; not his cult's engineering of mass poisoning, attempted murder or land takeover, nor his badmouthing all-things American when returning to India in 1985. Osho died at age 58 of heart failure, sending his followers on witch hunts for the person sickening him with black magic. His yoga of rebellion and abundance is what loyalists cherish about the man today, even if his actual life was antithetical to pretty much every ethical code imaginable.

The gurus that have appeared on these shores mostly arrive with carefully tailored messages that appeal to American sensibilities. Never would the asceticism of meditation and breathing techniques attract legions of liberal middle- and upper-class followers, the very crowd they need to support their travels and exceedingly lavish lifestyles. Claiming to have risen above materialism is a fantastic way to acquire objects, as well as have sex with pretty young acolytes.

Joel and Diana Kramer, authors of the influential The Guru Papers: Masks of Authoritarian Power, are experts in the deception propagated by gurus. These men (and women, sometimes) are masters of exploiting character traits in would-be followers. One of the most important qualities is self-trust; without it, the Kramers write, people are ‘subject to easy manipulation.’

This power continues beyond the grave. Today his followers forget the man for the words and bolster the legacy of a lunatic. I won't argue that it's impossible to have some sort of insights while sniffing nitrous. I just wonder what those reading his calendar every morning are sniffing.