College, Liberalism, and the Destruction of Free Speech 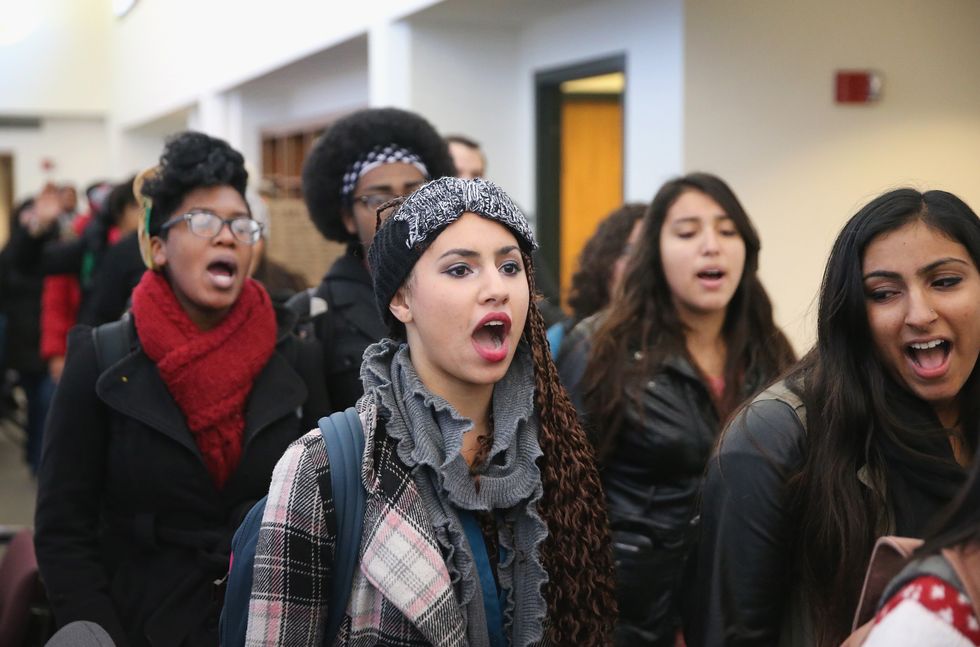 On Friday night my girlfriend and I headed to The Comedy Store in West Hollywood for a stellar line-up of 14 comedians. While we only stayed for the first half, at least three comics tackled one of the nation’s top recent headlines: the transformation of Bruce into Caitlyn Jenner, the larger story being identity politics in general.

What went down would most likely only work in a comedy club — Joe Rogan’s skit on the vampiric vulture Kardashians perched over Bruce in his sleep demonically nudging him toward femininity had the crowd rolling. The bigger question, one that Rogan and other comics have been addressing, is whether or not such observations work in a culture ready to publicly dismantle anyone over the slightest tweet. As Caitlin Flanagan reports, the answer is no.

Discussing an annual college-booking talent convention in Minneapolis, she writes:

They wanted comedy so thoroughly scrubbed of barb and aggression that if the most hypersensitive weirdo on campus mistakenly wandered into a performance, the words he would hear would fall on him like a soft rain, producing a gentle chuckle and encouraging him to toddle back to his dorm, tuck himself in, and commence a dreamless sleep — not text Mom and Dad that some monster had upset him with a joke.

The term "politically correct" cannot properly capture the scope of what’s occurring on campuses. In the same issue of The Atlantic, Greg Lukianoff and Jonathan Haidt investigate the coddling of the American mind. They argue that this trend toward being inoffensive in every possible circumstance is undermining intellectual and emotional growth, causing students to be unprepared for the post-university world.

Vindictive protectiveness ... prepares them poorly for professional life, which often demands intellectual engagement with people and ideas one might find uncongenial or wrong. The harm may be more immediate, too. A campus culture devoted to policing speech and punishing speakers is likely to engender patterns of thought that are surprisingly similar to those long identified by cognitive behavioral therapists as causes of depression and anxiety. The new protectiveness may be teaching students to think pathologically.

Recently entering my 40s, I’ve done my best not to look down on preceding generations; I remember how it felt on the way up. For example, as a longtime music journalist, I’ve avoided the phrase, ‘That’s not music!” so common when I grew up in love with hip-hop. Keeping up with the times is important not only in music, but also in ideas and cultural movements as well. We’re experiencing an unraveling of our political system, with two top candidates — Donald Trump and Bernie Sanders — representing opposing ends of our socio-economic spectrum. Understanding the balance between them, and therefore the rest of the candidates, requires nuanced thinking.

Yet as Lukianoff and Haidt report, 54 percent of college students have felt "overwhelming anxiety" in the last year, a number that is growing. Of course, this age is filled with social and personal pressures: seeing, probably for the first time, long-term potential in life; deeply experiencing love and heartbreak; associating with people from different ethnic backgrounds and life experiences. I learned more outside of the classroom than in at Rutgers in the mid-'90s. I suspect this is the case for most.

The same as the pathology cited above: I don’t want to see anything conflicting with my thought processes, for it will create too much anxiety. Much safer it is to be in a bubble of affirmation than a valley of uncertainty. Put another way: If I close my eyes, I can’t see you; therefore you do not exist.

But they do exist, and denying that strengthens our insecurities. Lukianoff and Haidt discuss trigger warnings, the surge of anxiety-producing chemicals — specifically, adrenaline, cortisol, and norepinephrine responding to the hypothalamus’s distress signal — preceding a panic attack. I know this well, having experience anxiety disorder since age 16.

The Fulton Street subway stop in Manhattan was one such trigger. Nine years ago, I passed out in an East Village restaurant at the onset of a panic attack, landing and waking up on some poor woman’s lap. A week later, nearly the same thing happened as I stepped onto a crowded car at that stop. For months, I couldn’t enter that station without feeling an impending attack; I walked the extra few blocks to city hall as a remedy.

This is no remedy, however; it’s avoidance. After a few months on Xanax, I was able to alleviate the symptoms through meditation and pranayama (yogic breathing techniques). Once things were under control, I began using Fulton again, with no ill effects. I had to confront my fear to continue with my life.

This extreme anxiety over someone not agreeing with you is not going to be cured by censoring those people or mobbing them online. Yet a fool persists in his follies, or so I’ve read. A group at the University of New Hampshire recently published a "Bias-Free Language Guide" to combat perceived discrimination. This guide is a window into the lengths students attempt to avoid conflict; it offers alternative verbiage, including:

Conservatives are often criticized for instilling religious fanaticism into their politics. Liberalism is bowing to the same god. Not that of any book, but the persistent insistence that "only my way is right." We splinter into groups, we unfriend, then we viciously attack anything remotely foreign — er, international. And the more voices standing to chatter, the fewer listening to anything beyond the stretch between their mouth and their ears.