In 1944, Erwin Schrödinger was already considered one of the greatest physicists of his generation, having discovered quantum physics’ most essential equation for describing atomic-level reality. But being intellectually restless, Schrödinger was ready to take on an even more difficult subject: the nature of organisms. What was it, he asked, that makes living systems different from non-living ones? The results of his thinking became one of the most essential books in the exciting and yet dangerous territory lying between physics and biology. That book’s question was also its title, “What Is Life?”. Its ideas are worth looking at now because more than 75 years after its publication, there are stunning new directions opening up toward an answer that both affirms and goes far beyond Schrödinger original vision. 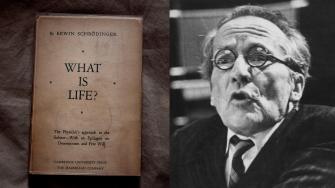 “What Is Life?” focused on the need to find the underlying physical principles that make living systems behave so differently. The hope had always been to find “laws of life” similar to what has been found for the fundamental laws of nature in other areas of physics. Looking at life from a physicists’ viewpoint, Schrödinger saw that one of its most compelling properties was the defeat of the omnipresent second law of thermodynamics. The second law states that the evolution of any physical system always tends toward states of maximum disorder (i.e., maximum entropy). But at the local level of an organism’s body, life manages to create and maintain staggering degrees of order. It beats back chaos, for a while at least. Thus, somehow, life manifested what Schrödinger called “negentropy” or negative entropy.

Being one of the founders of quantum mechanics, which is the science of the microworld, Schrödinger also thought deeply about life’s mechanics at the molecular level. Here, he was prescient, famously conjecturing that within cells there must reside an “aperiodic crystal” that held the information needed to transmit heritable traits from one generation to the next, allowing evolution to work. By aperiodic crystal, Schrödinger meant a molecule that had a stable, regular (i.e., repeatable) structure. If it was too regular and repeatable, however, you couldn’t use it to code a living organism’s structure. So ‘aperiodic’ meant ‘kinda, sorta repeating.’ A decade later, Francis Crick and James Watson credited this conjecture as their inspiration for using Rosalind Franklin’s X-ray data to discover DNA as the blueprint for life.

So yeah, “What Is Life?” was a really, really important book.

But as powerful as the book was, 75 years after its publication no foundational physical laws for life have ever been found. There is no F=ma or E=mc2 or even a Schrödinger’s equation for living systems. In spite of decades of searching, physicists have been unable to fully “reduce” the domains of the biologist (cells and organs and ecologies) into the domains of their own (atoms and energy and forces). In recent years, however, a new path forward has appeared that holds a unique promise. Rather than reduce biology to physics, the new direction would transform them both.

The focus on networks of information flows means its laws may be emergent. Life’s laws would not, therefore, be encoded in the laws of quarks.

What has become clear to scientists like Paul Davies, Sara Walker, and Lee Cronin, who are working across domains, is that understanding life requires putting a new actor onto the stage and letting it take the lead. That actor is information. Rather than focusing on the mechanics of life—meaning how the laws of atoms can be built up into a living organism—researchers are beginning to see that what really matters is how atoms and molecules become conduits for complex flows of information. Rather than just thinking about forces or energy exchanges between molecular parts, the key becomes seeing the whole; seeing how these parts can be seen as something more, something that only emerges when information becomes important to a system.

Why is this new perspective so radical? What’s most important is it’s not reductive. That means it does not reduce life to “just” the laws governing quarks or whatever quarks are made of. Without doubt, life is a physical system, but by creating and then harnessing intricate ballets of information flows, life does something amazing: it creates. The focus on networks of information flows means its laws may be emergent. Life’s laws would not, therefore, be encoded in the laws of quarks. Instead, they only emerge when enough matter is brought together in the right conditions for networks of information flows to become possible. That’s when novelty enters the universe.

The other radical consequence of seeing life as a dance of information that rides matter is that this emergence continues upwards in scale. Just as new rules appear for cells, so to do they appear for collections of cells in animals or plants. And then even newer rules appear higher up on the level of ecosystems made of many animals and plants. At even higher levels still, new laws and structures must emerge in the creation of social organizations via ants, tribes of chimps, and even global technological cultures.

We’ll be exploring this information flow perspective on life a lot more in the coming months, but for now it’s enough to just recognize one of the key starting points. Schrödinger’s “What Is Life?” was a remarkable first step because he saw information playing a central role in those aperiodic crystals. But what he could not have seen was how the focus on information flows would transform not just the answer but the very question that he posed. Because if you are going to focus on information, the next question you’ll have to address is who or what knows that information. We’ll leave that question for another time.

Finding aliens: Is there a ‘theory of everything’ for life? | Sara Walker | Big Thinkwww.youtube.com

Tags
biologyhumanitylifenaturephysicsscience
In this article
biologyhumanitylifenaturephysicsscience
Related
The Well
This is what the fourth dimension looks like
Left–Right, Back–Forth, Up–Down. What’s the fourth dimension?
▸
3 min
—
with
Brian Greene
The physics of entropy and the origin of life
How did complex systems emerge from chaos? Physicist Sean Carroll explains.
▸
6 min
—
with
Sean Carroll
Should you bring a kid into this world?
Climate change. War. Civil unrest. Is it responsible to have kids today?
▸
4 min
—
with
Ari Wallach
The Universe in 90 minutes: The Multiverse, time, free will, God, & more
Everything you ever wanted to know about the Universe, explained by physicist Sean Carroll.
▸
1:33:47 min
—
with
Sean Carroll
13.8
Information is the frontier for the study of life
Life is the only physical system that actively uses information.
Up Next
Life
Less-advanced alien civilizations may be nearby — but we’re not looking for them
Humans are more likely to have “first contact” with an advanced alien civilization, according to a recent NASA-funded paper.