Let’s face it: to think that the universe has a history that started with a kind of birthday some 13.8 billion years ago is weird. It resonates with many religious narratives that posit that the cosmos was created by divine intervention, although science has nothing to say about that.

What happened before time began?

If everything that happens can be attributed to a cause, what caused the universe? To deal with the very tough question of the First Cause, religious creation myths use what cultural anthropologists sometimes call a “Positive Being,” a supernatural entity. Since time itself had a beginning at some point in the distant past, that First Cause had to be special: it had to be an uncaused cause, a cause that just happened, with nothing preceding it.

Attributing the beginning of everything to the Big Bang begs the question, “What happened before that?” That’s a different question when we are dealing with eternal gods, as for them, timelessness is not an issue. They exist outside of time, but we don’t. For us, there is no “before” time. Thus, if you ask what was going on before the Big Bang, the question is somewhat meaningless, even if we need it to make sense. Stephen Hawking once equated it with asking, “What’s north of the North Pole?” Or, the way I like to phrase it, “Who were you before you were born?”

To ask from science to “explain” the First Cause is to ask science to explain its own structure. It’s to ask for a scientific model that uses no precedents, no previous concepts to operate. And science can’t do this, just as you can’t think without a brain.

Saint Augustine posited that time and space emerged with creation. For him, it was an act of God, of course. But for science?

Scientifically, we try to figure out the way the universe was in its adolescence and infancy by going backward in time, trying to reconstruct what was happening. Somewhat like paleontologists, we identify “fossils” — material remnants of long-ago days — and use them to learn about the different physics that was prevalent then.

The premise is that we are confident that the universe is expanding now and has been for billions of years. “Expansion” here means that the distances between galaxies are increasing; galaxies are receding from one another at a rate that depends on what was inside the universe at different eras, that is, the kinds of stuff that fill up space.

The “Big Bang” was not an explosion

When we mention the Big Bang and expansion, it’s hard not to think about an explosion that started everything. Especially since we call it the “Big Bang.” But that’s the wrong way to think about it. Galaxies move away from one another because they are literally carried by the stretch of space itself. Like an elastic fabric, space stretches out and the galaxies are carried along, like corks floating down a river. So, galaxies are not like pieces of shrapnel flying away from a central explosion. There is no central explosion. The universe expands in all directions and is perfectly democratic: every point is equally important. Someone in a faraway galaxy would see other galaxies moving away just like we do.

(Side note: For galaxies that are close enough to us, there are deviations from this cosmic flow, what’s called “local motion.” This is due to gravity, The Andromeda galaxy is moving toward us, for example.)

Going back in time 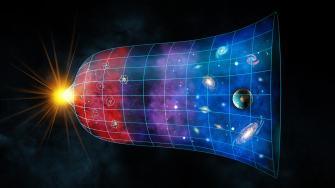 Playing the cosmic movie backward, we see matter getting squeezed more and more into a shrinking volume of space. Temperature rises, pressure rises, things break apart. Molecules get broken down into atoms, atoms into nuclei and electrons, atomic nuclei into protons and neutrons, and then protons and neutrons into their constituent quarks. This progressive dismantling of matter into its most basic constituents happens as the clock ticks backward toward the “bang” itself.

For example, hydrogen atoms dissociate at about 400,000 years after the Big Bang, atomic nuclei at about one minute, and protons and neutrons at about one-hundredth of a second. How do we know? We have found the radiation left over from when the first atoms formed (the cosmic microwave background radiation) and discovered how the first light atomic nuclei were made when the universe was merely a few minutes old. These are the cosmic fossils that show us the way backward.

Currently, our experiments can simulate conditions that happened when the universe was roughly one trillionth of a second old. That seems like a ridiculously small number for us, but for a photon — a particle of light — it’s a long time, allowing it to travel the diameter of a proton a trillion times. When talking about the early universe, we must let go of our human standards and intuitions of time.

We want to keep going back as close to t = 0 as possible, of course. But eventually we hit a wall of ignorance, and all we can do is extrapolate our current theories, hoping that they will give us some hints of what was going on much earlier, at energies and temperatures we cannot test in the lab. One thing we do know for certain, that really close to t = 0, our current theory describing the properties of space and time, Einstein’s general theory of relativity, breaks down.

This is the realm of quantum mechanics, where distances are so tiny that we must rethink space not as a continuous sheet but as a granular environment. Unfortunately, we don’t have a good theory to describe this granularity of space or the physics of gravity at the quantum scale (known as quantum gravity). There are candidates, of course, like superstring theory and loop quantum gravity. But currently there is no evidence pointing toward either of the two as a viable description of physics.

Still, our curiosity insists on pushing the boundaries toward t = 0. What can we say? In the 1980s, James Hartle and Stephen Hawking, Alex Vilenkin, and Andrei Linde separately came up with three models of quantum cosmology, where the whole universe is treated like an atom, with an equation similar to the one used in quantum mechanics. In this equation, the universe would be a wave of probability that essentially links a quantum realm with no time to a classical one with time — i.e., the universe we inhabit, now expanding. The transition from quantum to classical would be the literal emergence of the cosmos, what we call the Big Bang being an uncaused quantum fluctuation as random as radioactive decay: from no time to time.

If we assume that one of these simple models is correct, would that be the scientific explanation for the First Cause? Could we just do away with the need for a cause altogether using the probabilities of quantum physics?

Unfortunately, not. Sure, such a model would be an amazing intellectual feat. It would constitute a tremendous advance in understanding the origin of all things. But it’s not good enough. Science can’t happen in a vacuum. It needs a conceptual framework to operate, things like space, time, matter, energy, calculus, and conservation laws of quantities like energy and momentum. One can’t build a skyscraper out of ideas, and one can’t build models without concepts and laws. To ask from science to “explain” the First Cause is to ask science to explain its own structure. It’s to ask for a scientific model that uses no precedents, no previous concepts to operate. And science can’t do this, just as you can’t think without a brain.

The mystery of the First Cause remains. You can choose religious faith as an answer, or you can choose to believe science will conquer it all. But you can also, like the Greek Skeptic Pyrrho, embrace the limits of our reach into the unknowable with humility, celebrating what we have accomplished and will surely keep on accomplishing, without the need to know all and understand all. It’s okay to be left wondering.

Curiosity without mystery is blind, and mystery without curiosity is lame.

The big-picture physics is simple – let gravity do its job.
13.8

Mathematically, it is a monster, but we can understand it in plain English.
Up Next
The Present

According to this research, eight percent of Americans always refuse vaccines. Why?