There’s something wrong with the universe. Okay, it’s not the universe that’s the problem; it’s our understanding of the universe. The problem lies with cosmology—the branch of science that studies cosmic evolution—and it’s only getting worse. But that may, or may not, turn out to be a good thing.

Talk to an astronomer or a physicist about the state of the art in understanding the universe and they’ll tell you we’ve entered the “Precision Age” of cosmology. The data relevant to cosmic evolution have gotten so good we know all the relevant parameters – things like the universe’s age and average density – down to a few decimal places. That’s a pretty impressive achievement.

One of the most important of these cosmic parameters is what’s known as the Hubble constant (cosmologists write it as Ho). Modern cosmology tells us the universe has been expanding since its beginning in the Big Bang. The Hubble constant specifies the rate of that expansion. It’s also related to the age of the universe. Larger values of Ho mean a younger universe. Smaller values of Ho mean an older universe.

A conflict between different ways of measuring [the Hubble constant] is now making big news in cosmology, and no one is sure what’s the right next step.

Back when Edwin Hubble first discovered that the universe was expanding, his crude data gave Ho = 500 (we’ll ignore the units). This value was so large it gave an age of the universe that was shorter than the age of the sun or the earth. Better measurements soon gave much lower values of Ho, resolving this conflict. But the idea of conflicts with measured values of Ho didn’t go away. A conflict between different ways of measuring Ho is now making big news in cosmology, and no one is sure what’s the right next step.

There are basically two modern ways to measure the Hubble constant. The first is based on looking at what cosmologists call the “late” universe. Astronomers try to make direct measurements of how fast distant objects are moving away from us (i.e., their redshift). There are two parts to these kinds of observations. First, astronomers need an accurate measurement of an object’s distance. Then they need to obtain an accurate measurement of its redshift. Using supernovae as “standard candles” for getting distances to far away galaxies, this late universe method gives a value of the Hubble constant of Ho = 74.03.

The other method relies on data from the “early” universe, i.e., right after the Big Bang. Microwave radiation emitted by matter about 300,000 years after the cosmic beginning provides astronomers with a rich source of early universe measurements. The best data from this cosmic microwave background comes from the Planck satellite launched back in 2009. And the best analysis of the Planck data yields Ho = 67.40, which is clearly not the same value as supernova data. Hence the two methods produce conflicting results. Not knowing which value is right, we can’t pin down other properties like, for example, the exact age of the universe.

The conflict between the two approaches is itself not news. People have been playing this game for a while, and during all that time, there was always some difference between the early and late universe approaches. But everyone thought it was just a matter of time until new and better data resolved the conflict. Eventually, it was believed, the final value would lie somewhere between Ho = 74.03 and Ho = 67.40. But things haven’t worked out that way and that is news. 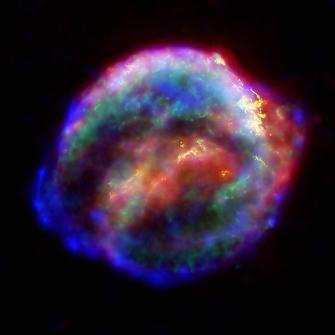 Over the last few years, measurements of the late universe approach have been getting better and better. This means the inherent “errors” or “uncertainty” in this value of Ho are getting so small there’s no chance for a reconciliation with the early universe methods. The gold standard for a measurement is when it achieves the “5 sigma” level, which basically means the confidence in the measured value reaches astronomical (no pun intended) levels. With measurements announced in 2019, the late universe value of Ho was close, or had crossed, the 5 sigma threshold.

So, if the late universe measurement is solid, then what’s going on? What are cosmologists missing? The most exciting possibility is that the conflict is not about errors in measurement or analysis but instead point us towards the holy grail of new physics.

To make their early universe measurements of Ho, cosmologists must heavily rely on their dominant cosmological model. This is something called the “Lambda Cold Dark Matter” model or Lambda-CDM. It is based on the universe being made mainly of dark energy (lambda) and a slow moving form of dark matter. This model (or theory) makes predictions that have been very, very well tested. In other words, it works. But the tension between the two methods of determining Ho has some cosmological theorists ready to make changes to Lambda-CDM that could have big consequences for our understanding of the universe. These changes range from just fiddling with the nature of dark energy all the way up to changing Einstein’s theory of relativity.

The problem is Lambda-CDM works so well, in so many ways, that it’s not something one throws out lightly. Any change to any of its components will have consequences that can mess up the places that it already does work in explaining what we see in the cosmos. What all this means is that the tension in Hubble’s constant offers us a lesson in how science progresses. Cosmologists have a paradigm they love and it mostly works. But along comes this problem and, as philosopher of science Thomas Kuhn pointed out, there are typical ways scientists will respond to the problem. At first everyone thinks the problem will go away. But then it doesn’t. So what should they do? They could tinker with the old theory in a way that looks jury-rigged. They could abandon the old theory entirely at enormous cost. They could also keep poking around and hope things work themselves out. So what should they do? What would you do?

Dr. Sara Walker is an astrobiologist and theoretical physicist, who is questioning the very nature of life and how we’re attempting to find it elsewhere.
▸
6 min
—
with
Sara Walker
Up Next
Strange Maps

The popular game has a backstory rife with segregation, inequality, intellectual theft, and outlandish political theories.