Today’s words of wisdom come from African-American labor leader A. Philip Randolph (1889-1979). Randolph was a major leader in the 1960s civil rights movement and the head of the 1963 March on Washington that featured Martin Luther King Jr.’s famous “I Have a Dream” speech. He had previously led the March on Washington Movement during the 1940s. Randolph is most famous for organizing and leading the Brotherhood of Sleeping Car Porters, the first predominantly African-American labor union.

As a keen social observer, Randolph tasked himself with analyzing problems and suggesting solution-based approaches. Below, he describes the process by which segregation and other forms of social separation can lead to a chain reaction of emotions leading to irrational hatred. Think about how Randolph’s words apply to our current world.

Self-segregation is just as much a catalyst for distrust as forced separation… and we see this idea at work in our society day after day after day. 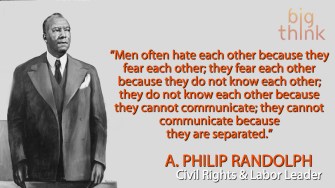 Below, Dr. Michael Lindsey delves into the topic of mental illness in the African-American community. The mental health researcher acknowledges how traumatic experiences dating back to slavery still resonate today.

Roughly half the world population, including in America, has insufficient levels of vitamin D. UV irradiated mushrooms can help.
Up Next
Culture & Religion

Open borders would lead to a massive wave of immigration and probably the collapse of American constitutional democracy… though one economist says that’s not a bad thing.