Nathan Wolfe is a biology professor at Stanford University and Director of Global Viral Forecasting Initiative, a pandemic early warning system which monitors the spillover of new infectious agents from[…]
Go to Profile 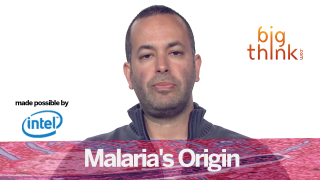 Where Malaria Came From

The epidemiologist traced one of the most important public health crises of our time back to chimpanzees.

Question: How did you discover the origins of malaria?

Nathan Wolfe: Malaria has a huge impact on the human population. It affects people throughout the tropical world. This is a devastating disease and while there are treatments to it, diagnosis is difficult, there is an adequate means for diagnosis and treatment is not universally available, so people are dying, it’s impacting livelihoods throughout the world, this is one of our most important public health crises of our time, really, is malaria.

And so basically what we did, along with colleagues at the Robert Caulk Institute and at University of Massachusetts Amherst, is we went out and we actually looked in chimpanzees and we tried to find evidence of this parasite and we were surprised that whether it was in Kotdwar, or in Cameroon, we were actually able to find chimpanzees who were infected with this parasite.

Question: Was there a "Eureka!" moment?

Nathan Wolfe: For me, the sort of, the real ah-ha moment was recognizing, wow, these parasites are out there in chimpanzees. One of the things I had started to convince myself of was that perhaps, you know, because I assumed people would be out there looking for these things, so if they hadn’t found them, I figured they must be very rare, and the answer was really, people just were not out there looking for them. And I think that was one of the sort of ah-ha moments for me.

But the other thing to point out is that this kind of science is hugely collaborative. So the number of ah-ha moments and sort of eureka moments in the science, there was a bunch of them. So there was that one, there was also the work in Dr. Steve Rich’s lab at University of Massachusetts Amherst, where he actually saw sequence from these sorts of things and put them together and realized, lo and behold, all of the diversity of humanity is held within the sort of broader diversity of these parasites in chimpanzees. And that really was like, we sat down at a table and looked at this data, and we were like, you know what? There’s no way to interpret this other than really being the movement of a chimpanzee parasite into humans. And of course, you know, we sort of looked at each other and, and it was a pretty incredible moment.

Question: When did you first want to study the relationship between humans and animals?

Nathan Wolfe: As a young kid, I remember vividly, and I must have been probably four or five years old, and I was watching a National Geographic documentary with my father on work that was done with wild gorillas in central Africa. And that’s sort of the most of my recollection that I have, but I remember just being sort of incredibly fascinated with the idea that these, you know, that these animals were some of our closest living relatives. And I think that was at least for me, the first, sort of sense I had at the sort of wonder that we have, the potential to have with scientific inquiry to change the way that we think about the world and to grasp insights that sort of afterwards appear somewhat obvious but beforehand are, you know, are really quite opaque. And basically, how that information can change the way that we think about ourselves and ultimately empower us.

Question: How can we improve math and science education?

Nathan Wolfe: By studying these things and obviously it’s important to study them, I don’t think you get a good sense of what it is like to actually be a scientist. And so, maybe part of it is increasing the interface between students of science and actual scientists. Because I think for many of us, we feel very fortunate to be in this endeavor where, despite all of the complexities and difficulties and not enough funding and heavy competition and all these sorts of things, that really at the end of the day, we get to go out and ask questions about the nature of reality, whether it be life or the universe or soil, or whatever it is, we get to ask these questions and if we get lucky, we get to find some answers. And there’s a certain thrill to that, which is, I think among the more intense thrills that we’re capable of as human beings.

And I think that all of that, that sort of, the thrilling, exciting element of it, is somehow missing. I think actually exposing students to real science might radically change the courses of their careers and increase the number of people that are out there trying to do science.

Question: How can we get young people interested in science careers?

Nathan Wolfe: This is really about interacting with scientists. It’s challenging, you know, to be a scientist. Many scientists are not compensated at the levels that they should be compensated. Funding is difficult, often we enter science and we, we basically end up doing things that are different than what we originally envisioned. But at the core of it, most practicing scientists out there have something that they really, really love about what they do and their capacity to answer real questions about life and about the world. And I think sort of exposure to that excitement and an understanding of sort of what it means to be a scientist and some of the sort of great elements about it might very well change the way that, you know, that people think about science and increase the number of people that would go, go into science.
Recorded on April 26, 2010
Up Next