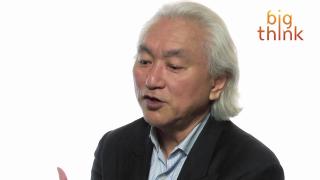 What’s the Fate of the Universe? It’s in the Dark Matter

Dr. Michio Kaku: In cosmology we believe that the universe started off in a big bang 13.7 billion years ago.  All alternatives have been pretty much ruled out.  Steady state theories, other alternatives have been ruled out.  However, how will the universe end?  We have several possibilities.  One possibility is a big crunch when the universe squashes together in a gigantic ball of flame and maybe bangs once again.  Another possibility is the big freeze, that the universe expands and just keeps on going and we're all going to freeze to death and we're all going to die when the universe reaches near absolute zero.  Then there is something called the big rip where the universe goes into an exponential expansion and expands so rapidly that the distant galaxies can no longer be seen because they travel faster than the speed of light, that even the distant galaxies break the light barrier, and that's called the big rip, meaning that the night sky will be totally black except for some of the nearby stars.

Now why is that important?  Because the amount of matter and energy in the universe determines the rate of expansion.  We now know there is a lot more dark energy than we previously thought.  Therefore, the universe is undergoing an inflationary exponential expansion.  It is in a runaway mode, but here is the catch: we don't know how long that runaway mode is going to last.  Some people say that it's temporary.  We're in this huge expansion right now, exponential expansion, but it's going to reverse itself.  Instead of a red shift, we'll have a blue shift as the universe collapses.  At the present time we simply don't know.  Why don't we know?  Because we don't know what dark energy is.  In fact, if you were to try to write down a theory of dark energy, your number would not correspond to the data by a mismatch of 10 to the 120.  That is the largest mismatch in the history of science.  There is no mismatch bigger than 10 to the 120.  So this is a mystery.  Until we solve the mystery of dark energy, we do not know the ultimate fate of the universe.

My personal thoughts are that perhaps we will continue with this exponential expansion and perhaps go into a big rip mode and at that point all intelligent life in the universe will die.  All the tears and all the struggles and all the heartbreak of humanity since we rose from the swamp, it's all for nothing.  Why should you bother to wake up tomorrow knowing that we're all going to die billions and billions of years from now when the universe turns to absolute zero, when the stars blink out, when we have nothing but neutron stars and black holes?  What does it all mean anyway, if we're all going to die in a big rip?

Well, my personal attitude is that when the universe is about to die, why not leave the universe?  Trillions of years from now, we will have the ability to bend space and time into a pretzel.  We'll be able to tie space into knots.  We'll be what is called a type three, maybe a type four civilization, a galactic civilization with the capability of harnessing galactic power.  At that point, when the universe becomes so cold that all life is freezing to death, I say let us escape the universe, go into hyperspace and go to another universe.