John Horgan is the author of The End of War and winner of the 2005 Templeton-Cambridge Journalism Fellowship in Science and Religion.  In addition to being a science journalist, Horgan[…]
Go to Profile 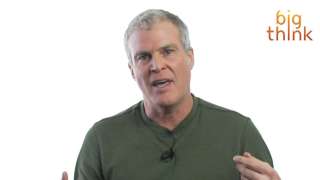 John Horgan: There are a lot of very prominent scientists--Richard Wrangham, an anthropologist at Harvard is one--who have made the case that war is hundreds of thousands or even millions of years old.  Wrangham is somebody who studies chimpanzees and he has found examples of chimpanzees forming groups and raiding other chimpanzee troops and killing one or two members of the other troop.  So, based on that evidence, and also the evidence that you see among some simple pre-state tribal societies who also engage in lethal warfare, from that, Wrangham makes the case that our ancestors have been fighting forever, basically.

The problem is, first of all, that there are very few cases of lethal chimpanzee fighting.  On average, if a scientist watches a troop for seven years he may see one case of this sort of fighting.  There are some anthropologists who think that these lethal raids are stemming from human encroachment on chimpanzee habitat.  It might actually be a recent cultural behavior among chimpanzees.

Another problem with the idea that war is really ancient is that we only have good evidence of fighting among humans going back about 10 or 12,000 years, so yes, the simplest human societies--nomadic hunter, gatherers--do fight.  That’s clear cut.  It had been thought once that war only emerged with more complex societies.  Now we know the simplest societies do fight, but they only really started fighting, as I said, about 10 to 12,000 years ago.  There is evidence of settlements and of fairly complex societies before that with no evidence of warfare.  So I think it’s really important for people to know this basic fact, that war is actually quite a recent behavior.

One of the reasons that people tell me we will always fight wars is because it’s in our nature.  It’s innate male aggression to fight and so forth.  I think that’s easily refuted just because war is so recent and there is this enormous variability between cultures.  So the second most common reason that people cite for warfare being a permanent part of the human condition is that there are always too many people for the available resources, and so you inevitably get this kind of Malthusian situation where people are struggling over land or water or oil, these sorts of things.

Now the problem is that if you do a statistical analysis and you look at armed conflicts through history there are some conflicts where clearly there was a struggle over resources.  Economics played a very important role, but there are other wars that didn’t show resource scarcity as a really important factor.  World War I is a really good example.  World War I was fought by the wealthiest, more powerful states in the world and it really had to do more with national pride and these kinds of nationalistic, cultural factors than the simple struggle over resources.

Also the theory that resource scarcity leads to war is contradicted by studies of some simple societies.  So there is a tribal society in the Amazon called the Yanomamo.  It’s very well known.  It was discovered by a—and first studied by an anthropologist named Napoleon Chagnon beginning in the 1960s, and Chagnon wrote this book that became a huge bestseller called The Violent People that was published in the late 60s right during the Vietnam War, and the  Yanomamo fight constantly and viciously.  They have these little villages that go out on raiding parties and spear each other and shoot arrows at each other and then race back to their villages and of course that leads to a feud.  What Chagnon has found is that there is an inverse correlation between the population density because the Yanomamo are spread over a very wide region of the Amazon.  So he has gone to different places and found that the more densely populated these tribal people are and the less food they have available the less war there is.

So it’s exactly the opposite of what you would expect.  The really sparsely populated regions where there’s plenty of game to go around—those, according to Chagnon, tend to be the most violent regions.  So Chagnon thinks that, if anything, it’s because the more protein you have, the more well fed you are, the more energy you have for this kind of sport that the Yanomamo see warfare as and the more they’re struggling just to feed themselves, the less energy they have for warfare.