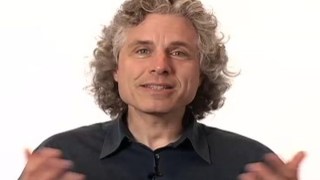 The experimental psychologist examines himself.

Question: Where are you from and how did that shape you?

Pinker: I grew up in a culture that was very verbal and argumentative.  We had a saying: “Ten Jews, 11 opinions”.   That was part of the culture.  There were constant, good-natured arguments around the table with friends, and relatives, and parents.  But I think in addition, the 1960s seemed like a time when everything was up for grabs.  You could ask questions like, “Could we have a society without money?  Do you really need the government?  Will cash be obsolete?  Could we outlaw war?”  Questions that seemed to hark back to the enlightenment when you had thinkers trying to rationalize the very basis for society.  In the ‘60s it seemed to be okay to ask those questions.  Again, I wasn’t a part of the ‘60s movement.  I was too young; but it filtered down to my circles because we had older brothers, and you read about it in the papers and saw it on TV.  So it was just a time in which everything seemed up for grabs.

Question: How did your parents influence you?

Pinker:    People often asked me how my parents influenced me, and I can’t give a neutral answer to that because I very much influence by the saying by Hans Isaac that the biggest influence that parents have on their children is at the moment of conception.  I think that people often attribute far too much to parental upbringing.  There’s a fair amount of data from my field not widely know that suggests that the effect of parents in shaping intellect and personality might even be overrated.  You see this in children of immigrants.  Even if their parents never acquired the language and culture of the adopted country, as long as the kids who were immersed in a peer group, they end up as fully competent citizens – something indeed that happened to my own father, the children of immigrants who are culturally, utterly inept; never managed to speak the language.  In the case of my grandmother, they were constantly at sea in figuring out the culture, and my father grew up highly successful.  So if you would ask the question of him, “How did your parents shape you?” he would have laughed.  He shaped himself.  I don’t want to deny credit to my parents who brought me up in a rich and stimulating household, but I think I’d be kind of inventing a novelistic autobiography, which is what I think what most people do when asked, “How did your parents influence you?”  That having been said, it was a house with books, with discussion, with arguments, with people coming in and challenging us with interesting ideas.  So I wouldn’t have traded it for anything, but the scientist in me says that . . . warns against my tendency to tell a story, and how to explain who I am today.

Question: Who was your greatest influence when you were young?

Pinker:    I think it’s more being immersed in the world of ideas in general.  One thing that my parents did that did influence me was buy an encyclopedia, which I read almost cover to cover.  They also subscribed to many magazines which I would devour.  I think most people, even though it makes a good novelistic story to hold up a role model, or a mentor, or an influence, I would have to say that it was just immersing myself in a huge sea of ideas that led me to my current worldview.  There were some things that were influential at different parts of my adult professional career.  I was certainly influenced by Noam Chomsky, my former colleague at MIT; and by a number of the founders of the so-called Cognitive Revolution in the 1950s – George Miller, Gerald Brunner, Roger Brown who was one of my graduate school mentors; Herb Simon and Allen Newell, Marvin Minskey – the people who first came up with the idea that thinking is a form of information processing, or computation, almost allowing us to get a grasp on one aspect of the mind-body problem.  How could a physical device result in intelligence?  Probably the other major influence was from evolutionary biology from the founders of the revolution and evolutionary biology that took place in the 1960s.  People like Robert _______, George Williams, John Maynard Smith, William Hamilton, who rethought the nature of evolution, and how complex adaptations could arise from the process of selection among replicators, namely genes.

Question: Why do people romanticize the influence of a parent or mentor?

Pinker:    It’s natural to credit who you are with your parents.  It seems like an act of decency or gratitude.  In fact I often have to apologize to my parents saying I really do appreciate everything you did to me. It’s just that the scientific data leads me to think that parents don’t shape children as much as most people think. And that attitude is . . .  I should give them credit for their attitude, which is, “We wouldn’t want you to say anything but what you believe based on the best scientific evidence that you take seriously.  So don’t try to fashion your answer to flatter us.”  I think that is a sign of the kind of people that they are.  They are, I think, as interested in ideas and in providing good reasons for your ideas as I am.  I don’t know whether I inherited that, whether they fostered it in me, but they deserve full credit for that even if perhaps by the standards of their friends I seem to be denying them credit in talking about theories of the shaping of personality.

Question: What is the best advice you ever received?

Pinker:    I remember my mentor Roger Brown once saying . . .  He was one of the founders of the study of child language acquisition which is what a lot of my own research has been focused on.  And he said, “You know, you never really understand what children are doing.”  This was a bit of an ironic comment because, of course, that is what he spent his life doing and what I’ve dedicated most of my life to doing.  But it does offer a little bit of humility and a feeling that if you don’t quite understand everything that’s in your data you shouldn’t feel too bad about it.  It’s extraordinarily complex.  We’re fortunate to understand what we do understand.  I’ve gotten advice on writing from an early editor of mine who said, “When you try to present science to a wide audience, don’t feel that you’re writing for truck drivers or chicken pluckers.  They probably realistically won’t buy your book.  And if you try to aim at everyone, you’ll end up talking down or condescending.  Write for your college roommate, someone who you respect as being as smart as you. They went into a different line of work.  They’re joining the conversation late.  They need to be brought up to speed; but assume that your audience is as intellectually engaged and as smart as you are.”  That was terrific advice both for teaching, and for writing and speaking for a wide audience.