Jill Tarter is Director of the Center for SETI Research at the SETI Institute in Mountain View, California. She served as Project Scientist for NASA’s SETI program, the High Resolution[…]
Go to Profile 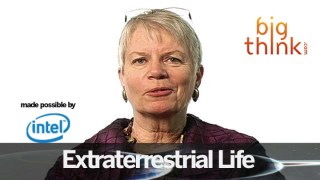 The Search for Extraterrestrial Intelligence

Jill Tarter is trying to find an answer to a question people have asked forever: is there life on other planets?

Question: How did you get interested in the question of life on other planets?

Jill Tarter: I was a graduate student for many, many, many years and as I was about to go off and do a post-doctoral fellowship... an astronomer at Berkeley had a great idea. He had been taking note of the work that had been going on at NASA Ames and their interest in searching for extraterrestrial intelligence, and the early papers that suggested that radio telescopes were good tools and he said, "Oh gee, UC Berkeley has a radio telescope." And he understood enough physics to know that it's possible to take some of the signal from a radio telescope and amplify it and do different things with it and you don’t hurt the primary observer. So he thought, well we can just steal a little of the signal and we can look for engineered signals rather than astrophysical signals. It was a really clever idea of a way to get a lot of telescope time inexpensively. But of course, he had no money and so he went scrounging and somebody gave him this old computer and he said, “Well what do I do with that?” And they said, “Well you know Jill used to work on that and she is still around. Maybe she can help you.”

So he came to my office and he gave me something called the “Cyclops Report." That was an engineering study done at Stanford and NASA Ames and it talked about how you could use radio telescopes to search for extraterrestrial intelligence and what I got out of that was this "aha" moment. I said, you know, for thousands and thousands of years people have been asking the priests, the philosophers, whoever they thought was wise, what we should believe about whether there is life elsewhere. And now, in the middle of the 20th century suddenly we had some tools and we could do an experiment to try and answer the question. And I thought "Oh wow, I’m alive at just this moment in history. I have this opportunity to try and answer a question that people have asked forever and how could you not?" So yes, I remembered how to program that computer and I began working with this group and I got hooked and I’m still hooked.

Question: Did you wonder about extraterrestrial beings as a child?

Jill Tarter: Well when I was growing up television was very, very new and there used to be these Saturday morning cartoon shows for kids. There was also "Flash Gordon," and I watched Flash Gordon zipping through space with these ray guns and things and I thought that was spectacular. And I suspect that had a lot to do with just setting up a worldview for me so that later when I walked on the beach with my father and... it was dark, it was the Florida Keys, the sky was very dark and my father taught me about the constellations and I looked up. I don’t think there was ever a time when I didn’t just assume that those stars up there were someone else's suns, and that on some other beach, on some other planet there would be a small creature walking along with their parent and gazing at our sun in their night sky, and wondering whether we were here just as I was assuming that they were there. So, from an early time I had always thought about the fact that it would be possible to have life on planets around other stars.

Question: Do you think we will discover extraterrestrial life in the next 50 years?

Jill Tarter: Detection of an extraterrestrial signal indicating someone else could happen tomorrow; it could happen never. I mean we actually don’t know the answer to the question of whether we’re alone. We could be the only intelligent species in our galaxy, if not the universe. That is the question we’re trying to answer. Certainly the exponential increase in our technical capabilities is breathtaking. To try and predict what it is going to be 50 years from now is pretty darn near impossible. In fact, there are probably technologies that we haven’t yet invented, which actually might make a lot of sense for interstellar communication. So I guess the best plan there is to stick around long enough so that we get smart enough to invent that and then start using it in our SETI searches, along with keeping the radio and the optical going because they’re not bad ideas either.
Recorded on June 3, 2010
Interviewed by Jessica Liebman
Up Next