Marion Nestle is a consumer activist, nutritionist, and academic who specializes in the politics of food and dietary choice. Nestle received her BA, PhD, and MPH from the University of[…]
Go to Profile 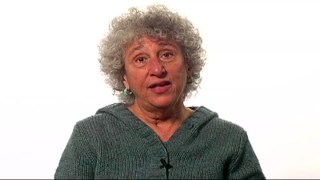 There is a wealth of evidence showing that salt helps to generate high blood pressure, which in turn spurs myriad other chronic diseases; yet salt is nearly inescapable in the American diet. Is it time for the government to step in?

Question: Are Americans eating too much salt?

Marion Nestle: There’s way too much salt in American diets. Even people who aren’t susceptible to hypertension are getting too much salt, and there’s so much evidence that salt is related to high blood pressure. And high blood pressure is related to a whole host of chronic diseases; coronary heart disease, stroke, and so forth. It would be really terrific if we could cut down on our salt intake. We don’t need nearly as much as we are eating. And the real problem with it is that nearly 80% of the salt in American diets is there before anybody has any choice about it. It’s either in the processed food that we buy in the store, or it’s in the restaurant food, or the food, the prepared meals that are outside. The amount that’s added to the table is minimal to what’s already there. So what the means is that for somebody who wants to cut down on salt, you can’t eat processed foods, and you can’t eat restaurant foods.

We need to do something about that at the policy level so that restaurants and processed foods will cut down on the salt and make it easier for people to eat less.

Question: Are there any policies being enacted that could change this?

Marion Nestle: There’s a lot going on in government right now trying to work with food manufacturers and restaurants to cut down. New York City, for example, has a very quiet, under the table initiative to try to get the salt. And you see, the problem with salt is that if you’re eating a lot of it, you don’t notice the taste of it. You only notice the taste of it if you’re not eating a lot of it. And so, if everybody in the population was eating less, then the foods that are out there would taste terribly salty. But unless all of the food manufacturers and all of the restaurants cut down at the same time, then nobody wants to go first. That’s what the problem is. That’s why you need government intervention in this, to try to make it easier for people to cut down on their salt intake because even if you want to, it’s really hard.