Peter Warren Singer is Senior Fellow and Director of the 21st Century Defense Initiative at the Brookings Institution. He is the youngest scholar named Senior Fellow in Brookings' 90-year history.[…]
Go to Profile 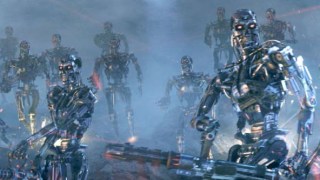 The Future of Robotic Warfare

Robots already play a major role in modern warfare in the form of airborne drones, but as artificial intelligence becomes more sophisticated, will we have to worry about our own soldiers turning into the enemy?

Big Think: How worried should we be about robots commanding themselves in war?

P.W. Singer:  I don’t think we’re yet to the point that you have to, you know, keep an eye on your [own back] for, you know, a sneak ambush or something like that.  You know, like, death by dust inhalation or something.  But, I do think there are some issues that we need to pay attention to.  And so I actually went around and interviewed all these various robotic scientists and said, you know, is this something that is a possibility?  Let’s take this seriously.

And there are basically three answers.  One was, no, that’s silly.  It will not happen.  These are systems, for example, that don’t have a survival instinct, and in awe of science fiction the story is always that the machine gets scared and lashes out at the humans first.  Well, guess what, we’re building these machines specifically to die in war so why would they care.

The second answer is don’t worry about it.  The software, you know, will probably crash right at the moment that they’re, you know, deciding to revolt.  You know, they’ll try and load an [S4] document and boom, just like what’s happening to all of us.

The third answer, though, is a fascinating one is that there is a pretty substantial minority and it has a lot of distinguished people in it who do think it’s a possibility someday.  One Pentagon scientist, for example, said to me, “You know, I’m probably working on something that’s either going to kill or enslave my grandkids, but, you know, it’s really cool stuff, so why stop.”

Right now, we have 5,000 of these drones in the air, 12,000 on the ground.  If we take the growth trajectory up, this one Air Force lieutenant general put it, we’re reaching into the tens of thousands.  This is the future of war.  But, there is another side of the future of war that is the enemy has a vote and so you have these continual global insurgencies.  And that’s these two trends coming together, both the unmanning of war but also the flattening of war that is it’s becoming a game in which not just stage play.

And the challenge for all of us is that both robotics and insurgencies and terrorism are things that, one, we don’t understand very well, and two, we really haven’t yet figured it out how to deal with them, and you have these two trends coming together and that’s a challenge for us all.

A Day in the Life of a Drone Operator