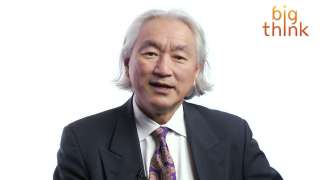 Michio Kaku: I believe in solar power, but there are problems that we have to face, and one of them is low efficiency.

Michio Kaku: Some people think that the time is right for the solar revolution, that one day solar power will replace oil and we’ll all live in a world that is clean and renewable.  Well, not so fast.  I believe in solar power.  However, there are problems that we have to face, and one of them is low efficiency.  The other one is lack of a storage facility like a battery.  That’s’ the weak link.  We simply don’t have the efficiency of solar cells necessary to make it economical and competitive today, and the ability to store the energy for long periods of time when the sun is dark, when there are clouds and your solar panels don’t work.

So my point of view is this: I think in the coming decade, as oil prices start to rise and as the cost of wind and solar and renewables start to drop, the two currents will probably cross in maybe ten years.  So in ten years it will be the marketplace which then begins to drive the whole thing forward because of the dropping cost of solar cells and rising efficiency and the rising price of oil.

Now, why do I believe that oil prices will rise?  Because of something called Hubbert’s Peak.  Hubbert was a Shell Oil engineer way back in the 1960s who predicted that we would hit the halfway point for the production of oil in the United States and after that the bell-shaped curve would curve the other way and we would become an importer of oil.

Well, people laughed at him because they said that, “Well, wait a minute.  We have Alaska.  We have Texas.  We have lots of oil fields, and so we’re not going to hit the 50% point.  America will always export oil.”  Well, wrong.  Hubbert hit it right on the nose to within the year at which US oil supplies peaked and then it went to the other side of the bell-shaped curve.  That’s called Hubbert’s Peak, when we hit the 50% point.

Now we know that Hubbard was right and the next big question is, are we hitting Hubbert’s Peak for world oil production?  That is the $64,000 question.  Many people that I've talked to, senior oil analysts, energy analysts, say that we are either at Hubbert’s Peak or within ten years of hitting Hubbert’s Peak.  Now some people say, “Well that’s stupid.  We discover new oil deposits all the time.  Look at Canada.  We have tar sands of Canada, right?”  Wrong.  It turns out that we will always have oil.  We will never run out of oil, except oil will become more expensive as we go down the other side of Hubbert’s Peak.  We would have to discover a new Saudi Arabia every five to ten years in order for this curve to simply go on forever.  That’s not going to happen.  I don’t care how many tar sands you’re talking about in Canada.  You’re not going to create a new Saudi Arabia, which produces very clean, very cheap oil, oil that is prized by the oil companies because it is relatively less polluting and has tremendous amounts of profits associated with it.

So we do know that oil prices will fluctuate because of politics, but on average it will start to rise because we will be hitting Hubbert’s Peak.  Meanwhile, solar power is going to become cheaper and in 10 years or so the two curves could actually cross, and in 20 years a new game changer arrives and that is fusion power.  The Europeans are betting the store on the ITER fusion reactor to be built outside Cadarache, France in Southern France, and if we have the power of the sun on the earth then sea water could drive all our machines.

So if this scenario plays out as I predict, it means that global warming could actually be a problem only for the next several decades as we enter the solar era and the fusion era.  The problem is we have already lofted so much carbon dioxide into the atmosphere, and we will continue to do so for decades to come, that even before we enter the solar age and the fusion age we will have so much carbon dioxide in the atmosphere that we will really screw up the weather.  But on a long-term basis I think that solar energy and fusion power will be the solution, the ultimate solution, for the greenhouse problem.