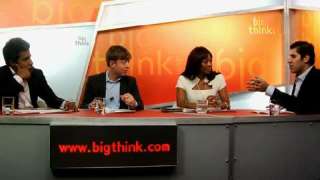 Rebuilding America for the 21st Century

Economist Parag Khanna leads a distinguished panel on the future of economic competition. This segment asks how America can invest in education, infrastructure and research at a time of fiscal austerity.

Parag Khanna:  Welcome to the Global Roundtable.  This series focuses on the Future of Economic Competition.  My name is Parang Khanna, joined by distinguished panel including Dambisa Moyo, Daniel Altman, and Anand Giridharadas.

Today we’re going to be talking about rebuilding America in the 21st century.  This was a major theme in Obama’s presidential campaign and it’s also been a big theme in Congress; however, Congress is very much deadlocked over this.  So how do we dig ourselves out of this hole, pardon the pun.

Daniel Altman: It’s a great question, right?  Because we’ve been neglecting important investments in our economy for decades now.  Investments in education, infrastructure, and high value-added research, all of the things that the President outlined in his State of the Union Address.  And how are we going to make this shift into spending money on these things when we’re facing enormous deficits.  We need a massive change in our spending patterns.  We are trying to be the world’s policemen at the same time as pay for massive pensions and health benefits for lots of people, not just elderly people, but poor people in this country.  We need to shift spending and we need to restore our saving culture so that we are the ones paying for it in the long term as well.

Anand Giridharadas:  See, there’s a problem that I see making… getting in the way of that happening, which is if a single American building anywhere in the world is blown up by anybody, the whole country will mobilize to deal with that issue.  We will sacrifice anything; we will send people where they need to go, we will spend whatever money to put those people to justice, find them prevent it.  What’s happening to infrastructure is this very different kind of war, but it’s a war of its own kind.   This kind of creaking in disintegration of the society, but it has no similar response.  And Obama tried to kind of almost martial a 9/11-like consensus in the State of the Union around fixing it, but I don’t think you ever will.  No one realizes how grave it is in a way.

Dambisa Moyo:  No, you know, it’s obvious what’s happening here.  You’ve got issues as you lead out Dan, issues around education, issues around infrastructure, issues on an energy policy.  Everybody acknowledges that these are absolutely fundamental things that the United States and European countries have to get right, but the problem is, again, hyper politicization.  Every two years you have an election.  You had an election last year; you have another election next year.  It essentially means that governments spend all their time very rationally focusing on tactical short-term issues and spend virtually no time on more structural issues long term.

Parag Khanna:  Aren’t the deficit busters in Congress completely wrong that we should be freezing spending even though these are such vital initiatives because, in fact, our deficit, as enormous as it is, our debt is really so large, so many trillions of dollars that it’s not even a number, it more of just a concept.  And what foreign creditors are looking to see is not, can the United States repay tomorrow or the next day, but rather, are we building an economic baseline and a foundation that will have the capacity to repay in the future?  Therefore, these are necessary investments. Is that wrong?

Daniel Altman: I think you’re absolutely right, but we have to, again, shift the spending so that we are spending it on things that will increase our ability to repay in the future.  We have to invest in the long-term potential of the economy to grow.  If you look at discretionary spending in Washington, a lot of that money is not doing this, and we need to move to the areas that do, it’s been a big change over the last 20 years moving away from them, we need to take it back?

Parag Khanna:  How about the charter companies, the 19th Century model, the Carnegie’s the Rockefeller’s these major corporations that really built the railroads in the United States through public/private partnerships.  Why don’t we do that again?

Dambisa Moyo:  Well I think that most people… look around, most private investors look around and say, way too much uncertainty, lack of clarity on taxes, lack of clarity on industrial policy in the United States for sure. And that does not give private investors the sort of comfort that they need to invest in these areas.  We’ve seen Warren Buffet make large pledges into the private sector over the past 18 months, and I think you would see much more of that if people felt that the government was really serious about creating an environment where people get their returns back.

Anand Giridharadas: I think one of the things that’s distressing when you see a place like China.  We always emphasize the political system or the human rights abuses of the Jaspin Revolution, all of which is important, but they are doing real, making real investments to make people’s kind of daily lives incrementally better by the week in a way that we’ve just forgotten to do.  And asking ourselves in a kind of very deep way, why is our political system is unable to be responsive to people’s every day needs in a way that an authoritarian system is?  Is a very serious question.

Daniel Altman:  Well we can envy the authoritarian system for it’s ability to make big investments and plan for the long term, but the fact is, there’s very little accountability in that system.  And so if you think that there would be wastage in a project that politicians declare that they’re going to invest in here, there’s an enormous amount of wastage going on in these authoritarian regimes too, and they will eventually pay the price for that as well.

Parag Khanna:  So we do all agree that we do have to invest in our infrastructure and that it’s not going to be perfect, there’s a lot of uncertainty, but there’s an equal amount of uncertainty in authoritarian societies like China, where they make lots of investments, but there is in fact a lot of corruption as well.  So, but there is a consensus that we have to rebuild.  So, with that, thanks for your insights and more on that and relevant topics at BigThink.com.

Who’s Really to Blame for the Economic Crisis?