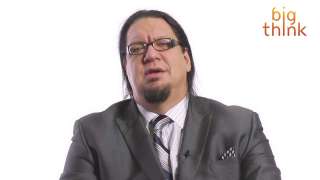 Penn Jillette says there is no such thing as a war on Christmas. And yet, Jillette says we’re leaving out “close to 30 percent of the population of the United States of America…Why can’t you just say, it’s a beautiful season, we all love each other? Let’s all have a good time.”

Penn Jillette: I don’t think there’s any attack against Christmas.  I think that seeing including other people in a seasonal joy, how can that be seen as an attack?  Maybe the greatest speech of our time, most probably the greatest speech of our time, is Martin Luther King’s I Have a Dream speech.  What Martin Luther King does in that speech, Martin Luther King was a religious man.  Martin Luther King was a Reverend.  He says in that speech, he doesn’t say this is just for Christians, he says it’s for everybody.  He doesn’t use the word “Christian” anywhere in the speech. He does refer to a God, he does say:  “Free at last, Lord, Lord,” but he is quoting a Spiritual.  He was a preacher who spoke in churches and yet when it was important to bring other people in, the, I Have a Dream speech speaks to me, it speaks to atheists.

And I don’t care if you’re talking about Walgreen’s, if you’re talking about sending out Christmas cards or your setting up something on a town square.  Why do you want to leave people out?  Why is it considered an attack to say “holidays,” to say “seasonal?”  I mean, don’t you want other people to join you in joy? Why are you excluding other people?  I don’t think there should be any sort of, you’re not allowed to say Christmas.  I think you’re fine putting up your trees.  I think you’re fine talking about Santa Claus and you’re fine talking about Jesus Christ, about equal to me.  But why leave me out?  Why do that?  What’s your motive?  And trying to turn around a “we want to leave you out,” into “why are you forcing us to not have our joy,” is insanity.  It’s backwards.

So sure, sure, say Christmas, but you’re leaving out right about now close to 30 percent of the population of the United States of America that you are telling, I’m not talking to you.  Why can’t you just say, it’s a beautiful season, we all love each other.  Let’s all have a good time.  Why is that terrible?   I also think that the war on – I mean, I would love to take the Christ out of Christmas.  I mean, I would love that.  I would love there to be a time of the year where everybody came together.  I mean, there’s something that’s happened in this country over the past, well 100 years, but really over the past 50 years, where this word “Christian” has become more important.  The early part of the 20th century, the late part of the 19th century, you had Baptists, you has Southern Baptists, you had Methodists, you had Congregationalists, you had Catholics, you had, you know, all these different kind of little sects.  You had Baptists and Southern Baptists and then Joe’s Baptist and you know, Bill’s Bait Shop and Baptist, you know, you had all these little groups.  And they were all kind of warring.  And then in many people’s opinion, in order to fight abortion, to get a consensus and a strong group to fight that, they kind of adopted this word “Christian,” which isn’t used much, even before Jimmy Carter, you know.

The word, “Christian” to count the Catholics and the Protestants and all the Protestants all together and that allows them to say stuff like Christian nation and allowed them to say stuff.  Because if you take each sect individually, well, non-religious is one of the biggest ones.  You have to do all of the Christians together, throw them all together to get this 60, 70 percent. So I just think they should keep going.  Why stop at Christian?  Why not keep going to American?  Why not make the Christmas time of the year an American holiday and really include all Americans?  And then we keep going, why not include all people.  I mean, I don’t see why you want to close people out.  It’s your right to close people out; it’s your right to have a club that people can’t belong to.  But, why do you want to do it?  Why not just give a smile and welcome us in?  Welcome us into your stores, make a buck.  Welcome us into your homes, have a laugh.  You know, welcome us everywhere.

And doing holiday instead of Christmas brings everybody in.  Doesn’t seem that terrible, but I certainly don’t think there should be anything legal stopping people from saying all the Christmas stuff they want.  I am more in favor of freedom of religion than anyone I’ve ever met.  I am – I think you should have all the prayer meetings you want all the time with any religion you have.  I’d rather you didn’t do it on my dime.  I’d rather you do it on your own with the people that agree with you.