Skip to content
Who's in the Video
Paul Bloom
Paul Bloom is the Brooks and Suzanne Ragen Professor of Psychology at Yale University. An internationally recognized expert on the psychology of child development, social reasoning, and morality, he has won[…]
Go to Profile
Videos
Dehumanization Isn’t as Bad as We Thought, and Empathy Might Be Worse
Empathy moves us, but it may move us to make an unethical decision. Conversely, says Bloom, dehumanization is not the ultimate evil we typically assume it to be.
▸
5 min
—
with
Paul Bloom

Yale psychologist Paul Bloom likens empathy to a spotlight, shining down brightly to illuminate an actor on a stage. The analogy brings together two opposed camps: those who feel empathy is essential to making good ethical choices, and those who, like Bloom, feel that empathy is just another word for bias. As he explains, bias can be good or bad, but it always emphasizes the suffering of a small group at the expense of a larger set of people. Empathy moves us, but it may move us to make an unethical decision. Conversely, says Bloom, dehumanization is not the ultimate evil we typically assume it to be. 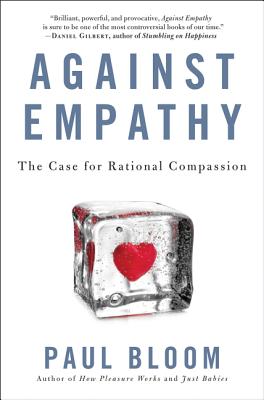 Paul Bloom:  So we have all sorts of biases to favor our own group over others. Some of these biases I think are morally respectable. I’m not embarrassed that I love my children more than I love other children. Or love my life more than I love other people. But others are less respectable. We have biases about skin color, about national origin, about even sports teams where these things may seem kind of arbitrary and not very important. But they play a huge role in our lives. We’re hugely biased creatures. We’re naturally carve the world into in group and out group. I do some research on babies and I would argue that this in group, out group distinction comes naturally to us. That you could see it in babies before their first birthday. Even if empathy were to be stripped from our heads. If you were to take a pill that would blot out your empathy you’d still be biased. You’d still favor yours over another group. There are many sources of bias. It seems to be wired into all of our emotions, all of our decision making. But empathy is particularly vulnerable to bias. I use the analogy of it as a spotlight and, in fact, many of the fans of empathy use that analogy as well because it captures the apparent good that empathy can do. It zooms you in and makes you care.

But a spotlight only illuminates a small area and a spotlight only illuminates where you point it. And so empathy is exquisitely subject to bias because our bias tells us where the spotlight is pointed to. I could try to do a rational cost benefit analysis and I can do a pretty good shot at being unbiased and fair adding up the people who suffer from the people who benefit figuring out a solution. But once empathy comes into the mix bias is inevitable. And so empathy making decisions based on empathy exaggerates our in group, out group bias. It brings it to the fore and makes it very hard to override.

So it’s a great question what goes on when we’re so rotten to other people. And one ingredient of it I think really is dehumanization. It’s when we think of the out group not as a people but just as things. And this doesn’t necessarily motivate cruelty. You’re not cruel to things. You’re not cruel to nonhumans but it motivates a sort of moral indifference. And so if you want to ignore the fates of people dehumanizing them is a great way to do so. I’m somewhat skeptical though about the importance of dehumanization in atrocities. I used to think this played a huge role. I was convinced by people who do wonderful work like David Livingston Smith who argue dehumanization is at the core of all evils. But now I’m less certain. There’s been critiques of this work and a lot of critiques point out that the people we hate the most, the people we torment the most, cause them to suffer the most aren’t people we don’t view as people. Because if you don’t view them as people why would you want to make them suffer. It’s people you hate. In other words it’s not people you kind of dehumanize but it’s rather people who you acknowledge their humanity and this is why you want to make them suffer. This is core to wanting to make them suffer.

Up Next
The Best Motivation Tips for Managers and Employees, with Dan Ariely
▸
7 min
—
with
Dan Ariely
Related
Sponsored
What childhood “money story” is shaping your financial behaviors?
Here are the signs that you inherited “money anxiety” from your parents.
The Present
The “maritime Indiana Jones” who salvages shipwrecks now wants to tow icebergs
Simple physics makes hauling vast ice chunks thousands of miles fiendishly difficult — but not impossible.
Neuropsych
Inside the brains of aging dogs
In a citizen science project, thousands of pet dogs are helping scientists to understand what happens to memory and cognition in old age.
Neuropsych
The most common source of awe might surprise you
It's us.
How to fix your money trauma
Do you remember feeling “money shame” for the first time?
▸
7 min
—
with
Dr. Brad Klontz