Frank W. Abagnale says scammers don't discriminate — here's what you can do to protect yourself.

Frank W. Abagnale
Frank W. Abagnale is one of the world's most respected authorities on the subjects of forgery, embezzlement and secure documents. Mr. Abagnale has been associated with the FBI for over four decades. He lectures extensively at the FBI Academy and for the field offices of the Federal Bureau of Investigation. He is a faculty member at the National Advocacy Center (NAC) which is operated by the Department of Justice, Executive Office for United States Attorneys. More than 14,000 financial institutions, corporations and law enforcement agencies use his fraud prevention programs.
06 September, 2019

So doing the research for this book I realized that no matter how sophisticated the scam was or no matter how amateur it was and I looked at every type of scam I found that there were really basically two red flags. At some point someone was either going to ask me for money, and it had to be immediate. Go down to Walmart, get me a Green Dot card, read the number back to me, give me your bank account number, give me a credit card over the phone. It had to be right now, this moment. Or I was going to ask you for information. Whats your social security number? Whats your date of birth? Where do you bank? Whats your credit card number?

Every scam has that red flag. So one of the things I realized is that you start to recognize those red flags no matter what the scam, whether its a romance scam or its someone trying to say its a grandparent scam, sweepstakes scam. If you start to recognize those flags you know it. Of course, all con artists try to get people under the ether. The only thing thats real scary today is that 50 years ago when I did it, and there were con men and con women, which basically stood for confidence men, they had to gain your confidence and it was one-on-one. You were sitting right in front of me. I had to dress well, speak well, have a good vocabulary. And, of course, you got to like me, know me and we had a relationship. Because of that there was some emotion and obviously there was some compassion. I might have said well Im not going to take this guy for all his money. Hes kind of a nice guy. Im just going to take some of his money. I dont want to leave him broke.

The difference today is the con man is someone sitting in a kitchen with a cup of coffee in their pajamas on a laptop in Moscow. They never see you. You never see them. There is no emotion. The victim never sees you. The victim doesnt know theyre being victimized, so there is no compassion. I find that they rob you for every single penny they have and theres no compassion involved at all.

One of the things Ive found doing the research for the book is that millennials are scammed more often than seniors but seniors lose more money because they have more money. I actually realized that anybody can be scammed. I do a podcast out of Washington DC for AARP called The Perfect Scam. When people get scammed, we send an investigator out to interview them and talk to them, and then I later do a podcast about that particular scam. Weve had two former FBI directors in their 70s and 80s now that have been scammed.

You know these are typically like grandparent scams. A grandparent scam is one of the most common scams today where basically the phone rings in the evening, you go over and the caller ID says that its a New York police department. Right away you believe the caller ID because it says its NYPD. The easiest thing to do is manipulate caller ID. I can make it say U.S. Treasury, IRS, your brother, the neighbor next door, whoever I want it to say. You pick up the phone and they say this is Sergeant ORourke. We arrested your grandson. They give you the grandsons name. He was on the Westside Highway. He was DWI. He was driving this type of vehicle. They tell you his car. Of course, it registered in your mind you know thats his car. He had a passenger, her name was and you say oh, thats his girlfriend. And then they say he asked us not to call his parents and they give you the parents name. Of course you know that. You recognize that.

And they say he asked us to call you. And what it is is he needs to post bail in the next 24 hours or two hours or whatever they say. And if he doesnt hell have to spend the weekend in jail. Oh, no, no, no, no. How could I do that? Well, you could just give me a credit card over the phone if you like. Its $500. And people fall for that and thats what one of these FBI directors fell for, and they do it. But what happens today is they go to social media first. The grandson has pictures of his car. He has pictures of his girlfriend and her name, pictures of his family and their name. They get all of that so that it sounds so realistic along with the caller ID. And if youve never heard of the grandparent scam or you werent aware of it, obviously it sounds very real to someone. Thats why in writing this book, I always have felt that education is the most powerful tool to fighting crime.

Thirty-five years ago I went around the country talking to police departments about developing crime prevention units and they thought I was crazy. I said its not just investigating crimes, its preventing crimes. And today there are crime prevention units all over the world. So, whether Im training an FBI agent at the academy or Im training a banker at a bank or Im training a consumer, if I tell them heres the scam, heres how it works, this is the red flag, theyre smart enough to catch it next time it comes up or remember it. Typically people are honest, thank god. And because theyre honest they dont have a deceptive mind. So when that phone rings or that email comes over or that call they dont start immediately thinking this is a scam. Somebody is trying to rip me off. That never enters their mind unless somebodys taught the that it is a scam. 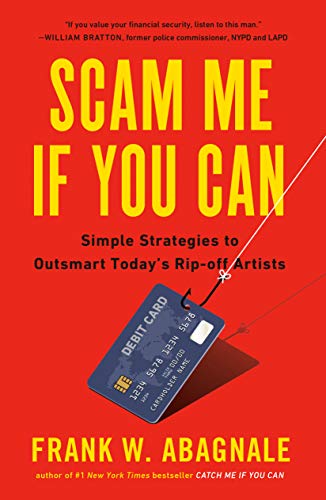