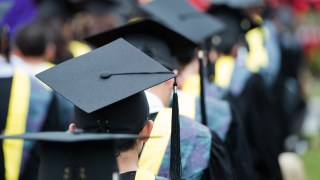 Andrew McAfee of the MIT Sloan School of Management discusses the ways in which automation threatens the jobs of tax preparers and lawyers.
▸
4 min
—
with
Andrew McAfee

Automation is a major threat to the median American worker who specializes in what is called “routine knowledge work.” Andrew McAfee of the MIT Sloan School of Management explains that this is the sweet spot where technology is making its greatest inroads. Jobs like tax preparation, which often requires a mastery of formulas and policy, are becoming easier and easier to automate.

At the same time, there are quite a few high-skill professions that are also feeling this sort of pressure. Computer programs can more accurately discover a smoking gun hidden within hundreds of pages of court documents.

Andy McAfee: The median American worker doesn’t do manual labor anymore. The average American worker is not a ditch digger. But they’re also not doing incredibly high-end particle physics or data science. They are what you’d call the somewhat routine knowledge worker. That is right in the sweet spot of where technology is making its greatest inroads. And a good example of that is a tax preparer. That’s someone who has mastered a very complicated American tax code, but they do the same thing over and over. They apply that code to an individual person. That’s recently become fairly easy to automate and automate very well. So now a lot of us find a $40 program like TurboTax completely adequate for our needs. That’s great news for two out of three constituencies.

That’s great news for us as consumers. We get very good tax advice at a lower price point. It’s really good news for the team at Intuit. They created a lot of value. They should be able to capture some of that value. The constituency that’s most negatively affected is the body of tax preparers out there. These are folk who are actually above-average educated. They’ve been to college. They’ve been to an advanced degree. They’ve got a CPA. They’ve done the right thing. They’ve invested their human capital in an area they thought would lead to a long and productive career. And all of a sudden here comes a $40 piece of software that’s putting a lot of downward pressure on their wages.

And the law has been another pretty high-prestige, well-paid, highly educated profession. There’s a lot of pressure in the legal industry these days. Law school applications — not per capita, but raw law school applications are at their lowest level since the 1970s. There are a number of reasons for that. One of them is the fact that if you’re in a discovery process right now and you want to figure out what’s in the other guy’s documents, you no longer need to employ an army of lawyers to sit around and read boxes full of documents. Those boxes are now electronic folders full of electronic documents. And we’ve got a category of software called eDiscovery where you basically just tell it what you’re looking for, hit a button and milliseconds later you get back every instance of that pattern.

If there’s a smoking gun in the documents, it’s very likely to find it. The head-to-head comparisons that we’re able to do between the results of eDiscovery and the results of that army of lawyers sitting around and reading documents indicate that the eDiscovery actually gives you higher-quality outcomes. So a lot of these trends are putting pressure not just on that classic median American worker, but even on fairly highly educated, well-paid ones like law.

It’s always been the case that technology is an engine of what Joseph Schumpeter called "creative destruction." The simultaneous destruction of old companies and industries and jobs and tasks and the creation of new ones. And that’s clearly going on right now. We see a lot of new creation of technologies, jobs, industries, and professions. So data scientist is a very new job description. This is not just a statistician with a new business card.

These are people who have really mastered a very diverse and important body of skills and they’re bringing them together to take advantage of the oceans of digital data that we have and really tremendous amounts of computational power. Not a job category that existed 10 years ago, but one that’s up there at the fairly high end of the skill distribution. It’s a pretty good example of this phenomenon of skill-biased technical change.

Leon Logothetis: Richness Isn’t About What We Have in Our Wallets