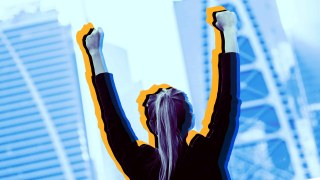 What makes work meaningful: Getting money or feeling motivated?

In the field and in the lab, Psychologist Dan Ariely finds that people want big challenges, some autonomy in pursuing them, a bit of healthy competition, and a sense of completion.
▸
4 min
—
with
Dan Ariely

In the field and in the lab, Psychologist Dan Ariely finds that people want big challenges, some autonomy in pursuing them, a bit of healthy competition, and a sense of completion.

Dan Ariely: When we think about work, I think we have this idea that people work for money.  In fact, I think we have the idea that people don’t want to work, that all we want to do as human beings is to sit on the beach and drink mojitos.  Sadly, we don’t have enough resources to do that, so we work so we can get enough money to drink mojitos.  And that’s basically the idea.

But we can ask ourselves whether this is the right way to think about human motivation.  So think about something very different.  Think about something like mountain climbing.  George Lowenstein has done this great analysis of all kinds of books of very, very famous mountain climbers.  You would think that those books would be filled with pleasurable moments and insightful experiences and the truth is, they’re not.  They’re filled with nothing but misery and frostbite and pain and hard breathing.

You might expect that after people do something like that, they will go down and they would say, “What a huge mistake.  I never want to do this again, never in my life.”  But that’s not the case.  In fact, people reminisce about it, it gives meaning to their lives.  Once they heal, they want to go up again.  So how do we think about experiences like that, that fly in the face of this idea that all we want to do is to sit on the beach drinking mojitos?

It turns out that sure we care about the momentary pleasure of what we have, but we also care about lots of other things.  And I think work is in the same category.  Sure, we care about money and it’s nice to get paid, but there’s also a whole range of other things that we get--a need for achievement and completion, competition with other people, and a sense of progress and a sense of meaning.  And all of those things really, really matter.

But as we move to a knowledge economy that depends more on people’s good intention and willing, and as the nature of work becomes more amorphic and work kind of interweaves with life in all kinds of interesting ways, as we move more and more to that kind of workplace, I think the relative importance of money is getting smaller and the relative importance of those other things could get… could get much larger.

The problem, of course, is many times people don’t understand it.  So here’s for example a story.  About a year ago, I went to a big software company on the West Coast of the U.S.  And I planned on this trip quite a few months in advance, but a few days before I got to that software company, the CEO of the company came to this group of people I was going to give a talk to and cancelled the project they were working on for two years.  For two years, they were working on the project that they thought would be the pinnacle of this software company. . . . And I never sat in front of more depressed group of people.  They were just completely miserable.  And I asked them.  I said, “How many of you show up to work later than you used to?”  And everybody raised their hand.  And I said, “How many of you go home earlier than you used to?”  And they all raised their hand.

And I think the point is that for this CEO, he thought the direction they were going was not a good direction.  And maybe he was right.  But he did not take into account their motivation and meaning and what they really cared about, and by doing so, he basically deflated them, they were completely uninterested in what they were doing from that moment on.

So I think there’s basically two lessons here.  The first lesson is that we need to recognize how important meaning, completion, competition, motivations are in getting people to care and to work hard, and we need to try to encourage those.  And the second thing we need to do is, unlike this CEO, we need to do things that don’t undercut those human motivations.