Maria Popova is a reader and a writer, and writes about what she reads on Brain Pickings (brainpickings.org), which is included in the Library of Congress archive of culturally valuable materials. She has also written for The[…]
Go to Profile 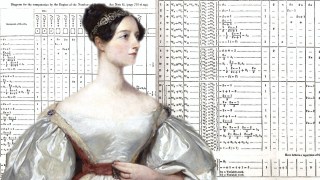 Today's video is part of a series on female genius, in proud collaboration with 92Y's 7 Days of Genius Festival.
▸
3 min
—
with
Maria Popova

This video is part of a series on female genius, in proud collaboration with 92Y’s 7 Days of Genius Festival.

The story of Ada Lovelace, the world’s first computer programmer, begins with a mathematically gifted mother and, as father, the Romantic poet Lord Byron. Notorious for his philandering, Byron contributed the strong poetical streak to his daughter’s worldview. Lovelace’s interest in poetry, however, was something her mother wanted stamp out, surrounding Lovelace with mathematics at the exclusion of the arts. But when Lovelace met Charles Babbage, the mechanical engineer behind the first computer, she found an outlet for her creativity, writing the first complete computer algorithm and becoming the world’s first computer programmer, all at the age of twenty-seven.

Maria Popova:  Augusta Ada King, Countess of Lovelace, was born Ada Byron on December 10th 1815 and is known today simply as Ada Lovelace. She is celebrated as the world's first computer programmer, the first person to marry the mathematical computational capabilities of machines with the poetic potentialities of symbolic logic. This novel combination was in no small part a function of Ada's unusual upbringing. She was the daughter of a reserved but mathematically gifted mother and the only legitimate child of the great romantic poet and notorious playboy Lord Byron. But Ada never actually met her father; her parents separated when she was only five years old and Lord Byron died in Greece when he was 36 and Ada was eight. Her mother decided to raise Ada all by herself and made a great effort to eradicate any trace of her father's ill influence, which meant removing all poetry from the little girl's life because she believed that poetry was the root of the Lord Byron's vice. So instead she immersed little Ada in math and science from the age of four. And by the time Ada was 12 she had grown fascinated with mechanical engineering. And at the age of 12 she wrote a book titled Flyology, in which she illustrated with her very own diagrams her plan to build a flying apparatus. But even so she felt that the poetic part of her was being repressed by her mother's insistence on science and one day famously quipped, and this is how teenage girls rebelled in the 1800s, she told her mother that she was going to pursue poetical science.

Ada Lovelace struck up a friendship with the brilliant but eccentric Charles Babbage, who at the time was working on strange inventions that one day would have him celebrated as the father of the computer. Their collaboration was an extraordinary union of software and hardware. Lovelace brought the poetical science and Babbage the mechanical engineering for the machine. In 1843 she translated a scientific paper by an Italian military engineer adding to it seven footnotes. Together they measured 65 pages or two and a half times the length of the original paper. In one of those footnotes Lovelace wrote what is considered the first complete computer program, which made it the world's first paper on computer science and made Lovelace the world's first computer programmer. She was 27 years old.