Maria Konnikova is the author of two New York Times bestsellers: The Confidence Game , winner of the 2016 Robert P. Balles Prize in Critical Thinking, and Mastermind: How to[…]
Go to Profile 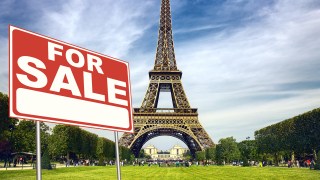 A con artist sold the Eiffel Tower, twice — by listening

We tend to think con artists are smooth talkers and persuasive sellers, but listening is their most important quality, says Maria Konnikova, who has written a new book on con artistry.
▸
4 min
—
with
Maria Konnikova

We tend to think con artists are smooth talkers and persuasive sellers, but listening is their most essential quality, says Maria Konnikova, who has written a new book on con artistry. Here she discusses the case of Victor Lustig, a Frenchman who sold the Eiffel Tower twice for scrap metal to two different buyers. Too embarrassed at being taken in, the buyers never reported Lustig.

As Konnikova explains, Lustig literally wrote the book the con artistry. In his work 10 Commandments of the Con Artist, Lustig writes that a con artist is a good listener, not a good talker. In other words, con artists are looking for your tell — your signal about who you are, what your desires are, what you fear, etc., so that they can promise you exactly the thing you want most.

Why aren’t we alive to such an obvious tactic? Simply because we’re not used to truly listening to people, says Konnikova, and so we’re not accustomed to recognizing such genuine interactions. In our constant pursuit of doing more, more often, we lose depth, and that self-awareness is crucial when you’re up against someone who wants to fleece you.

Our pattern of inattention has a dangerous double effect: when we notice that someone is finally, truly listening to us, we become more likely to open up and bear personal details that we wouldn’t otherwise disclose. And that information is exactly what con artists are hoping to extract from you — then they’ll sell you the moon, or the Eiffel Tower if you’re in the scrap metal business.

Maria Konnikova:  One of the things that con artists do incredibly well is actually read other people. So psychics, psychics are kind of the ultimate at this. They can read all of the cues that you're throwing off without realizing you're throwing them off, and so they seem psychic to you even though you're telling them everything — you're giving them everything that they need to go on. And the truth is most of us don't do that. Most of us really do not listen to other people.

Victor Lustig, who is one of the most famous con artists of the 20th century, who's nickname was Count Lustig and he sold the Eiffel Tower two times for scrap metal, he said, and neither time was he reported because the people who had bought the tower we're so incredibly just embarrassed that they didn't want to say anything. That's how he was able to pull it off twice and lived to tell the tale. He wrote something called the 10 Commandments of the Con Artist, and one of the commandments is that a con artist isn't a good talker — a con artist is a good listener. And I think that that tells you everything that you need to know.

Con artists are people who actually listen. They listen when you talk. They pay attention. We don't do that. Normally when we ask a question we don't really listen to the answer. We're half there. We're half thinking about what we're going to say next. We're thinking about ourselves, we're not thinking about the other person. Maybe we're even on our phone checking something while they're talking. You say, "Oh yeah I can multitask. Don't worry. Keep going." No you can't! You're not actually listening to them and so you're missing all of these cues. The thing that makes us better able to read other people is being motivated.

Motivation really enhances our ability to look at other people and see what they're telling us. It forces us to listen. Con artists are motivated to listen because that's their livelihood. They need to read you well in order to sell you what they're selling you. And most of us don't have that motivation. And so if we do, if we figure out a way, you know, this is actually important to me. I want to invest in this friendship. I want to really understand this person. I want to be a kind of person who really is a good friend, who really pays attention. If we motivate ourselves then all of a sudden we can sometimes picked up the cues like how are you sitting? What's your posture like? What's your voice like? Do you look like you've slept? Have you changed anything about your appearance? How often do you change your hair or change something and nobody notices?

There's this wonderful story of a news anchor who came in wearing the exact same thing every single day just to see if anyone would notice, and no one did. And he was male so that was a little bit easy. It was a little bit of a cheat. He would just wear a shirt and a suit and everyone says "okay." And a woman, I don't think would have been able to pull it off quite as well. And yet sometimes women complain that husbands don't notice a change of color or a totally new outfit, that they're just not paying attention to those sorts of things. Motivation, it's just hard to keep yourself motivated all the time to pay attention to people, unless you're a psychic and you know that reading that person well will enable you to have them come back because then they'll believe that you're a real psychic because they were able to extract a lot of information from you.

That, by the way, is another one of the skills. It's not just observing it's being able to extract information. So, being a good listener, people can tell when you're listening. And when they can tell that someone is really listening they start talking. You start talking more and more when you feel like someone is actually listening to, what you're saying, and all of a sudden you're telling things about yourself that you never thought you were going to be telling.

Hey Bill Nye! Let’s Save Planet Earth before We Move to Mars