JAMES STONER: The United States Constitution is certainly dedicated to the rule of law. John Adams famously said, quoting Harrington who himself is quoting Aristotle or alluding to Aristotle, that the United States aims to establish the rule of law not the rule of men. And the Constitution lays out a number of rules about how governments should act. Some of that is involved in creating new institutions and defining those institutions in a way summoning them into being and some of it is about putting restrictions on institutions that are already there or practices that are unavoidable.

So, when does the rule of law and the rule of men or something besides the rule of law create a conflict in American government? Well, one of the great conflicts about the rule of law in governance comes up during the Civil War. Abraham Lincoln was accused of being a dictator by his political opponents and only partially defended against it by his friends. He made a case against it, but even that case was kind of modified. And that's this: in the great crisis of the spring of 1861 when a number of states purported to succeed from the Union, something which they claimed was legal and which Lincoln claimed was a violation of the law of the Constitution, the federal government was faced with this tremendous danger that its capital was located in the middle of slave territory. The state of Maryland was a slave state and the state of Virginia, of course, was a slave state and the critical question had to do with Maryland. And Virginia was succeeding from the Union or sought to succeed from the Union, but Maryland Lincoln had no intention of allowing to succeed from the Union and so he suspended habeas corpus, one of those basic guarantees in the Constitution that there will be no imprisonment without a trial, Lincoln imprisoned people without a trial and when the chief justice of the United States told him he had to release a prisoner he ignored him. And Lincoln's claim was that even though the law of habeas corpus is in the Constitution, all be it with a provision for suspension but it looks like maybe suspension by Congress rather than the president, Lincoln said you have to be able to preserve the whole of the law, you can't allow the whole of the law to collapse because of some particular law which you're trying to enforce just according to the letter of the law. So, Lincoln suspended habeas corpus. Later on, they put on trial newspaper editors who were sympathetic to the confederate cause and promoting mutiny among the troops and here the argument that Lincoln made was that you can't, by following all the details of the law, put at risk lawfulness itself, but it was certainly an instance where he was making an appeal to his judgment, his wisdom about what the circumstances required rather than trying to follow what the rules permitted or allowed.

Not to mention that the rules didn't say what to do in a case that some of the states were succeeding. Gosh, Lincoln's predecessor James Buchanan thought there was nothing a president could do to respond to succession, that that wasn't in the rules of the Constitution. Well, to be sure it wasn't in the rules of the Constitution it wasn't exactly anticipated by the founders and they probably couldn't have made a rule about it if they had or the rule would have never of been accepted as part of the Constitution. So, there I think is one of the critical moments where the rule of law, the guarantee of basic civil liberties, came up against the claim that the protection of a constitution that protects civil liberties requires at least a generous interpretation of the power to restrict, in certain circumstances, the ordinary rule of law. But if that applies at the time of the Civil War maybe the clearest crisis in American history, what about right after 9/11 when two huge buildings collapsed as a result of these sort of homemade bombs, airplanes turned into bombs an unprecedented thing and suddenly the United States is faced with threats the nature of which it doesn't really even know. Do the necessities of that moment require some restriction of civil liberties? A lot of that was handled by law made by the legislature, the Patriot Act, but whether the Patriot Act actually fit with the Constitution and the way in which it fit was a matter of much dispute. Not all of which went to court, some of it did but not all of it went to court and was resolved and I don't know that it can be resolved. So, that would be an example the instance of the threat of war or of disaster in a moment of war might require some at least narrowing of the rule of law, certainly it requires an appeal to a wisdom that goes beyond the rule of law itself. 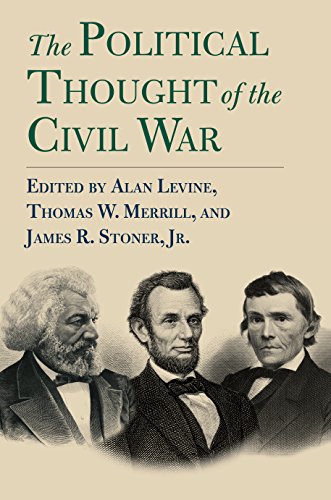