Lawrence Levy was born in London, England, and moved to the United States as a teenager. After earning degrees in business at Indiana University and law at Harvard, Lawrence became[…]
Go to Profile 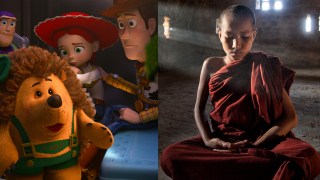 There are two people inside everyone: an artist and a bureaucrat. You'll need both to succeed in life, so how can you get beyond your apparent limitations? Take a lesson from Pixar Animation Studios.
▸
5 min
—
with
Lawrence Levy

Lawrence Levy:  The paradigm that's driving people the most, which is the performance paradigm to succeed, no one seems to be as interested in the secular scientific proof that that's good for you. So we're on this rush to sort of succeed and work 24/7 and make all this money and it's all on faith. Not only is there no proof that it's good for us, there's actually more scientific evidence that suggests that it isn't, but when it comes to meditation then we want the proof. So that to me is an interesting dynamic.

The middle away is an ancient eastern philosophy probably first attributed to the Buddha, and in fact the life story of the Buddha is really sort of a metaphor in a way for the middle away. And there are many ways to sort of recount the middle way, but in the context of Pixar I think of it like this: you can imagine perhaps that there are two people inside of us. And so one of the people inside of us you can think of as a bureaucrat. And the role of the bureaucrat is to function, is to function well in the world, to make sure we get up on time, that we get to catch a play on time, to make sure that they'll be dinner on the table at night and we have enough money in the bank and all of these requirements that we need in order to be sort of successful at functioning in the world. And then there's another person inside of us that you can think of as like an artist or a free spirit. And that free spirit just wants to live and love and laugh and create and be and enjoy and just experience all the richness and possibilities of life.

And what the middle way would say is that if we get stuck in either one of those places we subject ourselves to sort of stress and agitation so that if everything is about function, you know, bureaucracy, performance, that's all we care about, we might one day kind of wake up and wonder if we ever truly lived because we've been so focused on just getting it right, getting it done or whatever it is. On the other hand if we just focused on the artistic side that sort of free spirit part of us then we might suffer from sort of lack of momentum, we might get frustrated because we didn't have enough momentum to get things done. And so what the middle way is about is a philosophy of harmonizing these two things within us. And I saw in Pixar a metaphor for that because it really is a company that succeeded because it was able to harmonize these two ideas, but it turns out that it applies to much more than Pixar, I think it applies to building great organizations, even living great lives.

One of the challenges that we had in terms of experimental feeling good, feeling productive, feeling good about who we are and what we do is that we get stuck in stories. It's really interesting actually because at Pixar it was a story company so I go for a few years at Pixar and I learn well it's all about story. That's what I learn. And then I go off and study Buddhist philosophy for ten years and I come to the scintillating conclusion that it's all about story. Why is that? It's because the ideas of these philosophers now are being proven over and over again by neuroscience says that we function in a story. We have a story in our minds about what it means to be a man, what it means to be a woman, a son, a daughter, an employee, what it means to succeed. We have these stories and we get stuck in them and that stuckness often produces a lot of stress and agitation.

And really the goal of a meditation is to open a door so we can go beyond our stories. That's where the magic is. So it's great for calming us down a little bit, you know, we get more control over our breath, more control over her mind, but its real potency is to take us beyond those kinds of inner limits and so that's why we recommend like the Juniper Foundation that the best thing you can do with meditation is just do it regularly, like eve

Race Is More Than a Myth: It’s an Institutional Reality