Dr. Lise Eliot is an Associate Professor in the Department of Neuroscience at the Chicago Medical School. She received her PhD in Physiology and Cellular Biophysics from Columbia University in[…]
Go to Profile 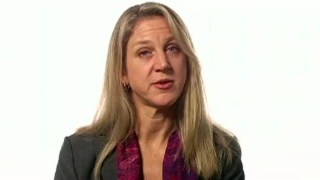 If Men are From Mars, Where are Women From?

Lise Eliot outlines biological differences in girls and boys from womb to playground, explaining the crucial role that culture plays.

Question: What are the differences between boys and girls in the womb?

Lise Eliot: Well, not a lot. You know, actually, we have a lot of data given the number of mothers who undergo ultrasound now. And although I think parents, a lot of parents, believe that boys are more active prenatally, in fact, the existing data don’t really support that. Some studies do see higher activity levels in boys before birth but others see no difference. And we even see higher activities in girls. So we definitely know boys are more active by about two years of age or even one and a half but before birth it’s not quite apparent. Probably the biggest difference between boys and girls we know before birth is that boys do seem to develop a little bit more slowly.

Maybe a week or two less mature by the end of a 40 week gestation. And that actually is a problem for babies who are born premature. It’s pretty well known in the neonatology world that premature boys have much higher risks than premature girls even in terms of basic survival. So something about the Y chromosome or the cascade of hormones that it triggers does seem to slow the male development a little bit that affects boys. But behaviorally there isn’t a whole lot that jumps out at you.

Question: How do boys and girls differ in early development?

Lise Eliot: Yes, in some ways and not in others. And so, it’s not really possible to say, you know, girls mature more quickly than boys. Yes, in some ways they do but not in every way. And, you know, the brain has lots of different circuits, a lot of different abilities, and there’s not a single pattern for male versus female development. Boys definitely are slower to develop in terms of language. This has been known for some time. But to put numbers on it, there’s about a one month difference between girls and boys in terms of the number of words they speak.

So at 20 months of age, a little girl may have a vocabulary of a couple hundred words and a little boy may have a vocabulary of 30 or so fewer words. And then he’ll catch up by a month and so on. In some ways the boys, when we talk specifically about verbal skills, they don’t ever fully catch up. This is one of the gender differences, you know, in verbal skills that we see even in adults. Although this notion that women speak 20,000 words a day and men speak 7,000 words a day is just, sort of, an urban myth that I hope is finally been debunked. The verbal differences and almost all of the cognitive differences are really quite small. A tenth or two-tenths of a standard deviation across the population. So they’re not as large as we tend to magnify them.

Question: How much does biology influence gender differences, and how much does culture play a role?

Lise Eliot: Sure. Well, there’s no question that there are innately programmed differences between boys and girls. Obviously their bodies are different. And some of those same cascades of genes and hormones we know are affecting the brain. Although we’re still years away from knowing exactly which circuit is affected in boys versus girls. But behaviorally we know that boys are more active, as I mentioned. And really one of the strongest differences that is probably hardwired, if you will, is the fascination with moving objects. And boys are definitely more interested in trucks and balls. And every parent will tell you that. And it’s true. In fact, it’s just about the largest sex difference there is.

Only sexual preference itself is actually a larger difference between males and females than this difference in toy preference. It’s much larger than the verbal differences, spatial, even things like empathy and self-esteem which are areas of concern. Those differences are much smaller than the difference in toy choice. Take a three year old boy, a three year old girl, put them in a room with a choice of toys and you will see a pretty clear separation. But what’s interesting, and I like to focus on toy choice because I think on the one hand, it definitely shows us the strong biological roots of sex difference. But on the other hand, as toy choice morphs over the preschool years, we start seeing the role of social influences.

So up to the age of about 12 months, interestingly, boys and girls don’t differ a lot in toy choice. Boys and girls both, it turns out, really like dolls up to about one year of age. And I think that’s because dolls have faces and every baby is riveted by the human face. It’s pretty much their favorite thing to look at, which makes a lot of sense. Boy or girl, you need to focus on faces because those are the people who are going to nurture you. And then what happens is that as children branch out and they get more mobile, when they’re given a choice, you’ll see this truck versus doll distinction about age three. But interestingly, when you follow the same children out to about age five, what we see, at least in Western societies, is that now boys are avidly avoiding anything girl. Even more at age five than age three, they’ll spend only ten percent of their time exploring a doll or a pink tea set.

But the girls by age five are now splitting their time, 50/50 between the building toys or the Power Rangers and the toy vacuums and toy tea sets. So I think what this shows us is the role of our culture. And certainly children with more open minded parents show more cross gender play than parents who are more discouraging of that. But in addition if you look at what’s happened to girls in the last several decades, they have been told, you can do anything. You can do any career. You can wear anything. You can wear pants or skirts. And sure enough, they have much greater latitude to explore a range of interests. Where as boys, there’s still many strong prohibitions against them wearing anything feminine or doing anything that’s regarded as traditionally feminine. So, you know, it’s culture acting on top of biology which will magnify some differences and minimize others depending on how culturally significant they are.