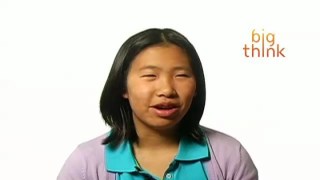 “If you put down your controller for just a second while playing Mario Kart—wham—you’ll crash and lose a life.” The 14-year-old champion pianist says the consequences are similar, albeit less severe, when playing the piano.

Question: You once said that playing Bach is like playing Nintendo. How so?

Hilda Huang: Well, okay so, when I was really young, I loved playing video games and I kind of noticed that when you play video games, you have to be really, really focused. So if you're playing maybe "Mario Cart" on the Nintendo 64, so you're driving along and of course there's a koopa waiting to hit you. But if you blink or you say, "Oh I need to get something to eat or I need some chips," so you put your controller down, and, wham, the koopa smashes in to you, so you die and lose a life. And of course, in video games, you have plenty of lives, so it's okay. But in Bach, when you're performing, you don't have that kind of a privilege. So you have to stay really focused through the whole thing and you can't stop.

Question: When was your first public performance?

Hilda Huang: I think that was when I was five or six. I think six. I went to this piano competition in Oakland and I was playing a piano concerto with my older piano teacher, and I think that was the first time I ever played in public, which is kind of interesting because it wasn't actually a performance, it was a competition.

Question: Do you get nervous before a performance?

Hilda Huang: I mean of course I get nervous, so I just try to focus on the music itself. I try not to think about anything besides the music. So usually before I walk on stage, I'm just kind of playing the piece over to myself again and again and walking through some of the spots where I know I need to be focused on what kind of sound or character I'm producing.

Question: What happens if you make a mistake during a performance?

Hilda Huang: Often in Bach, if you make a big mistake, it's really difficult to find your way back, so it's almost necessary to just stop and start over again, which I've done that a few times. But if just little mistakes, like if you miss a couple of notes, I try to forget about that section and maybe skip to a few bars forward so that a few bars forward, I know that I can keep playing and it'll be fine.