Adam Bly is the founder and editor-in-chief of Seed Magazine and the Chairman/CEO of Seed Media Group. Seed is a bi-monthly science magazine based out of New York and is[…]
Go to Profile 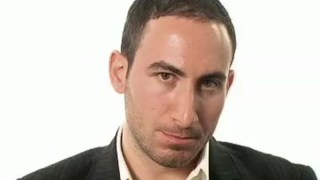 How does religion inform your worldview?

Adam Bly talks about his life experience with faith.

Question: How does religion inform your worldview?

Adam Bly: I mean I grew up . . . And when I grew up . . . I grew up in Montreal, I went to a Jewish elementary school and a Jewish high school; and studied Torah, and Talmud, and Hebrew and speak Hebrew; had a bar mitzvah; went through a full sort of Jewish upbringing. And so to say that that’s, you know, completely absent from my worldview would be inaccurate. I have, you know, more recently separated, I think, sort of the tribal qualities of religion from the more spiritual qualities of religion. And whereas the tribal qualities of religion – the sort of practices, and languages, and foods and things like that – are great forces to bind people together, I think my greatest concern with the spiritual side of religion is the practice of religion without coming at it on your own. I think that for . . . I spent . . . I’ve been spending quite a bit of time recently with religious leaders; and many religious leaders who have been taking up theoretical physics, in fact, and reading sort of the great works of the 20th century and 21st century. And it is forcing them to think differently about their faith. And think differently is all I’m looking for. Not change, not radically transform, but think differently. If at that point, once you’ve achieved a scientific literacy, you feel incomplete without God in the equation, then at this stage in my life I think that there’s absolutely nothing wrong . . . If anything there’s something kind of beautiful and harmonious about reintroducing God into the equation. If you need, as sort of Dan Dennet says, sort of a “sky hook”; if you need something to anchor it all to, that seems perfectly reasonable to me. But if you’re given religion as a solution to the ills of your life and of the world, and as the way of making things easier and simpler . . . because religion is easier than science. It’s a lot easier to blindly believe than to rigorously test . . . then I have a problem with that, and I have a problem with the people who preach that. I think that there is absolutely a place for the coming together of science and religion – both individually and as a society. And in fact I think the most important thing science should be doing right now when it comes to this question is not – as many great public intellectuals in science have recently done – attack religion, but instead do what science should do in the case of seeing billions of people doing something, is to study it and to really understand why we believe, what motivates that, and what really is at the root cause of that. I have a problem, and I think most would, with the ability when you do then blindly . . . so what the reason is for all of that . . . is that when you do sort of blindly or easily . . . too easily come to religion as your moral compass and as your kind of guiding philosophy of life, it is a way of thinking that is less rigorous in rational inquiry, and questioning things, and in being constantly inquisitive and curious. And so I think that when things happen in the world, you are less likely to question. You are less likely to think about them, and twist them, and turn them around, and turn them upside down, and see what happens when this does that as a scientific worldview would predispose you to. And I think that as a consequence of that, or as a . . . as a potential consequence of that, it is easier to mobilize those who look at religion as their kind of predominant worldview philosophy towards extremism than those who are more naturally predisposed to question things.

What stands in the way of scientific innovation?