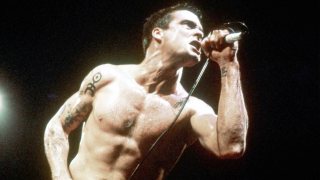 Henry Rollins: Music Is Powerful, but It Can’t Stop a War

Is music a viable force for change?  Can music stop things, start things, change things?  To a certain degree yes, maybe in pop culture, but if a song or an artist could stop a war Bob Dylan and Bob Marley would have. If those songs couldn’t stop Vietnam or whatever then songs no, they can’t stop a war.  Can they mobilize people?  To a certain degree, maybe from Monday Night Football, but to turnover a government no, but you have to rally the troops somehow.  Look at wars of the past, buglers, bagpipes, songs.  In the Civil War you had fife and drum.  You had the rebel yell.  You had melody.  You had song.  It galvanizes people.  When I have to go to the dentist Slayer, I will get through this and so music is one of those things that—didn’t get enough sleep, here is a cup of coffee and a Ramones record.  You will be awake in two minutes.  And so music is very, very powerful.  It inspires a whole lot of people.  Look how many tickets get sold.  Look how many records get sold.  Look how we idolize rock stars because they come to our aid.  They inspire the hell out of us.  Okay, so there is a lot of power there.  Bands can certainly bring awareness to things like why did you go to that website, because Tom Morello said I should.  Way to go Tom Morello, smart guy, real smart guy and probably have opened the eyes of a lot of young people all over the world by saying I read this book, so should you.  Way to go and that is him using his rock stardom in a very good way and he does it all the time.

Like Eddie Vedder to say hey you like me, we love you man, good, then go to this website and read all about this, make a contribution if you think it’s worth it.  Hey, that website is going to get looked at by a whole lot of people and so musicians, artist types can definitely and they have historically, shine the light on something.  Can they affect real change?  To a certain degree and I think you can always fallback on the idea that you don’t have to necessarily change the world when you can change worlds.  If you can get to one person, I do it with my little radio show.  I have a radio show on a national public radio station called KCOW.  The best letters I get is I'm 16 years-old and you turned me on to John Coltrane.  That’s—got them.  So we just opened that young person’s mind up to bebop.  Let it spread like a virus.

And so you can change minds with your stardom or your notoriety, but as far as music being a powerful vehicle for change I’d like to be wrong about it, but I am not convinced of its power.

Switching off an “Always on” Culture