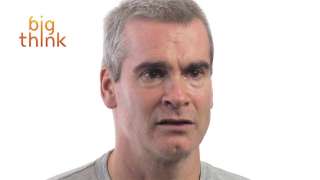 Henry Rollins’ 3 Rules For Success As An Artist/Entrepreneur

So you want to be Henry Rollins, kid? Bad news. The job’s already taken. The good news is that following Henry’s three golden rules gives you strong odds of success on your own, unique path as an artist/entrepreneur – the one that only you can carve out.

[0:53:19.1] Henry Rollins:  I get asked a lot Henry, how do you fit it all in because you’re doing this and this and this, you have a lot of pies spinning on the end of a lot of sticks.  Well I have basically groomed my life to where there is not a whole lot else going on and so I get these things done to the exclusion of other things, wife, children, family, sanity, a state of non stress, fitful sleep, but what I get in return is I get to do all this stuff, but the main motivating driver that has me saying sure I'll try that is what had me power walk four or five avenues and three streets to get here from something else I said yes to, is I know very full well what I have to go back to and I know where I come from and so that’s why I kind of lunge at that which comes my way and so everything I do now is about doing this stuff to where after so many years of conditioning I really don’t know any other way.  I live alone.  I travel alone for the most part unless I'm on tour.  I have people I work with.  I have had the same assistant for 14 years.  She suffers me, not gladly.  So how many people do I know?  I know my assistant.  I know my best friend from my youth, my road manager, my engineer at the radio station and you know friends I grew up with in my old hometown where I still see them.  I play with their children.  I get to be Uncle Henry for all these delightful young anarchists, vegans and that is it.  Otherwise, I go the long route.  I go do 100 days in a tour bus.  I go do 100 days with my backpack by myself.  Do I miss anybody?  No, absolutely not and I'm not trying to impress you.  I just don’t have it.  Do I look at women on the street?  Yeah, I'm 50, but I'm not dead yet.  Do I think I'm going to settle down with one?  No, probably not because it has always been the work.  It always takes over eventually.  I'm like I have to do the thing.  Okay.  So it’s I'm a workaholic.  [0:56:01.3]

Henry Rollins:  The nature of my work primarily I am a guy onstage every night and that’s a very simple life because you go do a show every night.  The show is not easy, but you book a tour.  It’s now 2011.  I started working on the 2012 tour in the beginning of 2011.  Some of the venues albeit at the end of 2011, we booked like 17 months in advance, so I know kind of sort of where I'm going to be almost every day of the first six months of next year.  Tickets are on sale.  Contracts have been signed.  If I don’t show up I'll be in a whole lot of trouble and I don’t really care about getting sued.  I care about breaking the promise to someone who bought a ticket.  That is the people I answer to.  I answer to my audience.  Lawyers can go take a hike, but the people who let me do what I do I owe them everything and so you must be the French Foreign Legion of your life.  Go okay, here is a year of my life, take it and that is how you get that venue on that major city on that Saturday night because all those who kind of well I kind of want to go on tour, I kind of don’t they didn’t get the worm because the early bird came and got it and that would be me and so I write off entire years at a time of my life.  2012, spoken for unless something really radical happens like an amputation.  I'll probably still make the gig, but unless something you know something bad happens I kind of know where I'm going to be.

So I can go long and so a whole year of my life just gets booked like that.  As I'm out on a thing like that 2013 I start looking at.  In fact, yesterday I was lining up work for 2013 and I was pitching a documentary to a very sturdy, able company who has a great deal of interest in two things I want to do and I don’t know if I'll have time in 2012 to do them, so I'm hoping I can pull them off in 2013.  So I'm already storyboarding 2013.  I architect it.  I'll work here, here and here and I'll travel here, hard ins and outs here and we’ll let August and September kind of be up for grabs and by July we’ll figure out what it’s going to be and so basically I swing from vine to vine.  Some of the vines I know are there because I booked it.  Sometimes the vine is like something is going to come, right, otherwise I'm out of a job.  Something happened and that’s kind of how I've been living for 30 years.  Some are fixed points of opportunity.  Some we roll the dice with a fiscal quarter or two and we see what happens.

I have found every single time I've sat still and as my old manager said, just sit still, work will come to you.  I never trust that.  That is why I have always been proactive, like book a tour because I know I can do that.  I love doing it.  He goes how about we not book a tour for six months and we let the agents takeover and see what we can get you TV and movie wise and voice over wise and with great nervousness I said okay, not trusting that one bit and in that time movies, TV, voice over, all that kind of thing comes my way.  As it is now I'm one of the voices of Verizon.  I am the voice of Infinity car.  I'm on all kinds of cartoons for different companies, documentaries for everything from National Geographic to Smithsonian to Discovery to History you’ll hear my voice.  So I say yes to a lot of stuff.  A lot of things come my way.

So I take some work as it comes and other work I sign up for and manicure and book and sculpt like a tour.  The goal is to work about seven days a week.  The off days you have a moment here or there.  You get some reading done.  You get some creative writing done because you don’t have the **** obligation of a show dangling over your head by the proverbial single horse hair.  So on my nights off on tour—out of about a 30 day month I'll do about 26, 27 shows, on those days off laundry, sushi and creative writing because I don’t have a gig that night.  I can just kind of go let’s see where the brain is at and I can read without thinking I have a show in four hours and so I've learned to balance my life, but primarily I'm a working machine, not about money.  It’s about achievement, excitement, risk because a guy like me shouldn’t be where he is right now, no way.  I can’t hold a note.  I have never taken an acting lesson, so I shouldn’t be anywhere.  The doors that opened for me should have big padlocks on them.

How to Form a Good Habit