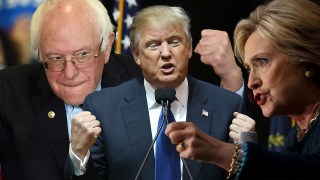 Donald Trump, Hillary Clinton, and Bernie Sanders: The biology of their brains is different from one another, which shows in their speech, behavior, and in who their supporters are.
▸
3 min
—
with
Helen Fisher

There’s a not-too-subtle similarity between the leading GOP candidate, Donald J. Trump, and the alpha male Russian president Vladimir Putin. Both are primarily ruled by testosterone, says biological anthropologist Helen Fisher. Meanwhile, America’s estrogen candidate isn’t who you might expect. Hillary Clinton is too warlike and direct to claim the title. She falls between the barbarism of Trump and the soft, grandfatherly Bernie Sanders. These differences in biology help determine a candidate’s personality and therefore what kind of people they attract to their campaigns.

Helen Fisher: Of course I am extremely interested in the biological aspects of Donald Trump, Hillary Clinton, and Bernie Sanders. Well Trump is all testosterone. This is why Putin likes him. They’re out of the same mold. I mean they’re coming from different countries; they speak different languages; they probably have different things for breakfast, but the bottom line is the temperament is exactly the same. Putin will understand Trump if, in fact, Trump becomes president. And Trump will be able to probably deal with Putin. Now I hope that both of them aren’t so low on impulse control that people push the button at the wrong minute. I mean there’s great benefits to dealing with somebody who’s exactly like you, really, in terms of temperament. But there’s also, you know, great problems. I mean the high-testosterone kind of person is impulsive. They say what they mean. They say it right now. They trample on people’s feelings because being honest is more important than being kind. They’re not great negotiators and we live in a modern world in which negotiation is, in my opinion, absolutely essential. Of course he’s a builder and that’s spatial relations. And that’s testosterone too, so the tough-mindedness and the analytical, spatial understanding is all high testosterone and that’s Donald Trump. I think Hillary Clinton is also high testosterone. She’s direct; she’s decisive; she’s somewhat warlike. But she also has quite a mix of the estrogen. She cares very much for women and for women’s rights. Bernie Sanders seems to be very expressive of the estrogen system. He’s all loving and caring and all these young people who like him I think they like him because they feel he’s a grandfather. Putin won’t understand him and he won’t understand Putin. They are marching to different drummers. The more socially skilled, of course, is Bernie Sanders. And very often a high-estrogen person can run circles around the high-testosterone person because they’re so skilled at negotiating and working things out. So I wouldn’t say that Trump would be any better at getting something done with Putin than Sanders, but they’re going to do it in a very different way. And Putin will not understand Bernie Sanders any more than he understands Barack Obama. Because Barack Obama also has those verbal skills, the people skills, the compassion, the subtlety, the nuance, the caring of the high-estrogen kind of person. And somebody like Putin doesn’t get that.

Hey Bill Nye! How Much Energy Would It Take to Power a Time Machine?