Edward Osborne Wilson is an American biologist (Myrmecology, a branch of entomology), researcher (sociobiology, biodiversity), theorist (consilience, biophilia), and naturalist (conservationism).  Wilson is known for his career as a scientist,[…]
Go to Profile 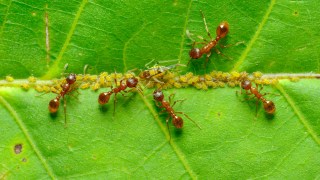 Pheromones and Other Stimuli We Humans Don’t Get, with E.O. Wilson

Biologist Edward O. Wilson takes us through several natural stimuli that humans don't understand yet are used by various animals to navigate and communicate within communities.
▸
7 min
—
with
Edward O. Wilson

Biologist Edward O. Wilson takes us through several natural stimuli that humans don’t understand yet are used by various animals to navigate and communicate within communities. Examples include infrared sensing, echolocation, electrical perception, and pheromones. As the world’s leading expert on ants, Wilson explains how entire colonies structure their societies around the sense of smell and taste via pheromones.

E.O. Wilson: We know less and we understand less of the world around us than any person who doesn't know the evidence can even imagine. We live entirely within a microscopic section of the stimuli that are possible and that flood in on us all the time. Let me give you an example. We think we see everything but we only see the electromagnetic radiation across almost literally relatively a microscopic section of the entire spectrum, you know, running from ultra low frequency radiation to gamma radiation, this vast array we read, we get and we can understand only a tiny, tiny fraction. We're not aware of that. Other animals in the world can read infrared and others can't see red, and some move primarily directed by ultraviolet and so on and we don't know exactly what else is out there. We know that a number of organisms use echolocation; bats are the familiar example. Others echolocate with electrical impulses. They broadcast from their bodies like electric fish and electric eels. We have no sense of that whatsoever and yet bats, for example, can maneuver with fantastic speed and accuracy just using echo locations from their own voices.

But that's just the beginning. We are completely ignorant or unknowing except when we discover it by instruments of the magnetic field of the earth. Birds migrate with it. Many species do.  The entire world of electrical perception. We sense electricity or electric flow only by maybe a sound that it creates or a strange sense of vibration in comfort. Other organisms use it all the time. But most important of all is that we are among the few creatures in the world that live in a primarily audio/visual world. Birds are another example. That's why we love them so perhaps, part of the reason we love them so because they're using the same channels we are. And humans, when you think about it, communicate and they see and they understand almost entirely with hearing and sight. We are miserable when it comes to taste and smell. And I don't care how exquisite the finest restaurants and cuisines of New York's restaurants, we still only sense a tiny fraction of what most of the animal world is sensing.

They live by pheromones. It means that they communicate by chemical smell and taste and they can communicate in a complex manner in this way. For example, in my work, which I began in the late '50s with natural products chemists, I and others found out that ants are communicating by pheromones and that actually they have, according to species, ten to 20 substances that they use to smell and taste in organizing their society. We have no sense of that whatsoever, you know, no way of knowing what they're doing. We just see them running around; they look like they're little particles in brownian movement or forming lines and so on. With those ten to 20 pheromones they use they can vary meaning greatly by how much of the pheromone they release. Sometimes they release it only in billionths of a gram to send a signal, by the context, I mean where it's released and in what social situation gives another meaning, and in combinations, so it's almost like sentences being formed.

An ant that's leaving the nest and is alarmed can release different concentrations that communicate what we would call words: pay attention, pay attention, attention, attention; come in this direction; a problem, a problem; a situation; opportunity; come. And then when it gets to a high concentration, if it's one of their alarm substances it is attack, attack, attack, anything that moves that does not have the colony smell then oh, it's a worker coming home with a rescued larva, step aside, step aside; help clean it; help clean it. It just goes on forever. But the point is that there are worlds out there from bacteria to social insects and onto the mammals, many of the mammals that are operating with pheromones and we have only the barest understanding ourselves. And we've done it through natural products, chemistry and experiments of just what all these creatures are saying to each other. We live, all the time, especially in nature, in great clouds of pheromones. They're coming out in spumes in millionths of a gram that can travel for maybe a kilometer before they attract individuals in; alarm substances; the scent of predators and the scent for the predator, of prey at extremely low levels. And since there are so many species living together in a natural system, for example, 18,000 species live together we now know in the Smoky Mountain National Park of plants and animals and bacteria and so on. We're just beginning to understand how the natural world works. And a large part of it is that it lives in another world from the one we do, the pheromone world.