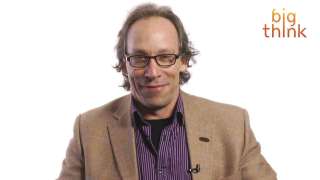 Differential Pay Scales for Teachers in Science and Math

Lawrence Krauss argues for differential pay scales for teachers with advanced training in science and math to accommodate the free market.

I’ve thought a lot about public education and science because it’s important to me that kids get exposure to some of the greatest ideas that humans have ever developed and just to enjoy them. I don’t think there’s one magic bullet to solving our problems of education, but there are a number of issues that I think are useful to consider.

One is we rely too much on teaching answers, on facts. What’s interesting are the questions. The questions are what are natural. Every kid grows up asking where did I come from, where am I my going, you know, am I alone in the universe? These fascinating questions… but they don’t realize that they are the questions that scientists ask. And so I would like to base a curriculum more on questions than answers because the process of asking the questions and figuring out how to address them is what science is all about.

The answers are not important because most kids won’t necessarily become scientists, but the tools of science, of trying to explore the universe and distinguish sense from nonsense and take a complicated situation and simplify it enough to address it. And the fact that science addresses the most remarkable questions that are in each of us, are the things that we want to instill in children.  So it would be great to develop a curriculum where we base it on the very questions that kids are interested in.

I often tell teachers, and it’s true for car salesman or Web producers or everything else, that the biggest mistake any teacher makes is to assume their students are interested in what they're saying. Because if you are a teacher or a writer or anyone else, what you have to do is you have to go out to where they are and convince them that what you’re talking about is relevant to what they’re interested in. You have to seduce them, as I often say.  And seducing them means recognizing that science is actually relevant to the things that they care about. It’s not things rolling down in some inclined plane or boring stuff.  It’s, are we alone in the universe? Can we travel through time? All of those, you know, questions that people are fascinated by.

Now, the problem with this, of course, is that if teachers are going to teach it, they have to be comfortable enough with the material to be able to go off in different directions. And one of the big problems is our teachers aren’t trained in science. I think, some number like close to 90 percent of middle school science teachers don’t have a training in science, beyond the high school level.

Now if you’re not comfortable with the material what you’ll inevitably do is teach to the curriculum. You’ll feel comfortable with the answers that are in the book and you’ll teach to that. So we need to - the real problem, of course, is we need to do a better job of training teachers so that they can feel comfortable to go off in different directions. If they’ll express a level of discomfort, that comes down to the students.

I remember when my daughter was just in grade two, I went in to her class and I saw that her teacher – you know, there they were - what they were learning was that light during the day and dark at night. Trivial little bits of information about the universe. But the teacher was clearly uncomfortable with it. And I was sure that level of discomfort was coming through to the students.

So we have to do a much better job of training teachers. That means we have to build a better curriculum, which, of course, requires more emphasis at the university level. And the realization that when we're teaching students were not trying to make clones of ourselves. When we teach physics, we tend to think that the students - that the results really matter, that everyone needs to know how things will fall down inclined planes. I don’t give a damn about that. I want students to realize the process of how to do it because most of them aren’t going to become physicists, and it doesn’t matter.

It’s that process that will be useful to them later in life. Now, if we are going to spend more time and effort training teachers then in some sense we have to provide them a motivation to become teachers. And one of the things that I would argue, which I know is controversial, is that in some sense we have to consider the competitive environment the teachers find themselves in.

I don’t think that science and math are more important than writing; I believe in communication. It’s incredibly important. I write. But for better or worse, in the free market, if you have a training in science, in general, you can go out and not become a teacher and earn more money than you would if you were a teacher.  So I think we have to consider paying in order to recruit better teachers who have a training in science and mathematics, the possibility of differential pay scales to accommodate the free market. I know many teachers unions would be vastly opposed to that. But I think we at least have to consider that possibility if we want to recruit the people with the skills into the schools to be able to connect with the students.