Daniel Levitin is an award-winning neuroscientist, musician, author and record producer. He is the author of three consecutive #1 bestselling books: This Is Your Brain on Music, The World in Six Songs and The[…]
Go to Profile 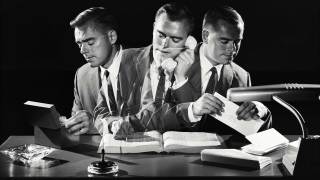 Daniel Levitin:  It turns out that multitasking is a myth. We think that we're doing a whole bunch of things at once. But we're not actually because the brain doesn't work that way. In a number of studies now have shown from Earl Miller's lab at MIT and others that what we're really doing is we're paying attention to one thing for a little bit of time and then another and then another and then we come back around to the first. And all of these are separate projects that are occurring in separate parts of the brain, they require a separate start time, a separate monitoring process. And you end up fractionating your attention into little bits and pieces, not really engaging fully in any one thing. All that switching across tasks comes with a neurobiological cost. It depletes resources. So after an hour or two of attempting to multitask, if we find that we're tired and we can't focus, it's because those very neural chemicals we needed to focus are now gone.
There are some jobs that require, not multitasking because we know it doesn't exist but this kind of a rapid switching, I'm an air traffic controller, simultaneous translator at the UN, journalists, monitoring all these different things at once. And we can take a tip from the air traffic controllers who, as part of their duty cycle, are required after every hour and a half or two hours of work it's mandated that they take a 15 to 30 minute break. And that means an unplugged disconnected break where they go for a walk or listen to music, they exercise, something to restore all of the burned up neurochemicals.

You might ask during this period of our evolution when there's all this information is the brain adapting and changing? And yes it is. The brain adapts and changes all the time. Evolution is happening all the time. Unfortunately it's rather sluggish. We talk about it in terms of evolutionary lag and generally speaking it takes about 20,000 years for the brain to catch up with the way the environment is in terms of how it's encoded in the genome. So 20,000 years from now our brains may have evolved to deal with it. In the meantime we have to employee strategies, just a little bit more self-disciplined then we currently use to filter out unwanted or unnecessary input. I'm not talking about never letting something frivolous or fun in, but I'm talking about adopting a kind of a habit of allowing yourself to focus on one thing at a time for at least a few hours a day.

Are America’s Anti-Drug Laws Scientific? Or Are They Colonialist and Racist?